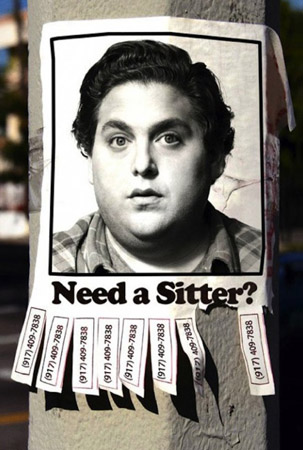 The Sitter could be very loosely considered a remake of the 1987 movie Adventures in Babysitting with Elizabeth Shue. This time Jonah Hill’s Noah Griffith is in the role of the sitter. Both movies involve a babysitter that somehow winds up taking the children they are sitting on some type of misadventure in the big city. That’s where the similarities end. My hopes were for the film to be at least as good as the prior film if not better.

The movie opens with a bang. The opening scene had me thinking “It’s not what it looks like… no wait a sec, it’s exactly what it looks like!”. It is smart, bold, rude, unapologetic and accomplishes a lot in just a couple minutes. It introduces and builds characters and contains humor and pathos. It made me think that I was in for a really great film. I was wrong.

The main weaknesses of the film are lack of character development for much of the characters in the movie, a storyline that is inconsistent and at times makes no sense, and wild wings in tone with far too much drama and a lot of cliches. There are revelations about characters that are unexpected, unwarranted, confusing and have no foundation in their behavior up to that point. For a comedy this film sure has a lot of drama, sad or angry-sacks and plenty of cliched life-lessons. Half the time it is like an after school special.

The story is a big source of problems. For instance, when one of the kids starts destroying valuable objects in the house near the beginning of the film, he doesn’t think to call the parents to ask what he should do or at least to inform them of the destruction. Another big problem : The reason why Noah takes the kids into the city in the first place gets drastically changed about halfway through the film. On top of that, there would not be nearly enough time for the series of events that unfolds. And in many scenes the tone just feels totally wrong, especially in how many of the characters are responding to the situations that they are in.

On the plus side Jonah Hill is perfectly fine as the lead, showing that he can handle dramatic scenes as well as comedy. And one of my favorite actors Sam Rockwell is here playing a wacky character but his normally great screen presence seems diluted here by the awkward dialogue and characterization. Landry Bender also gives a strong performance as the little girl he is babysitting. And the movie does have some witty and intelligent one-liners and some good references. But those elements are not nearly enough to make this a good film. This movie will ave you scratching your head as to why characters are doing the things they are doing and wondering why you should even care.