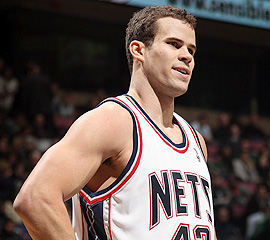 In a recent Nielsen and E-Poll Market Research poll, Kris Humphries gained the status and notoriety of becoming the most disliked player in the NBA.

He achieved the highest dislike rating at 50 percent although I can’t see why. It’s not like he had unsportsmanlike conduct on the floor and he didn’t sell out his team like Lebron James, who came in a close second with 48 percent.

The only logical reason that he could win such a vote has to be his Marriage and subsequent divorce to Kim Kardashian. But even that doesn’t make any sense to me. Either you think that the Kardashians are talentless hacks like Daniel Craig who said in a British GQ article : “You see that and you think, ‘What, you mean all I have to do is behave like a f*cking idiot on television and then you’ll pay me millions”. If you feel that way about the Kardashians, then you should think that he was smart to divorce her.

On the other hand if you like the Kardashians and Kim in general, then you should be happy that they broke up because she is now single again and it makes for a more interesting show.

Either way, I don’t see logically how this would make people dislike him with the possible exception of some of Kim’s female fans being mad at him but thats about it. I think the main reason why he won is simply because of the high profile media attention that he has been getting… or maybe Lebron James found a way to cast millions of votes.

Daniel Craig on the Kardashians