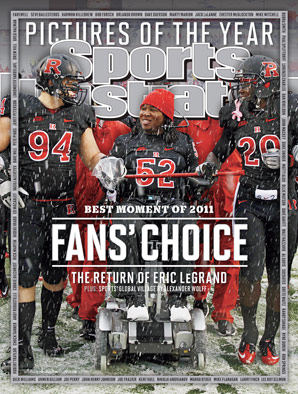 New Jersey native and Rutgers football player Eric LeGrand leading his team onto the field has been voted Sports Illustrated Best Moment of 2011 by SI’s fans.  A picture of a smiling Eric made the cover of this week’s issue to celebrate the winning moment.

On October 16th 2010 Eric suffered a severe spinal cord injury when he collided with an Army player during a kickoff return.  This past October, just a little over a year later, Eric led the team onto the field through the snow before their game against West Virginia.  He is determined to walk again and given his spirit who can doubt him?  He has handled himself with dignity, optimism and humor.

SI fans were asked to go to Facebook and vote on 15 moments from this past year.  Culled from that were the top 5.  Fans then selected from this short list.  This is the first time Sports Illustrated let the fans decide the winning moment of the year.  Eric won with a 29.3% vote.