Game Night for us usually means board games.  Recently, though, we’ve tried some card games and have been enjoying the return to holding a hand of cards and a faster-paced game.  Dutch Blitz is a great game that’s new to us but not that new in the game world. According to the game maker’s website, dutchblitz.com, it was invented by a German immigrant who wanted a game to help teach his children colors and numbers.  Despite the Dutch name, it’s actually more related to the Pennsylvania Dutch/Amish communities than it is to people from Holland. It’s a fun game for young and old.  We played with three adults and had a good time so you don’t need kids to enjoy this card game. 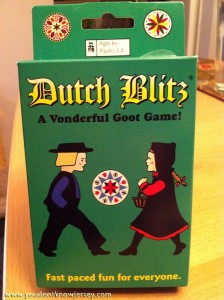 Click on the More…  link to read about the rules and to find out how to buy this game for your next game night!

The rules of this game are pretty easy.  Each person has their own small deck of cards that you set up with a Blitz deck that you are trying to get rid of along with three face up cards you use as holding areas for cards to place in the middle. Each individual deck has a suit on the back so you know which cards are yours at the end of each hand when you’re counting up points.

I played with the Pail deck for most of the night and the other players switched cards a lot thinking they could find their lucky decks eventually.

In the picture below, the Blitz deck is the farthest one on the right above the Plow deck of cards.  The Blitz pile has ten cards and the other three face up cards start out with just one card. 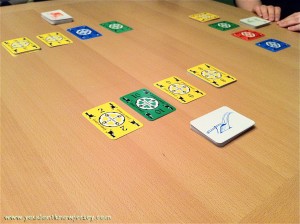 Cards set up and ready to go.

In the middle of the table, you place any card with a one on the face that you come across as you’re going through your deck.  These piles in the middle are how you get rid of cards.  Starting with the one cards, you place cards from your Blitz pile or your holding piles in sequence up to ten. The next picture below shows the game starting to get rolling with some one cards in the middle so we can start moving the cards in an ascending count up to ten.  You can see the cards in the front are descending so that the lower cards are ready for you to put in the middle. 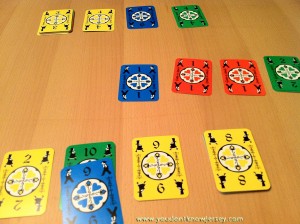 Starting to get some play going.

A hand ends when someone runs out of Blitz cards.  Once someone yells Blitz, all play stops and points are counted up.  All the cards in the middle count as plus points and cards left in your Blitz pile are negative points.  You continue to play hands until someone reaches 75 points.  It took us about five or six hands for someone to reach 75 points.  We played three total games and played for about an hour and a half.

Here’s a picture of the end of a hand before we count up the points. You can see that the player sitting at the far end of the table was the one who yelled Blitz because he only has three piles in front of him. 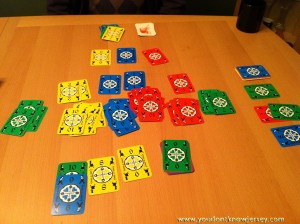 Someone gets a blitz!

It’s a little bit messy because the gaming is pretty intense once you’re racing to get your cards on the pile before anyone else. Here, Jeff has beat me to getting the blue six on the pile so I have to wait for another blue pile to reach the six card. 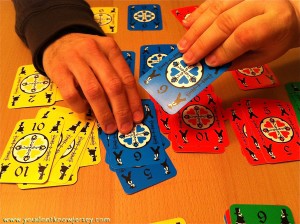 Jeff beats Alice to laying down the blue six.

This was a really fun game and only took about ten or fifteen minutes to go through all the instructions and learn how to set up the different piles.  We played one practice round for no points and then we were off and running.  I recommend this game especially if you have card players, a group of mixed-age players or if you don’t feel like learning a really complicated game.

We bought our deck on Amazon.  The game’s website has a list of other retailers that carry the game, too.

We can’t wait to tell you about more games that we love in future Game Night in New Jersey posts.  If you love a game and wish more people knew about it, send me an email and we’ll try it out if we haven’t already played it.

Pin It
Previous post:
Things to do in Jersey – January 27 28 29 2012 Next Post:
Rutgers’ Loss Is Buccaneers’ Gain – Coach Greg Schiano Heads To Tampa