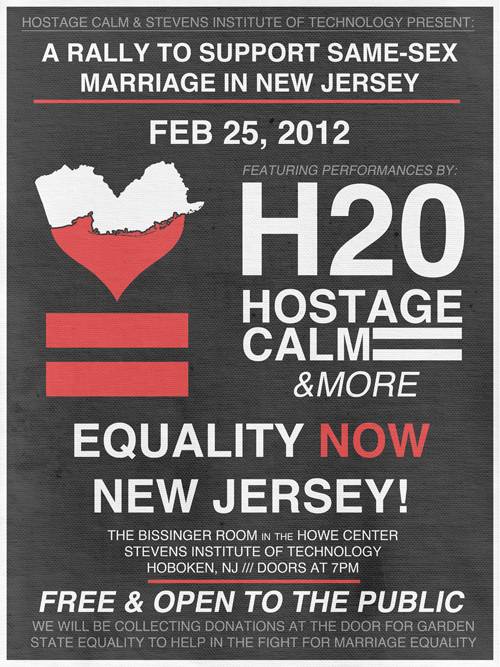 In anticipation of impending legislative action on Same-Sex Marriage in New Jersey, Hostage Calm has organized a rally in support of the cause.

The rally will take place on Saturday, February 25th at Stevens Institute of Technology in Hoboken and will feature performances by H20 and Hostage Calm. The event is free and open to the public.

Cmar, the vocalist of Hostage Calm had this to say on the bands involvement:

“Across this country, I’ve seen crowded rooms of anxious people ready to participate, ready to express themselves, ready to engage. It seems like all of us are always ready to be heard, but this world is so rarely prepared to hear us. Yet every once and a while, a clear opportunity arises. Marriage Equality is a defining social issue of our time, and it is being decided–for good–right now. We need to channel the enthusiasm and the commitment to justice that lies dormant in underground music and use it to bring real change to America.”

The New Jersey marriage equality bill is expected to come to a vote in the Democrat-controlled state legislature this month. Republican Governor Chris Christie has vowed to veto it.

The band plans to have literature, raffles and other opportunities to get involved at the rally. Though the show is free, the band will also be collecting donations for Garden State Equality, the state’s largest civil rights organization.

A rally to support same-sex marriage with:

@ The Bissinger Room in the Howe Center

Free and open to the public

Hostage Calm stressed the role of fans and activists and encouraged them to lend any talents to the movement by emailing them at ballotsstones@gmail.com.

Czmar and Hostage Calm have also expanded on their thoughts and future plans in a letter on their tumblr page at www.hostagecalm.net. The band plans to announce additional initiatives inNew Jersey and Maryland in the coming weeks.