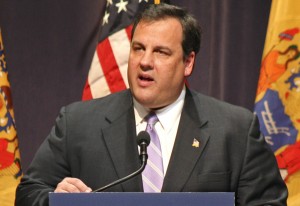 New Jersey Governor Chris Christie has ordered flags to fly at half staff this Saturday in honor of the late pop icon and NJ native, Whitney Houston. Her private funeral will take place in Newark this Saturday while being streamed live on the internet (noon EST on Saturday, on nbcnewyork.com).

The governor says Houston was a “cultural icon” who belongs in the same category in New Jersey music history as Frank Sinatra, Count Basie and Bruce Springsteen. However some NJ residents do not agree and sent emails and placed calls to the governor’s office criticizing him for his decision. Many people feel that the executive order of lowering the flag should be reserved for military personnel, first responders and elected officials. Others feel her drug use deems her not worthy of such an honor. Christie defended his decision by saying that Houston deserves the honor, not because she was a role model, but because of her huge cultural impact and as “a daughter of New Jersey.”

Due to the media’s extensive coverage of Whitney Houston’s untimely death, it is the first time many people have been made aware of this executive order that can be made by the governor. Thus far in his term as governor Christie has ordered the flying of the flag at half staff 30 times for the death of military personnel and 3 times for NJ police officers killed in the line of duty. He has has also given this order for 2 Congressman, 2 Assemblymen and 1 Senator, as well as on the anniversary of 9/11 every year he has been in office.

Ms. Houston is not the first celebrity to have been given this honor by our current governor. In June of last year Governor Christie ordered that the flag be flown at half-staff in recognition and mourning of the passing of Clarence Clemons who was a member of New Jersey native Bruce Springsteen’s E Street Band.

Do you agree with Governor Christie’s decision?

Official Website of the State of New Jersey: Executive Orders