Ali Larter was born in Cherry Hill today in 1976. 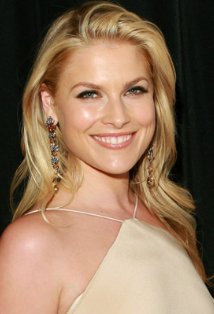 Larter is the daughter of Margaret, a realtor, and Danforth Larter, a trucking executive. She attended Carusi Middle School and later graduated from Cherry Hill High School West during her time as a model.

Larter began her modelling career at the age of 14 when a modelling scout discovered her on the street and was asked to star in a Phillies commercial, this led to a modeling contract with the prestigious Ford Modeling Agency in New York. Larter subsequently skipped her senior year to model in Australia, Italy and Japan. She would temporarily settle in Italy at the age of seventeen.

While modelling in Italy, Larter met fellow model and aspiring actress Amy Smart and the two “became instant friends”, according to Larter. A modelling job later took her to Los Angeles and while there she decided to take acting classes with Smart. The two then moved into an apartment together. Larter is currently signed to IMG Models.

Larter landed her first professional acting roles in 1997 when she appeared in several television programs. She appeared in an episode of the Brooke Shields television series Suddenly Susan, and the short-lived series Chicago Sons. These roles were followed by a number of other appearances on Dawson’s Creek, Chicago Hope, and Just Shoot Me!

In 1999, Larter began her film career with an appearance in Varsity Blues, which re-united her with Dawson’s Creek star Van Der Beek and close friend Amy Smart. Varsity Blues drew a domestic box office gross of $53 million. That year she made appearances in the teen comedies Giving It Up and Drive Me Crazy. Larter also starred in the horror remake House on Haunted Hill. The movie was panned by critics, but grossed $15 million on its opening weekend and went on to earn over $40 million overall.

In 2000, Larter starred as one of the main characters, Clear Rivers, in the teen supernatural horror film Final Destination. Also starring Devon Sawa and Kerr Smith, the movie’s premise followed several teenagers who survive a plane crash but are stalked and killed by death itself. Final Destination made $112 million by the end of its theatrical run. The following year, she appeared in the comedy Legally Blonde with Reese Witherspoon. She played Brooke Taylor Windham, a widow accused of her husband’s murder. The film earned the top spot with $20 million in its opening weekend and ended up grossing $141 million worldwide. With $96 million of it total gross deriving from domestic markets, Legally Blonde is Larter’s highest grossing film domestically.

Larter next appeared as Zerelda Mimms in the western comedy American Outlaws. Directed by Les Mayfield and co-starring Colin Farrell and Scott Caan, the movie was poorly received by critics and at the box office making $13 million at the end of its theatrical run. She also starred in Kevin Smith’s Jay and Silent Bob Strike Back. That year, Larter appeared on the cover of Maxim magazine and performed in the stage play The Vagina Monologues in New York City. In Spring 2002, Larter moved from Los Angeles to New York.

Her first project there was to reprise her role as Clear Rivers in the sequel Final Destination 2. A year later, Larter served as an associate producer of and starred in the thriller Three Way. In 2005, Larter appeared in the independent political thriller, Confess, and had a role in the romantic comedy A Lot Like Love alongside Amanda Peet and Ashton Kutcher.

Larter moved back to Los Angeles in 2005. Her first audition was for the NBC science fiction drama television series Heroes. Larter played the characters of Niki Sanders and Tracy Strauss on the show created by Tim Kring. Larter’s initial character Niki Sanders, was a wife, mother, and a former internet stripper from Las Vegas who exhibits superhuman strength and alternate personalities who go by the names of Jessica and Gina.

Pin It
Previous post:
Gothamist Posts Fascinating Info on the 1934 Plan To Fill In The Hudson River Connecting NYC To NJ Next Post:
Things to do in Jersey – March 2 3 4 2012