Astronaut Mark Kelly was born in Orange today in 1964.  Along with being a decorated Naval aviator and retired astronaut, he’s also the husband of former Congresswoman Gabrielle Giffords who was shot in Arizona. 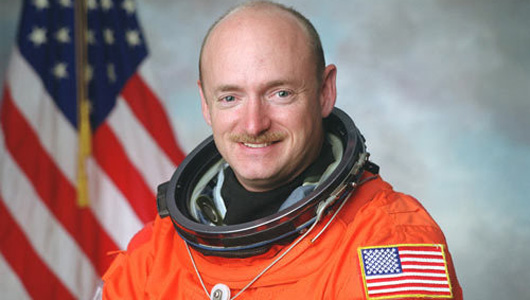 Mark Edward Kelly is the son of Richard and Patricia Kelly, two retired police officers. He was born in Orange and raised in West Orange. Kelly graduated from Mountain High School in 1982. He received a B.S. degree in marine engineering and nautical science from the United States Merchant Marine Academy graduating with highest honors in 1986. In 1994, he received an M.S. degree in aeronautical engineering from the U.S. Naval Postgraduate School.

In December 1987, Kelly became a United States Naval aviator and received initial training on the A-6E Intruder attack aircraft. He was then assigned to VA-115 (Attack Squadron 115) in Atsugi, Japan, and made two deployments to the Persian Gulf on the aircraft carrier USS Midway flying 39 combat missions in Operation Desert Storm. After receiving his master’s degree he attended the U.S. Naval Test Pilot School from June 1993 to June 1994. He has logged more than 5,000 hours in more than 50 different aircraft and has over 375 carrier landings.

On June 21, 2011, Kelly announced his retirement from the U.S. Navy and NASA, effective October 1, 2011. His retirement was announced on his Facebook page, where he wrote, “Words cannot convey my deep gratitude for the opportunities I have been given to serve our great nation. From the day I entered the United States Merchant Marine Academy in the summer of 1982 to the moment I landed the Space Shuttle Endeavour three weeks ago, it has been my privilege to advance the ideals that define the United States of America.”