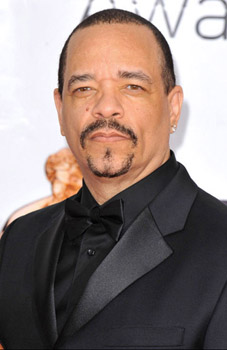 Ice-T was born Tracy Marrow, son of Solomon and Alice Marrow in Newark. As a child, his family moved to Summit. Solomon was an African American, and Alice was Creole. For decades, Solomon worked as a conveyor belt mechanic at the Rapistan Conveyor Company. Alice died of a heart attack when Tracy was in third grade. Solomon raised Tracy as a single father for four years, with help from a housekeeper. When Tracy was 12 years old, Solomon died of a heart attack.

Following his father’s death, Tracy lived with a nearby aunt briefly, and was sent to live with his other aunt and her husband in View Park, a middle-class black neighborhood in Los Angeles. While his cousin Earl was preparing to leave for college, Tracy shared a room with him. Earl was a fan of rock music and listened to only the local rock stations; sharing a room with him spurred Tracy’s interest in heavy metal music.

Tracy attended Palms Junior High, which was predominately made up of white students, and included black students bused in from South Central. After graduating, he attended Crenshaw High School, which was almost entirely made up of black students. Marrow stood out from most of his friends because he did not drink alcohol, smoke tobacco or use other drugs. During high school, gangs began to intensify in the Los Angeles school system. Tracy aligned with the Crips, and began reading the novels of Iceberg Slim, which he memorized and recited to his friends, who enjoyed hearing the excerpts and told him, “Yo, kick some more of that by Ice, T,” and the handle stuck.

At the age of 17, Tracy received the Social Security death-benefit money for the death of his father to rent an apartment for $90 a month. Marrow sold cannabis and stole car stereos for money, but was not making enough money to support his girlfriend and daughter, leading him to join the United States Army for the financial benefits; he served for four years in the 25th Infantry Division. His commanding officer ordered Marrow to lead a group of soldiers to steal some supplies for him. Marrow and the group were jailed for the theft of an infantry rug. While awaiting trial, he received a $2,500 bonus check, and decided to escape from the jail and desert his Army duties, returning a month later after the rug had been returned. He received an Article 15 non-judicial punishment, and completed Advanced Infantry Training.

Marrow became interested in hip hop music while serving in the Army. During this period, he heard Sugar Hill Gang’s newly-released single “Rapper’s Delight,” which inspired him to perform his own raps over the instrumentals of this and other early hip-hop records, but the music did not fit his lyrics or form of delivery, leading Marrow to try to develop his skills as a rapper.

As a squad leader at Schofield Barracks, Marrow met a real-life pimp named Mac in Hawaii, where prostitution was not heavily prosecuted, due to the high level of visits from soldiers during their weekends, as well as tourists, in order to keep the level of violence low. Mac admired that Marrow could quote Iceberg Slim, and taught Marrow how to pimp. Marrow was also able to purchase stereo equipment cheaply in Hawaii, including two Technics turntables, a mixer, and large speakers, and began to learn turntablism and rapping.

Towards the end of his time in the Army, Marrow learned from his commanding officer that he could receive an honorable discharge and leave the Army early because he was a single father, and left four months ahead of schedule.

After leaving the Army, Marrow wanted to stay away from gang life and violence, and decided to make use of the stereo equipment he had purchased in Hawaii, and make a name for himself as a disc jockey. As a tribute to Iceberg Slim, Marrow adopted the stage name Ice-T. While performing as a DJ at parties, he received more attention as a rapper, and decided to pursue a career as a rapper. After breaking up with his girlfriend Adrienne, he returned to a life of crime, and robbed jewelry stores with his high school friends, pretending to be customers in order to plan the thefts, and later smashing the display glass with baby sledgehammers, events Marrow later described in his raps.

One of Marrow’s friends, Sean E. Sean, was arrested for possession of not only cannabis, which Sean sold, but also material stolen by Marrow. Sean took the blame, and served two years in prison. Marrow stated that he owed a gratitude to Sean, because his prison time allowed Marrow to pursue a career as a rapper. Concurrently, Marrow wound up in a car accident and was hospitalized as a John Doe because he did not carry any form of identification due to his criminal activities. After being discharged from the hospital, he decided to abandon the criminal lifestyle and pursue a professional career rapping. Two weeks after being released from the hospital, he won an open mic competition judged by Kurtis Blow.

In 1982, Marrow met producer William Strong from Saturn Records, who recorded his first single, “Cold Wind Madness,” also known as “The Coldest Rap,” which became an underground success, becoming popular even though radio stations did not play it due to the song’s hardcore lyrics.

Marrow received further inspiration as an artist from Schoolly D’s gangsta rap single “P.S.K. What Does It Mean?” which Marrow heard in a club. Marrow decided to adopt Schoolly D’s style, and wrote the lyrics to his first gangsta rap song, “6 in the Mornin'” in his Hollywood apartment, and created a minimal beat with a Roland TR-808. Marrow compared the sound of the song, which was recorded as a B-Side on the single “Dog’n The Wax” to that of the Beastie Boys. The single was released in 1986, and Marrow learned that “6 in the Mornin'” was more popular in clubs than its A-side, leading Marrow to rap about Los Angeles gang life, which Marrow described more explicitly than any previous rapper. He intentionally did not represent any particular gang, and wore a mixture of red and blue clothing and shoes to avoid antagonizing gang-affiliated listeners, who debated his true affiliation.

Ice-T finally landed a deal with a major label Sire Records. Shortly after, he released his debut album Rhyme Pays in 1987 supported by DJ Evil E, DJ Aladdin and producer Afrika Islam, who helped create the mainly party-oriented sound. The record wound up being certified gold by the RIAA. That same year, he recorded the title theme song for Dennis Hopper’s Colors, a film about inner-city gang life in Los Angeles. His next album Power was released in 1988, under his own label Rhyme Syndicate, and it was a more assured and impressive record, earning him strong reviews and his second gold record. Released in 1989, The Iceberg/Freedom of Speech… Just Watch What You Say established his popularity by matching excellent abrasive music with narrative lyrics.

In 1991, he released his album O.G. Original Gangster, which is regarded as one of the albums that defined gangsta rap. On OG, he introduced his heavy metal band Body Count in a track of the same name. Ice-T toured with Body Count on the first annual Lollapalooza concert tour in 1991, gaining him appeal among middle-class teenagers and fans of alternative music genres. The self-titled debut album by Body Count followed. For his appearance on the heavily collaborative track “Back on the Block,” Ice-T won a Grammy Award for the Best Rap Performance by a Duo or Group, an award shared by others who worked on the track including Jones and fellow jazz musician Ray Charles.

Controversy later surrounded Body Count over its song “Cop Killer,” a song intended as a narrative from the view of a criminal getting revenge on racist police officers guilty of brutality, from the National Rifle Association and various police advocacy groups. Consequently, Time Warner Music refused to release Ice-T’s upcoming album Home Invasion because of the controversy surrounding “Cop Killer.” When Ice split amicably with Sire/Warner Bros. Records after a dispute over the artwork of the album Home Invasion, he reactivated Rhyme Syndicate and formed a deal with Priority Records for distribution. Priority released Home Invasion in the spring of 1993. The album peaked at #9 on Billboard magazine’s Top R&B/Hip-Hop Albums and at #14 on the Billboard 200, spawning several singles including “Gotta Lotta Love,” “I Ain’t New To This” and “99 Problems.” Ice-T had also collaborated with certain other heavy metal bands during this time period. For the film Judgment Night, he did a duet with Slayer on the track “Disorder,” In 1995, Ice-T made a guest performance on Forbidden by Black Sabbath. Another album of his, VI – Return of the Real came out in 1996, followed by The Seventh Deadly Sin in 1999.

Ice-T’s first film appearances were in the motion pictures, Breakin’ (1984), and its sequel, Breakin’ 2: Electric Boogaloo (1985). These films were released before Ice-T released his first LP, although he appears on the soundtrack to Breakin’.

In 1991 he embarked on a serious acting career, portraying police detective Scotty Appleton in Mario Van Peebles’ feature film New Jack City, gang leader Odessa (alongside Denzel Washington and John Lithgow) in Ricochet (1991), gang leader King James in Trespass (1992), followed by a notable lead role performance in Surviving the Game (1994), in addition to many supporting roles, such as J-Bone in Johnny Mnemonic (1995), and the marsupial mutant T-Saint in Tank Girl (1995).

In 1995 Marrow had a recurring role as vengeful drug dealer Danny Cort on the television series New York Undercover, co-created by Dick Wolf. His work on the series earned him the 1996 NAACP Image Award for Outstanding Supporting Actor in a Drama Series. In 1997 Marrow co-created the short-lived series Players, produced by Wolf. This was followed by a role as pimp Seymour “Kingston” Stockton in Exiled: A Law & Order Movie (1998). These collaborations led Wolf to add Marrow to the cast of Law & Order: Special Victims Unit. Since 2000 he has portrayed Odafin “Fin” Tutuola, a former undercover narcotics officer transferred to the Special Victims Unit. In 2002 the NAACP awarded Marrow with a second Image Award, again for Outstanding Supporting Actor in a Drama Series, for his work on Law & Order: SVU.

The rest is music and Hollywood history.

Pin It
Previous post:
Visiting Grover Cleveland’s Birthplace in Caldwell for our 1,000th Post! Next Post:
Governor Christie Orders Flags to Fly at Half Staff for Whitney Houston