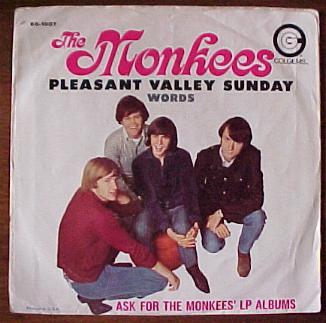 You may have heard that Davy Jones, of the Monkees, died today.  While he had little to no connection to New Jersey, one of the Monkees’ greatest hits does.

“Pleasant Valley Sunday” was written by Gerry Goffin and Carole King in 1967. Their inspiration for the name was a street named Pleasant Valley Way, in West Orange, where they were living at the time. The road, also known as Essex County Road 636, begins in Verona near Bloomfield Avenue and Verona Park and follows a valley through several communities among the Watchung Mountains. It ends in South Orange at Northfield Avenue at the edge of South Mountain Reservation.

King and Goffin had moved from Brooklyn to West Orange shortly before they penned “Pleasant Valley Sunday.” They wrote the song as a social commentary on status symbols, creature comforts, life in suburbia, and “keeping up with the Joneses.” King remained in West Orange after she and Goffin divorced and it’s where she wrote most of Tapestry.

The single peaked for the Monkees at #3 on the Hot 100 and was featured in the second season of their television series. The song also appeared on the fourth Monkees album, Pisces, Aquarius, Capricorn & Jones Ltd., in November 1967. While the mono copies of the album had the same version as heard on the single, stereo copies had a version using a different take of the first verse and an additional backing vocal during the break.

Read more about Pleasant Valley Sunday on 2 or 3 Lines (and so much more).