I can’t say I’m a regular watcher of Celebrity Apprentice, though I have seen a few episodes.  I find Donald Trump’s children even more unappealing than The Donald himself so it’s just a cringe-filled hour of television for me.  This year’s cast is somewhat appealing though and I’m tempted to watch a few episodes just for George Takei, Debra Gibson and Cheryl Tiegs. 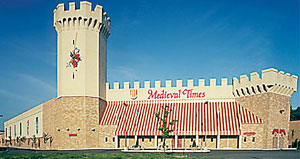 Well, now I have another reason to watch this Sunday.  Lyndhurst’s Medieval Times is going to be featured.

According to a Bergen.com article, the two teams of celebrities had to create a new storyline for the Medieval Times cast.  The episode was filmed over a few days last October.

Sounds like a fun task and definitely worth having to endure some Trumps to tune in.