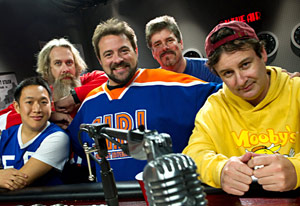 There were a lot of reasons to watch Kevin Smith’s new show ‘Comic Book Men’ on AMC. First, I have seen all of Kevin Smith’s films. Second,  I am a big fan of comic books and ran my own store. And third, the show is set in New Jersey.

The producers of the show are pretty much dead set on making it a clone of ‘Pawn Stars’ but instead of being set in a pawn shop, it’s set in a comic book store.

Kevin Smith hosts and moderates the pod-cast segments of the show which include some brief discussions about comic book subjects as well as talking about things that occurred at the store.

The cast at the store includes the manager, 2 workers and a guy that seemingly just hangs out there all the time. The nature of their jobs at the store isn’t fully explained. I also would have liked to see more about the history of the store like when it was opened, the layout and a general profile. All we really get is a receipt at the beginning giving the name address and phone number in a quick flash.

The discussions they have about anything comic related range from adequate to short and superficial. The conversation about what their favorite horror movie was pretty decent but could have been more involved. It feels like there’s some sort of time limit. I guess the makers of the show don’t want to alienate anyone that may not be able to follow along with the conversation even though many people watching are probably already interested in the subject. It also feels like they are trying as hard as they can to tell a joke even if it would be more interesting to say something insightful about the subject they are discussing.

The ‘Pawn Stars’ segments dominate the show and they mimic the tone as well. One of the things both shows have in common is that they do something that is never done in real life. Namely, they fawn all over the stuff that the seller has brought in and put it up on a pedestal. Obviously it is not in the buyers best interest to make the seller think they have brought in something spectacular but both shows do that. On top of that it is standard procedure to explain from the outset that you are going to pay them 30-60% of the retail price so that the seller doesn’t stupidly ask for you to pay 100% of the retail price as happens a lot on these types of shows.

Plus they are always emphasizing cash. Do they edit out the part where they offer store credit, a much preferred method for the store considering they have tons of stock and they could give the seller roughly double in credit what they could in cash. When a fan comes in, there should be plenty they could choose from unless they are truly desperate for money. One thing that was very common is the customer who came in with the Dawn of the Dead lobby cards and poster that he had totally overvalued especially in the lousy condition the poster was in. That used to happen all the time. For this customer, they brought in Robert Bruce who is a customer that has a knowledge of collectibles and knows how to deal with these people. Ideally they should have someone like him as an employee.

They even had a vague contest where the 2 workers and heavy bearded guy go to Collingswood Auction & Flea Market to see who can make the most money trying to get rid of crap that really isn’t worth anything. Kevin Smith talks up the Flea Market like it some type of Mecca and cultural touchstone. Now don’t get me wrong, I have been to Collingswood and I do think it is very interesting and all of the things that he said but it seems like a glaring omission to not mention Englishtown. Englishtown is much bigger and the premier Auction and Flea Market in New Jersey and it is not that far from Collingswood. Maybe they feel that it is more universal and too mainstream or they couldn’t get permission to film there. That’s the only thing I can come up with but personally I feel it has more personality than Collingswood.

The other thing that stood out to me was the behavior at the Flea Market. This isn’t the Boardwalk where people are soliciting people walking by to go try their game. If you are walking around at Collingswood, it would be extremely rare to be passing a table and have the person running it start trying to talk you into buying something and start asking you questions. If you stop at their table and start looking around, the standard behavior would be to let them know to ask if they have questions or if there is anything they are looking for. But I guess that would have defeated the point of the challenge.

In the challenge Bryan starts harassing Ming and even destroying his merchandise. I was very happy to see a bystander at the Flea Market tell him that it wasn’t acceptable behavior and tell him to pay Ming for the merchandise. Then Bryan basically continued to argue with the guy and said that he may go over to his table and pay for some items so that he could destroy them as well. What a great guy! Bryan and Mike pack up to leave as they have sold all of their stuff but not before making fun of Ming. Ming sticks around and a regular store customer stops by and takes the rest of the table. Frankly it seems like the reason that this happens is that the producers of the show didn’t want the audience to have the bad taste in their mouth of Bryan treating Ming like a punching bag and winning the challenge to boot.

I would also like to point out comic book fans don’t simply think that everything done in the comics or movies is a good thing. The conversation they have about the Christian Bale “growl” voice he does as Batman has taken place at comic stores and conventions. In the discussions that I have been part of it has been a debate, not a one-sided agreement that entertainment is unquestionable. People mostly made fun of and derided it as being a combination of annoying and ineffective. It sounds like he has a sore throat and if he doesn’t have one, doing the voice will give him one. It comes across as extremely forced and is almost painful to listen to. An Alec Baldwin type delivery would be much more natural and effective. Yes, the Christopher Nolan and Christian Bale version of Batman is the first time the character was done correctly and the movies represent top level film making but that doesn’t mean that everything about them is perfect.

This show has potential and I will surely keep watching in anticipation of the episode where Ming takes a bat to Bryan. Despite being mean to Ming however, Bryan easily has the funniest and most entertaining comments of anyone working at the store. The show needs less ‘Pawn Stars’ and more of what goes on at the store and especially the conversations that the workers have with the customers that are coming in to buy stuff, not sell it. I can personally attest to the fact that much more interesting conversations have taken place in comic stores than the ones you witnessed on the show so far. Just because people know things about a topic and love it still doesn’t mean that they can make it entertaining, funny or interesting. Here’s to hoping that they do a better job of it as the season progresses.

Pin It
Previous post:
Things to do in Jersey – February 17 18 19 2012 Next Post:
Carjackings On The Rise In New Jersey : How To Protect Yourself