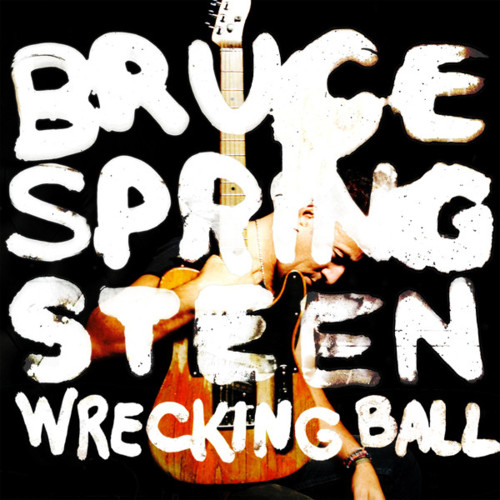 Bruce Springsteen’s 17th studio album, Wrecking Ball, finds The Boss not very happy with the state of things in America.  We had a taste of this when Bruce released the single “We Take Care Of Our Own” back in January.  Many people missed the irony of that song as they did “Born in the USA” in the 80s.  The songs that follow here hammer the point home that we are in for a dark ride.  Bruce sings of fat cats, marauders and robber barons.  The downtrodden in these songs are pissed off and blame the 1% for their fates.  In fact they are angry enough in “Easy Money” to pick up a Smith & Wesson .38 to get a little of that money back. However all is not lost  There is some hope in the despair.

In “Shackled and Drawn” the singer asks “What’s a poor boy to do in a world gone wrong… [where]… It’s still fat and easy up on banker’s hill.”  As in many Springsteen songs you work, pray, and stand up.  In “Jack of All Trades” the singer will take just about any job to keep afloat.  Bruce sings over piano “So you use what you’ve got, And you learn to make do.”  But those bankers better watch out because if he had a gun “I’d find the bastards and shoot ’em on sight.”

One the highlights on the album is “Death To My Hometown.”  Starting with drums and penny whistle I thought my iTunes might have jumped to a Pogues song.  Bruce sings “No cannonballs did fly, no rifles cut us down, no bombs fell from the sky, no blood soaked the ground.”  Maybe not but the devastation left behind by the people in power is sometimes just as destructive to families and towns.  These vultures did indeed pick the bones of the working class.  The song “This Depression” rounds out the first half of the album.  Who wouldn’t be depressed with the current state of affairs.  Beautiful guitar work by a guest guitarist, Rage Against the Machine’s Tom Morello, lift this song from the ordinary to something special.

With the title track the music and tone get a little lift.  “Wrecking Ball,” written about the then soon-to-be destroyed Giant Stadium, is actually almost cheery.  For a song about the razing of an old stadium I can easily hear this blaring live when the tour starts in stadium all over the world.  Bruce wants us to “Hold tight to your anger, and don’t fall to your fear.”  This is as close as a ray of hope that we’ve heard up to this point.

“Rocky Ground” is about the most experimental I’ve ever heard Springsteen get musically.  It opens with an excerpt from “I’m a Soldier in the Army of the Lord,” a traditional song recorded in 1942 at a church in Clarksdale, Mississippi.  A very gospel-like opening on a record that has touches of faith all over it.  This is in the lyrics as well with references to flocks, glory and kingdoms.  In what I think is the first taste of rap (!) ever on a Springsteen record, guest vocalist Michelle Moore adds “You pray that the hard times, hard times, come no more.”  This experiment works.

In the second to last song we get the classic Springsteen sound in the 2000 song “Land Of Hope and Dreams.”  We’ve come through the darkness and Bruce is going out with a positive attitude.  “This train, faith will be rewarded, This train, hear the steel wheels singin’, This train, Bells of freedom ringin’.”  We are also treated to one of the two appearances by the late, great Clarance Clemons on this track.  The album also features trumpet, trombone, clarinet and tuba in places.  But the sound of the Big Man’s saxophone on this track reminds us of what huge loss we are left with in his absence.

The closer “We Are Alive” is a country/folk song that would not be out of place on “We Shall Overcome: The Seeger Sessions.”  It is a light song and might just be the best way to end.

“Wrecking Ball” is not a perfect album.  Some of the themes and lyrical images are overused.  The song “You’ve Got It” is a slight song and really stands out of place here.  However, Springsteen and producer Ron Aniello have crafted a challenging and different kind of Bruce record.  The album gets better each time I play it.  These are bleak times.  Springsteen shows us that he understands and sympathizes.  He also offers us hope that times will get better.  Who are we to argue.