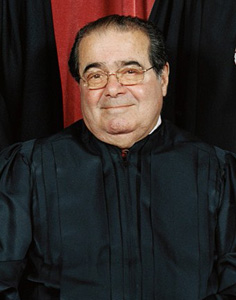 An only child, Antonin Scalia was born in Trenton. His father, Salvatore Eugene Scalia, was an immigrant from Sicily who was a graduate student and clerk at the time of his son’s birth, but who later became a professor of Romance languages at Brooklyn College. His mother, Catherine Scalia (née Panaro), was born in the United States to Italian immigrant parents, and worked as an elementary school teacher.

When Antonin was six years old, the Scalia family moved to Elmhurst, Queens, in New York City. Antonin’s parents drove the boy to excel in his schoolwork. After completing eighth grade in public school, he obtained a scholarship to Jesuit-run Xavier High School in Manhattan, where he graduated first in his class. Scalia later stated that he spent much of his time on schoolwork, and admitted, “I was never cool.”

On September 10, 1960, Scalia married Maureen McCarthy, whom he met on a blind date while he was at Harvard Law School. Maureen Scalia had been an undergraduate at Radcliffe College when the two met, and subsequently obtained a degree in English from the school. The couple raised nine children, five boys and four girls.

Scalia began his legal career at Jones, Day, Cockley and Reavis in Cleveland, Ohio, where he worked from 1961 to 1967. He was highly regarded at Jones Day and would most likely have made partner, but later stated he had long intended to teach. He became a Professor of Law at the University of Virginia in 1967, moving his family to Charlottesville, Virginia.

After four years in Charlottesville, in 1971, Scalia entered public service. President Richard Nixon appointed him as the general counsel for the Office of Telecommunications Policy, where one of his principal assignments was to formulate federal policy for the growth of cable television. From 1972 to 1974, he was the chairman of the Administrative Conference of the United States, a small independent agency that sought to improve the functioning of the federal bureaucracy. In mid-1974, Nixon nominated him as Assistant Attorney General for the Office of Legal Counsel. After Nixon’s resignation, the nomination was continued by President Gerald Ford, and Scalia was confirmed by the Senate on August 22, 1974.

In the aftermath of Watergate, the Ford administration was engaged in a number of conflicts with Congress. Scalia repeatedly testified before congressional committees, defending Ford administration assertions of executive privilege in refusing to turn over documents. Within the administration, Scalia advocated a presidential veto for a bill to amend the Freedom of Information Act, greatly increasing its scope. Scalia’s position prevailed and Ford vetoed the bill, but Congress overrode it. In early 1976, Scalia argued his only case before the Supreme Court, Alfred Dunhill of London, Inc. v. Republic of Cuba. Scalia, on behalf of the U.S. government, argued in support of Dunhill, and that position prevailed.

Following Ford’s defeat by President Jimmy Carter, Scalia worked for several months at the American Enterprise Institute. He then returned to academia, taking up residence at the University of Chicago Law School from 1977 to 1982, though he spent one year as a visiting professor at Stanford Law School. In 1981, he became the first faculty adviser for the University of Chicago’s chapter of the newly founded Federalist Society.

When Ronald Reagan was elected President in November 1980, Scalia hoped for a major position in the new administration. He was interviewed for the position of Solicitor General of the United States, but the position went to Rex E. Lee, to Scalia’s great disappointment. Scalia was offered a seat on the Chicago-based United States Court of Appeals for the Seventh Circuit in early 1982, but declined it, hoping to be appointed to the highly influential United States Court of Appeals for the District of Columbia Circuit (D.C. Circuit). Later that year, Reagan offered Scalia a seat on the D.C. Circuit, which Scalia accepted. He was confirmed by the United States Senate on August 5, 1982, and was sworn in on August 17, 1982.

The rest is judicial history.