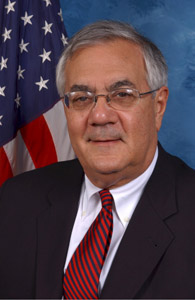 Frank was born Barnett Frank to a Jewish family in Bayonne one of four children of Elsie (née Golush) and Samuel Frank.

Frank’s father ran a Jersey City truck stop — a place Frank describes as “totally corrupt” — and served a year in prison, when Frank was 6 or 7, for refusing to testify to a grand jury against Frank’s uncle. Frank was educated at Harvard Collegee, graduating in 1962. Frank’s undergraduate studies were interrupted by the death of his father, and Frank took a year off to help resolve the family’s affairs prior to his graduation. In 1964, he was a volunteer in Mississippi during Freedom Summer. He taught undergraduates at Harvard while studying for a Ph.D. in Government, but left in 1968 before completing the degree, to become Boston mayor Kevin White’s Chief Assistant, a position he held for three years. He then served for a year as Administrative Assistant to Congressman Michael J. Harrington. Frank later graduated from Harvard Law School, in 1977, where he was once a student of Henry Kissinger, while serving as Massachusetts State Representative.

The rest is political science history.