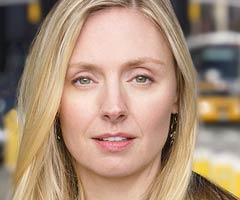 Davis, second of three children, was born in Englewood, the daughter of Joan, a librarian, and William Davis, an engineer. Davis graduated in 1982 from Tenafly High School and was a childhood friend of Mira Sorvino, with whom she wrote and acted in backyard plays.

Davis majored in cognitive science at Vassar College, but then made her debut as a dramatic actress in the 1990 film Flatliners, starring as William Baldwin’s fiancée. She then appeared in the hit film “Home Alone” in a small role as a Parisian airport receptionist. Later, she starred in independent films such as The Daytrippers (1995) and Next Stop Wonderland (1998). These led her to roles in Hollywood films such as the thriller Arlington Road (1999), and About Schmidt (2002).