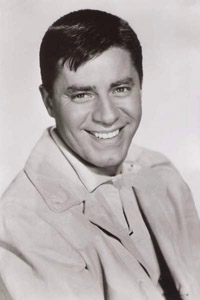 He was born Joseph Levitch in Newark to Russian Jewish parents. His father, Daniel Levitch, was a Master of Ceremonies and vaudeville entertainer who used the professional name Danny Lewis. His mother, Rachel (“Rae”) Levitch (née Brodsky), was a piano player for a radio station.

Lewis started performing at age five and would often perform alongside his parents in the Catskill Mountains in New York State. By fifteen he had developed his “Record Act,” in which he exaggeratedly mimed the lyrics to songs on a phonograph. He used the professional name Joey Lewis, but soon changed it to Jerry Lewis to avoid confusion with comedian Joe E. Lewis and heavyweight boxing champion Joe Louis. He graduated from Irvington High School in Irvington.

During World War II he was rejected for military service because of a heart murmur.

Lewis initially gained fame with singer Dean Martin, who served as straight man to Lewis’s zany antics in the Martin and Lewis comedy team. They distinguished themselves from the majority of comedy acts of the 1940s by relying on the interaction of the two comics instead of planned skits. In the late 1940s, they quickly rose to national prominence, first with their popular nightclub act, next as stars of their own radio program.

They then made appearances on early live television, debuting first on the June 20, 1948 debut broadcast of Toast of the Town with Ed Sullivan on the CBS TV Network (later the Ed Sullivan Show), followed on October 3, 1948 by an appearance on the NBC TV series Welcome Aboard, then as the first of a series of hosts of The Colgate Comedy Hour in 1950. They began their Paramount film careers in 1949 as ensemble players in My Friend Irma, based on the popular radio series of the same name.