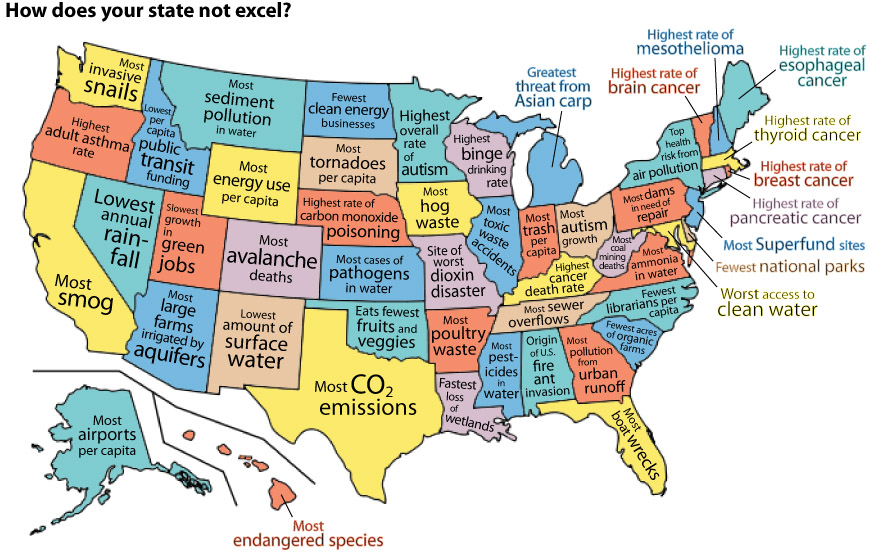 Well maybe we ignore them a little bit but we do a lot better job than other states.

Yes, we have had scandals in the News but so have other states. From governors to mayors to other officials in positions of authority, we have seen people abusing their positions for their own advantage. The fact that we have had so many scandals is proof that we are bringing them to justice. That adds to the proof that we are dealing with corruption and bringing people to justice. People are the same all over. There have been news stories of corruption all over the country from every state that you can name. The reason why we have more stories in the news is because we are exposing it.

New Jersey is nowhere near the most polluted state. In fact, in any comprehensive evaluation of the 50 states done with all environmental factors in mind, New Jersey always finishes in the top half and sometimes in the top 10 of the cleanest states. Yes, we do have some air quality issues in and around New York and Philadelphia but they don’t even crack the top 10 worst cities in the United States which is an accomplishment considering the volume of population and commuters involved. And there are plenty of states that have much worse land pollution than New Jersey and land pollution is what Superfund sites address.

So you’re asking how we can have the most Superfund sites if we are such a clean state. It’s because we are much more aggressive at finding, listing and cleaning up the sites. Just like with corruption, we are exposing more of our pollution because we are addressing it so that it can be fixed. The first step in solving any problem is admitting it and bringing it out in the open. Other states just sweep the problems under the rug and ignore them whether it’s corruption or pollution. That is no way to solve the problem, but it can help the residents feel better about themselves thinking that their state is cleaner or has less corruption than others. They are simply living in denial.

New Jersey is far from perfect but at least we are showing more effort to fix our problems than other states do.

Pin It
Previous post:
Are We the Least Corrupt State? The Center for Public Integrity Says Yes! Next Post:
Happy First Day of Spring!!!