The New Jersey Sea Grant Consortium held its tenth “State of the Shore” event on May 24th in Sandy Hook.  The Consortium, located in Sandy Hook’s Fort Hancock, is an affiliation of university and scientific groups dedicated to promoting the responsible use of New Jersey’s coastal and marine resources. The annual “State of the Shore” brings together scientists, engineers and government officials to speak about how the beaches and coastal waters of New Jersey fared over the winter and the forecast for this summer. 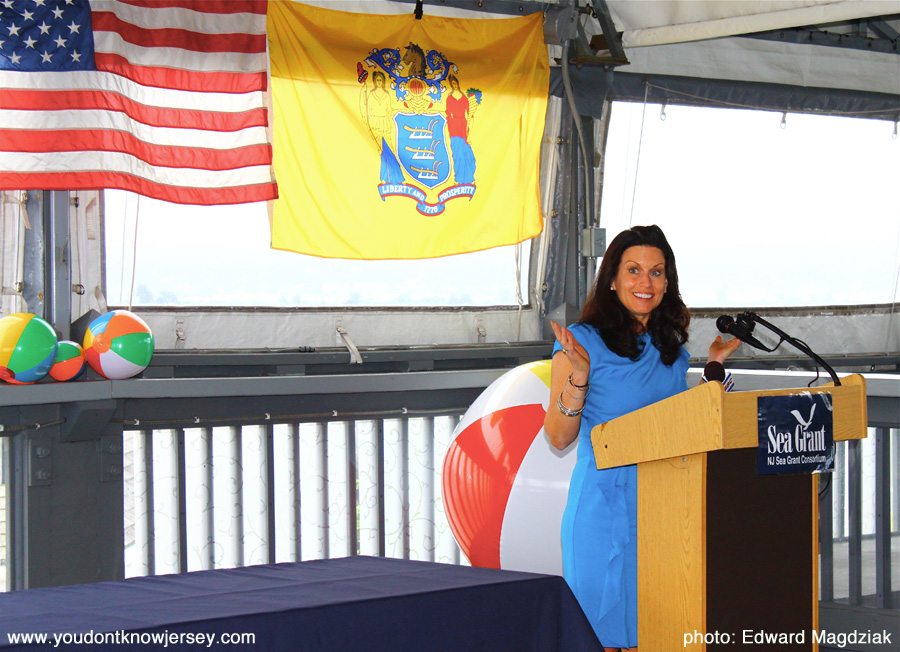 New Jersey’s coastline is approximately 130 miles long and the New Jersey Department of Environmental Protection (NJDEP) monitors 225 beaches all year round including aerial surveillance six days a week. A Rutgers study says our coastal waters are “healthier than we thought,” according to Bob Martin, NJDEP Commissioner. Further, a National Resources Defense Council study reported last year that NJ ocean waters are the second cleanest in the nation, after New Hampshire. However, Barnegat Bay remains a focus area because, Martin says, it’s been dying for fifty years.

Dr. Jon Miller, Coastal Processes Specialist for the NJ Sea Grant Extension Program and Professor at Stevens Institute of Technology, is so confident in the state of our shores that he related a story where as a kid his family would get to the beach and not be able to go in and now when he brings his kids to the beach, they no longer worry about whether they can go in. They know that the beaches will be clean and accessible. Dr. Miller reported that Hurricane Irene wasn’t as damaging as everyone had feared for the shore areas. Wave heights and storm surge were lower than other storms during the year.

We also heard from Grace Hanlon, Executive Director of New Jersey’s Division of Travel and Tourism.  She stated that our four coastal counties—Monmouth, Ocean, Atlantic and Cape May—bring in $18 billion in revenue each year for New Jersey. 2011 brought 80 million visitors to the shore, a jump of 14 percent over the previous year.  Hanlon expects to continue that trend into this summer.

All in all, the news about our oceans and beaches was overwhelmingly positive. New Jersey boasts a coastline that we can all be proud of.  So, get your umbrellas and beach chairs out of the garage and visit one of our clean, safe and fun beaches!

To hear more from the speakers at the State of the Shore event, check out the videos below.

This is Bob Martin, Commissioner of the New Jersey Department of Environmental Protection:

Next, was Dr. Tom Herrington, Associate Professor at Stevens Institute and Assistant Director of the Center for Maritime Systems at Stevens:

This was Michael Augustyniak, a supervisor of the Preparedness Squad from the New Jersey Office of Emergency Management:

And, finally, this was Grace Hanlon, Executive Director of the New Jersey Division of Travel and Tourism, speaking:

A presentation of New Jersey’s Top 10 Beaches for 2012 followed the State of the Shore event which we covered here.