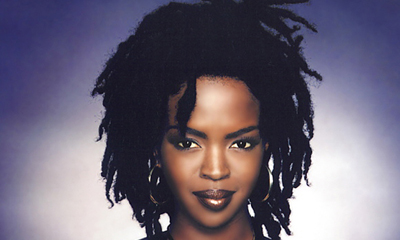 Lauryn Hill was born in South Orange the second of two children born to high school English teacher Valerie Hill and computer programmer Mal Hill. As a child, Hill listened to her parents’ Motown 1960s soul records. Music was a central part of the Hill home. Mal Hill sang at weddings, Valerie played the piano, and Lauryn’s older brother Malaney played the saxophone, guitar, drums, harmonica, and piano. In 1988, Hill appeared as an Amateur Night contestant on It’s Showtime at the Apollo. She sang her own version of Smokey Robinson’s song “Who’s Lovin’ You?” where she was booed tremendously but persevered and ended up with audience applause.

Hill was childhood friends with actor Zach Braff and both graduated from Maplewood’s Columbia High School in 1993, where Hill was an active student, cheerleader, and performer. Hill enrolled at Columbia University in 1993 and attended for nearly a full year before dropping out to pursue her entertainment career.

The Refugee Camp (“Fugees”) formed after Prakazrel “Pras” Michel approached Hill in high school about joining a music group he was creating. Soon after, she met Michel’s cousin and fellow Haïtian, Wyclef Jean. At some point, Hill was nicknamed “L Boogie,” as she began to convert her poetic writing into rap verses. Hill’s singing gained worldwide acclaim with the Fugees’ remake of “Killing Me Softly with His Song,” accompanied by a sample from Rotary Connection’s “Memory Band.” The Fugees’ first album, Blunted on Reality, peaked at No. 49 on the U.S. Hot 100. The album sold over two million copies worldwide. Blunted on Reality was followed by The Score, a multi-platinum, Grammy-winning album that established two of the three Fugees as international rap stars. Singles from The Score include “Ready or Not,” “Fu-Gee-La,” “No Woman, No Cry” and “Killing Me Softly.”

Hill began her acting career at a young age, appearing on the soap opera As The World Turns as Kira Johnson. In 1993, she co-starred in Sister Act 2: Back in the Habit as Rita Louise Watson, in which she performed the songs “His Eye Is on the Sparrow” (a duet with Tanya Blount) and “Joyful, Joyful.” It was in this role that she first came to national prominence, with Roger Ebert calling her “the girl with the big joyful voice.”

The rest is Hollywood and music history.

Pin It
Previous post:
Ocean City – One Day Before the Unofficial Start of Summer – Photo Essay Next Post:
Good News, Wildwoods Beaches Are Now Unlocked and Open For Business!