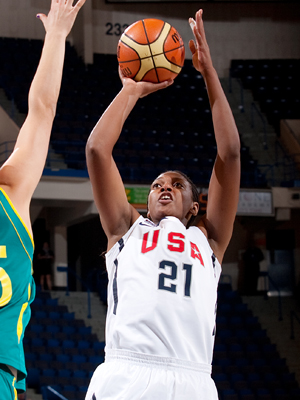 At the age of three, Jones began playing basketball in a Piscataway park. By the age of twelve, she reached her adult height, so she was taller than most of her teammates, boys and girls. Her shoe matched her age for a time, until she peaked out at size 13. She started going to basketball camps at an early age, including one at Rutgers while she was in fifth grade. When she was in eighth grade, she was good enough to win the MVP of her summer league, despite playing with high school age participants.

Jones attended Piscataway Township High School and holds the school record of points and rebounds with 2,266 and 1,256 respectively. As a senior, Jones played on the high school team that went to the state finals. In high school, she was a McDonalds All-American and The Star-Ledger New Jersey Girls Basketball Player of the Year, earning her a scholarship to the University of Connecticut. Jones was named a WBCA All-American. She participated in the WBCA High School All-America Game, where she scored seven points.

Jones came to the attention of a local AAU coach, Rich Leary, when she was a freshman in high school. At the time, there was an AAU team for boys, but not one for girls. So initially, she played with the boys. Leary formed a girls team, the Demons, with Jones as the centerpiece. By the time she was a junior, the Demons won the under-18 state tournament and advanced as far as the national AAU finals. The following year, Jones averaged 30 points a game and lead the team to the national tournament again.

In her four-year (1999-2002) collegiate career Jones, who played for Auriemma at the University of Connecticut, aided the Huskies to a 136-9 record (.938), won a pair of NCAA crowns (2000, 2002) while advancing to four NCAA Tournaments, including the 2001 Final Four, and earned four Big East regular season and tournament titles.

We can watch Asjha and the rest of the U.S. Women’s Basketball team beginning July 28th with the gold medal game on August 11th.