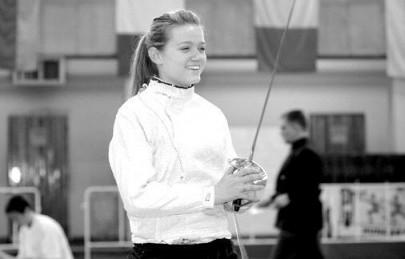 Dagmara Wozniak was born in Wrocław, Poland in 1988 and immigrated with her parents when she was one year old. She’s representing the United States and her adopted country as a sabre fencer. Dagmara was named to the U.S. Olympic team at the 2008 Summer Olympics in women’s sabre competition as a substitute so this isn’t her first attempt at a medal.

Last year she helped the USA team win a bronze medal at the 2011 World Fencing Championships.

We can watch her on NBC starting August 1st with the medal rounds that evening.

Some bio data via Wikipedia.org.