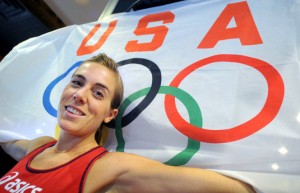 photo courtesy of Sue Beyer of The Express-Times

Julie Culley, a resident of Clinton, won the Olympic Trials for 5000 meters by running a personal best time of 15 minutes, 13.77 seconds. She trains in Clinton and at her alma mater, Rutgers University.

After her successful college running career at Rutgers, Julie quit competing and became a coach at Loyola University in Maryland.  But, finding that she wasn’t happy being on the sidelines, she went back to competing and trained for the 2008 Olympics.  After finishing seventh in the 2008 Olympic Trials, she upped her training which apparently was just the thing she needed to become the winner of the 2012 Trials 5000 meters.

Culley holds a school record in the outdoor 5,000m at Rutgers. She was also an NCAA qualifier in cross country while at Rutgers. In 2004, she was the recipient of the New Jersey’s NCAA Woman of the Year Award, given to female student-athletes who have excelled in academics, athletics and community service.

Watch her compete in the qualifying rounds beginning August 7th and (hopefully) the finals on August 10th!

ASICS Athlete Julie Culley is Bound for London With Her First Place Finish in the 5000 Meters – marketwatch.com