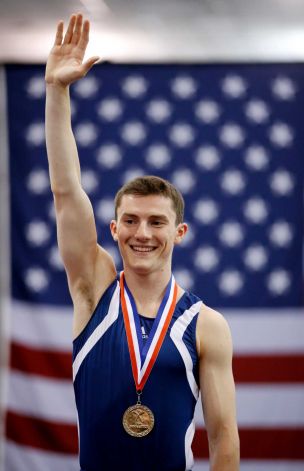 Steven Gluckstein is from Atlantic Highlands. He began his athletic career practicing Taekwando until the school’s closure forced him out of martial arts. Gluckstein’s mother subsequently signed him up for gymnastics with coach Tatiana Kovaleva to keep him involved in sports. He competed at national level in his first year of trampoline in 2001, finishing sixth overall.  He just missed competing in the 2008 Summer Olympics so he must be thrilled to have made it this year!

His younger brother, Jeffrey, also competes in the trampoline and got third place at the Olympic Trials this year.

Rhythmic gymnastics start August 9th and will have the medal competitions on the 11th for individuals and the 12th for the team competition.  Good luck, Steven!

D’Alessandro: Olympic spot in trampoline up for grabs as NJ’s Gluckstein brothers must battle each other – nj.com