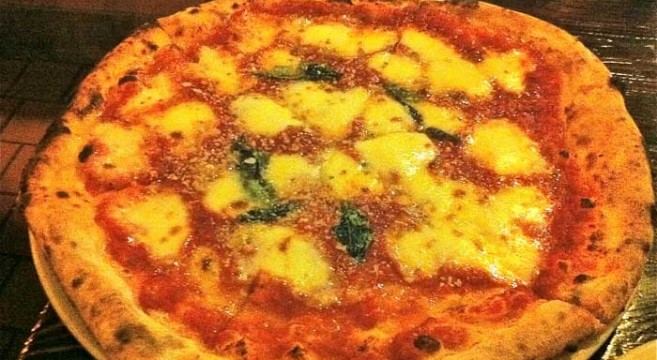 It’s National Pizza Month and we’re traveling around New Jersey to try different kinds of pies.  Today, we’re talking about Ah’ Pizz in Montclair.  It’s not your normal pizza joint, this is a real “pizza restaurant.”  They’ve also got great looking Italian entrees but since we’re talking pizza this month, we stuck to the pies on the menu.

The pizza here is amazing!  We tried a Margherita pizza first.

Crushed tomatoes, mozzarella, basil, and Parmigiano-Reggiano.  Simply amazing.  Light, crispy crust and an equally light hand on the tomatoes.  The perfect background to the most amazing mozzarella we’ve ever tried.  If I could eat this pie every day, I would.  It’s THAT good.

The pizzas take about 90 seconds in the restaurant’s centerpiece oven.  According to their website the oven was made by Neapolitan artisans using stone and volcanic soil from Mount Vesuvius. It was built to cook at a temperature of 1,000 degrees with only wood as fuel. It’s beautiful on the outside and beautiful pizzas come out of the inside. 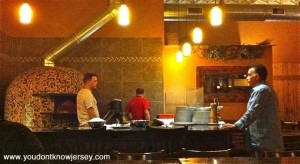 They are so proud of their ingredients they go into details on the front page of their site.  San Marzano tomatoes, Pure flour from Napoli, Sicilian Sea Salt, Fresh Fiore Di Latte (fresh mozzarella), Extra virgin olive oil (imported from Napoli), Fresh basil, Mozzarella Di Bufala (imported from Napoli fresh every week).  Honestly, I’ve never been a big snob about my pizza.  But, this is really something amazing and worth going out for.

In fact, they ARE actually a rare treat for the United States. Ah’ Pizz is one of only 60 pizzerias in the United States that is VPN-certified! VPN Americas is the local branch of the Associazione Verace Pizza Napoletana, an international non-profit organization founded in the mid 1990’s by a group of Neapolitan pizzaiolis (pizza makers) seeking to cultivate the culinary art of making Neapolitan pizza. Pretty cool!

The second pizza we tried was a daily special.  And it really was special. 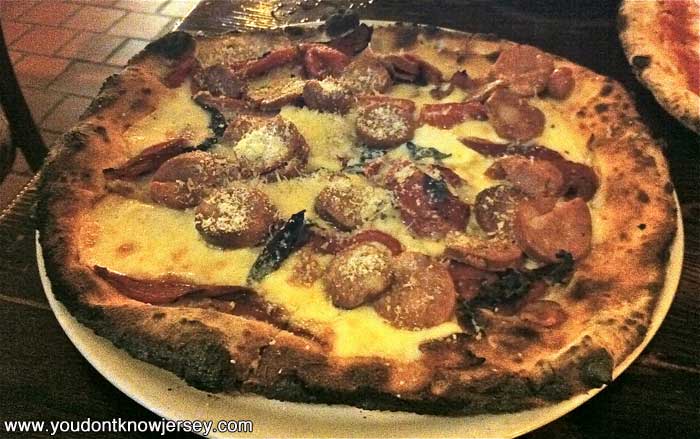 They took a humble sausage pizza and ran with it.  First of all, the sausage was a very lightly spiced chorizo.  Nice thick slices and plenty of them.  Next up was roasted red peppers.  Normally, these would be an afterthought.  Not here.  Flavorful and rich, these peppers were the best I’ve ever had on a pizza.  BUT…  the hero/miracle/coup d’état (yes, all those things) of this pizza were the eggs.  Our waiter said that the eggs are first roasted in the oven and then finished on the pizza while it’s in the oven.  The roasting session leaves the egg white fully cooked but still kind of creamy and tender. The yolks though are just ever so slightly cooked but mostly runny and savory.  I’ve never had eggs like this before, let alone on a pizza.  If I could figure out how to do this at home, I might not ever leave the house. It was seriously almost a religious moment when I got to the egg on my first piece.

If you’re in the market for a really nice night out in Montclair but want to celebrate National Pizza Month, you NEED to check out Ah’Pizz!  It’s a beautiful restaurant and the open kitchen makes a really fun show while you’re waiting for your orders. 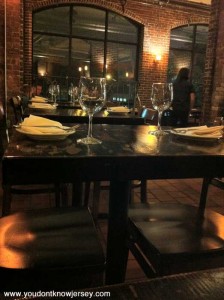 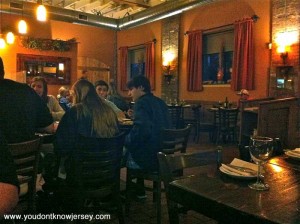 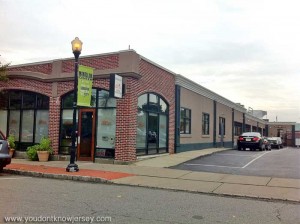 Check out our other food articles by clicking here.