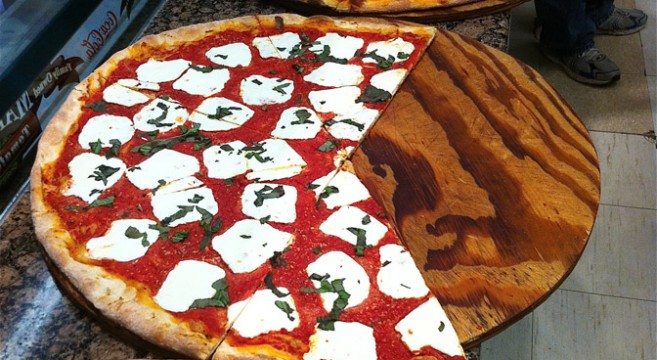 October is National Pizza Month So We Headed to Seaside 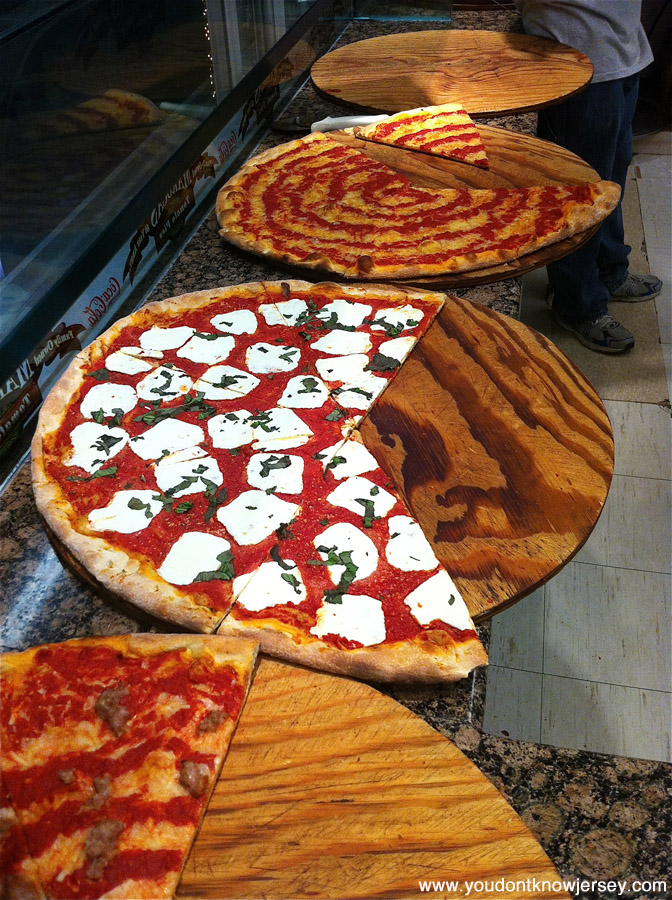 October is National Pizza Month. The people of New Jersey love to argue with each other but one thing they can agree on is their love of pizza. Here in New Jersey we are blessed in this department. One can hardly drive a mile without coming across a pizza parlor. Everyone’s favorite lunch day growing up was Friday. Why? Pizza. Details are not written in stone but estimates are National Pizza Month was first observed in the United States in 1984, though not by Congress until 1987. According to the website Pizza.com there are an estimated 63,000 pizzerias in the US and 94% of Americans eat pizza at least once a month.

In order to kick off National Pizza Month properly, we decided to head down to Seaside and settle something that had been rattling around our files for awhile.  Everybody was shocked to hear that we’d never tried the Sawmill’s giant pizzas in Seaside Park, especially given that we had started this little website about cool things in New Jersey.  We also wanted to try Maruca’s Tomato Pies which is just up the boardwalk from the Sawmill.  Maruca’s has some big pizzas, too, but their real claim to fame is the pinwheel pattern of cheese and sauce.  So, we made it a little contest.  The two famous pizza places on the boardwalk – head to head.

We got to Maruca’s first and ordered two regular slices and one sausage slice.  The pinwheel design of the pies is striking but does it do anything for the taste or is it just a gimmick? 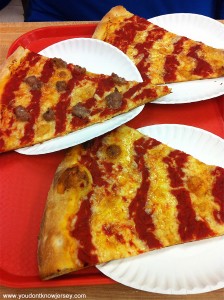 The first thing that hits you when you first bite into the Maruca’s slice is that the crust is kind of buttery.  Not in a bad way, either.  It’s almost like they have some Pilsbury Crescent Rolls mixed into the dough.  The crust is very light and kind of flaky.  It’s amazing. Not so crispy that it breaks apart in your hands and not so doughy that you have to work to bite through it.  It’s thin and crusty and totally different.

Then your mouth registers the sauce. It’s fresh and light and slightly sweet.  I needed to add a little bit of oregano to make it perfect.  Not everyone will need this but it’s readily available on every table.  There’s also chili flakes and parmesan around if you need a little something extra.

The only real miss for us was the sausage. I can’t remember ever having a piece of sausage that was so bland. It could have used some kick. It was a real shame since the plain slices were so ultra-delicious.  I ended up picking the rest of the sausage off and adding more oregano. 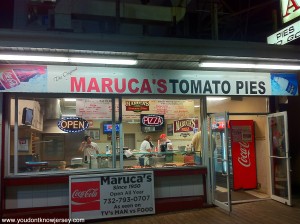 We will definitely be having more Maruca’s Tomato Pies.  Just not with sausage.

Finally, it was time to walk down the boardwalk a few hundred feet to try Sawmill pizza.  For some reason, this summer lots of people had mentioned the Sawmill as a “must go” place on the Seaside boardwalk.  How was it possible that we completely missed this?  Maybe it’s Ed’s love of JR’s sausage sandwiches that kept us from straying too far down the boardwalk to try other delights.

Well, it was finally time to rectify that situation. 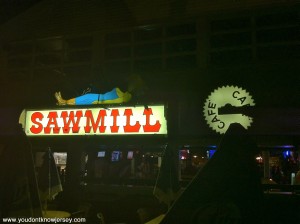 The Sawmill is certainly hard to miss as you’re making your way down the boardwalk.  You can’t walk straight down the boards, you have to walk all the way around the large bar and restaurant that makes up the Sawmill.  On this early fall evening, it was kind of a sad sight.  Just a few people milling around and none of them looked like they were having a very good time.

We ordered two plain slices (because it didn’t look like anything else was available) and waited for them to warm up as we heard another customer ask for her slice to be cooked more.  Turns out, we probably should have ordered the same had we known. 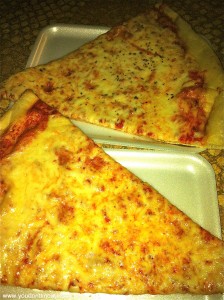 It wasn’t terrible pizza.  The crust was pretty spongy but tasted good.  Unfortunately, the cheese was plentiful and very lightly cooked.  This is not what we really like in our pies.  I’d prefer a place use a better cheese sparingly rather than use cheap cheese and pile it on.  The cheese was such a gooey, drippy mess that it made the slices pretty un-enjoyable.  The sauce wasn’t the star here, either.  In fact, I don’t even remember tasting any sauce.  After hearing such rave reviews about the Sawmill, we were sadly disappointed.

Maybe they were having a bad night?  Or maybe we need to go in the summer when they have more turnover?  We might give it another chance next year but we’re not exactly rushing back.

Yes, the pizzas were huge and, yes, one slice would definitely fill you up in a little foray from the beach on a hot summer day.  So, if you have an undiscerning crowd (like lots of little kids or something), then maybe the Sawmill is your place.  I could see kids being impressed by the giant pizza and less interested in browned cheese and fresh tasty sauce.

Since October is National Pizza Month, we need to hear from you about where else we should go this month!

And, maybe you Sawmill fans should tell us what we missed.

Pin It
Previous post:
Greetings from Zombie Park – The Undead Will Gather for the 5th Annual New Jersey Zombie Walk in Asbury Park Next Post:
Things to do in Jersey – October 5 6 7 2012