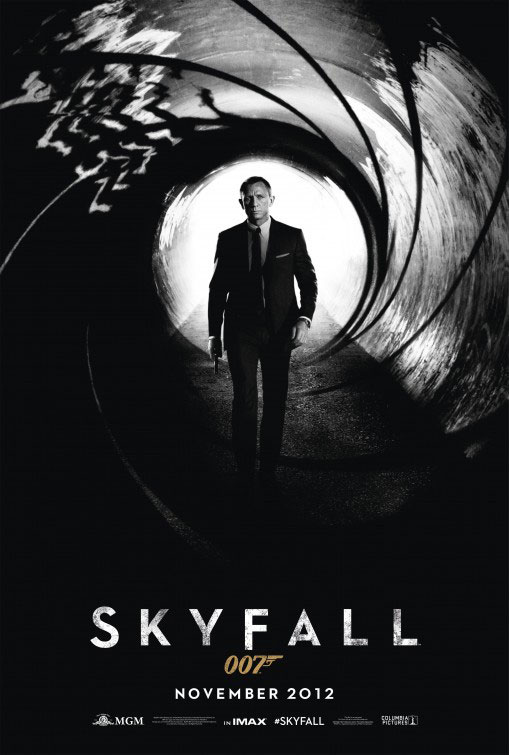 Skyfall is the 23rd film in the James Bond franchise or the 24th if you count Sean Connery’s renegade movie, ‘Never Say Never Again’.  It’s been 4 years since ‘Quantum Of Solace’, the last Bond movie and Daniel Craig’s second outing. The legal issues involving MGM’s bankruptcy had the status of if or when there wold be another film up in the air. Now that they are back in the business, they seem to have a renewed sense of purpose.

This movie sets the groundwork for future films with a new beginning, while at the same time giving nods to its history. There is a distinct feeling that the series has been reloaded. It would have made more sense if they had done this in Daniel Craig’s first Bond film, ‘Casino Royale’ from 2006. The future of James Bond is once again bright and on solid footing, something that couldn’t be said since Pierce Brosnan finished his run with ‘Die Another Day’ from a decade ago.

The acting here is terrific. Judi Dench is back in her 7th appearance as M, and for anyone is still wondering if Daniel Craig has what it takes to fill Bond’s shoes, he absolutely does. He brings a gravity and tone that is perfect for the role. Ralph Fiennes has been brought in as a high level pencil pusher in the organization. Javier Bardem knows how to play a great villain as evidenced by “No Country For Old Men’, the movie which most people know him from. He turns in an excellent performance as an intelligent, psychotic, ruthless villain that has that really cool personality trait of being almost completely unfazed by setbacks or danger. However, his character at times comes across as cliched and soliloquies border on boring.

Story has never been a strong point and this movie is no exception. Some elements are contrived and others pointless and disposable designed as if they are simply there to fulfill obligations. The plot line of significance involves Bond, M, Q and the MI-6 organization. There is a conflict presented of the ‘old school’ methods vs. the ‘new school’ ones. M and Bond represent the old school while Q represents the new school of thought. The new Q, played by Ben Winshaw is very impressive. The conflict of philosophies is played out between him and Bond so he has to hold his own against him. Coming off of ‘Cloud Atlas’ this actor is really on a roll.

Since the Daniel Craig era started , there has been an extreme lack of gadgets. In fact, his first 2 movies don’t even have any gadgets or even a Q character in them at all. This broke tradition and wasn’t addressed in any way. Why they would all of a sudden close up the research and development on gadgets makes no sense but I guess the new writers simply hate them. I could understand this attitude if by getting rid of them, they could accomplish something new or different that they couldn’t before but instead we are losing something and gaining nothing. In this film they finally address it by re-introducing Q and having him give Bond a couple of paltry but useful gadgets and then saying that they are a thing of the past and they don’t really do things that way anymore. Since Q represents high tech and that is at the heart of his difference of opinion with Bond, he should be all about gadgets but instead he is against them. The writers have put words in the mouth of a character that would never say them.

Another Bond tradition missing from the new movies are jaw-dropping action sequences. They were a staple for many years but have not been that impressive in the last few films. Think Pierce Brosnan driving the tank through a city not large enough for it to fit through in ‘Golden-Eye’ or skydiving without a parachute into an out of control plummeting airplane in ‘Tomorrow Never Dies’. There is a decent one involving a motorcycle chase across rooftops in this film and ‘Casino Royale’ had an interesting catwalk fight scene, but the ‘how did they do that’ factor isn’t there the way it used to be.

Despite the changes, the series has been reset with a strong conviction and forward thrust. The box office success and buzz of ‘Skyfall’ mean the franchise is on solid, not shaky ground.

Click here to check out more of my Movie Reviews