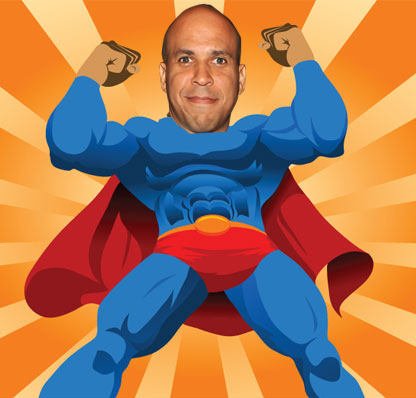 Newark mayor Cory Booker made his debut on The Daily Show With Jon Stewart Wednesday night, just under a week after Governor Chris Christie did the same. Looking sharp in his suit and purple tie he seemed in good spirits. Stewart bonded a bit with Booker over their New Jersey backgrounds telling Cory there has been a “tremendous amount of Jersey” lately.  Booker mentioned his growing up in Harrington Park after his family moved from Washington DC. Jon also called him the Superhero Mayor and lauded Booker for his deeds.

Stewart mentioned even more than other struggling New Jersey towns Camden and Paterson, Newark has faced dire challenges and has really fought its way back. Jon even joked and asked if that was why he’d have to get rid of the Nets to make it happen.

The oddest moment came when Booker mentioned he got in a Twitter fight about the SNAP program and Stewart asked “You’re on Twitter?” Really? Cory is very well know for his social media use, especially on Twitter. That Stewart did not know this seems very unlikely. If he didn’t, I would think his producers would have mentioned it. “Its the modern era Jon, c’mon” joked Booker.

Cory touched on his recent SNAP challenge, which we also attempted, calling it hard and difficult.

A fairly light interview that ended with Stewart saying he would crack Booker’s “veneer of optimism” when they returned.

You can check out the full interview on The Daily Show website.