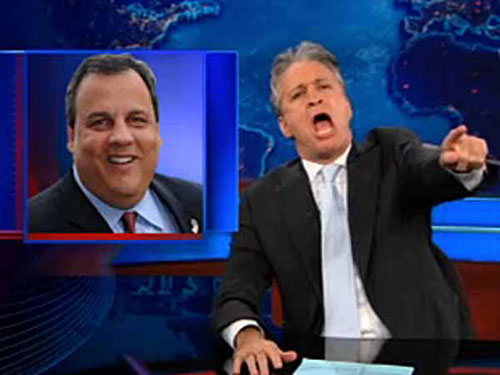 New Jersey Governor and native Chris Christie went on fellow New Jersey native Jon Stewart’s The Daily Show on Thursday night. The discussion began with Bruce Springsteen before getting to the relevant topic of the aftermath of Hurricane Sandy.

Christie showed his down to earth relaxed demeanor and good sense of humor even better than his appearance on Saturday Night Live a couple weeks ago. Unlike other politicians going on entertainment talk shows, there were no awkward silences that the host has to smooth out followed by polite patronizing applause by the audience. You also get the feeling that Christie is actually listening and having a real conversation during the interview which is rare with politicians. Many just tow the party line and simply recite pre-determined material when they get questions that they don’t want to answer.

When the conversation turned to politics, Stewart brought up the relationship of cooperation and mutual admiration between Obama and Christie, comparing Christie’s comments about Obama days before he came to New Jersey to see the destruction that Sandy caused with his tone after their meeting. Christie did not back down on his previous criticisms of Obama and that makes sense. To pretend that he likes his policies would just be fake.

Jon Stewart is a Democrat but is open minded and interested in hearing what everyone has to say and actually consider it and have an honest conversation. He took Christie to task on the Republicans debate with Obama on healthcare especially in the shadow of New Jersey looking for money from the Federal Government for Hurricane Sandy relief. Christie correctly pointed out that aid for a crisis like Sandy or Katrina is not the same thing as determining legislative policy on how government should be run and how our money should be spent on long term projects that can and should be well thought out plans.

6 years ago, Stewart went on ‘Crossfire’, basically destroying it, ripping it to shreds by throwing a spotlight on everything that was wrong with both political parties and not only what a huge failure pseudo debate shows like ‘Crossfire’ were but how much damage they were doing to the public when they could actually be helping. He also condemned most political commentators and coined the term ‘Partisan Hackery’ which is basically having a debate with two puppets spouting hyperbole to promote their party no matter how ridiculous it is and not paying any attention to common sense, reality or what the other person is saying. It caused a huge stir at the time in 2006 and ‘Crossfire’ got cancelled a few months later. Within a year or two, it seemed to be all but forgotten considering that the atmosphere he was denouncing is now worse than ever. Check out this excellent video:

I’ve always liked Stewart a lot more when he is getting down to the nitty gritty and making real points about politics and news issues than when he makes superficial and silly but entertaining comments about the news or what politicians say or do. I really got the feeling that if Christie and Stewart could spend more time debating the subject matter they discussed tonight, you would get some true insight into some politically charged issues and maybe even some real solutions. The relatively short discussion was much more constructive than many of the debates you see on the big 3 or all-news networks. As neither a Republican or Democrat, I would love sit down with the two of them, attempt to lift the haze of ‘Partisan Hackery’ on either of their behalf’s and moderate the discussion with fact checking and a common sense breakdown of the real world implications of the policies discussed.

Then we could try to get a true understanding from both sides on what the reality of the situation truly is. It is what both politicians and the viewing audience desperately need but seem to get so little of.

Pin It
Previous post:
SNAP Challenge, Part IV – The One Where We Fail Next Post:
Christmas Lights – YDKJ Style