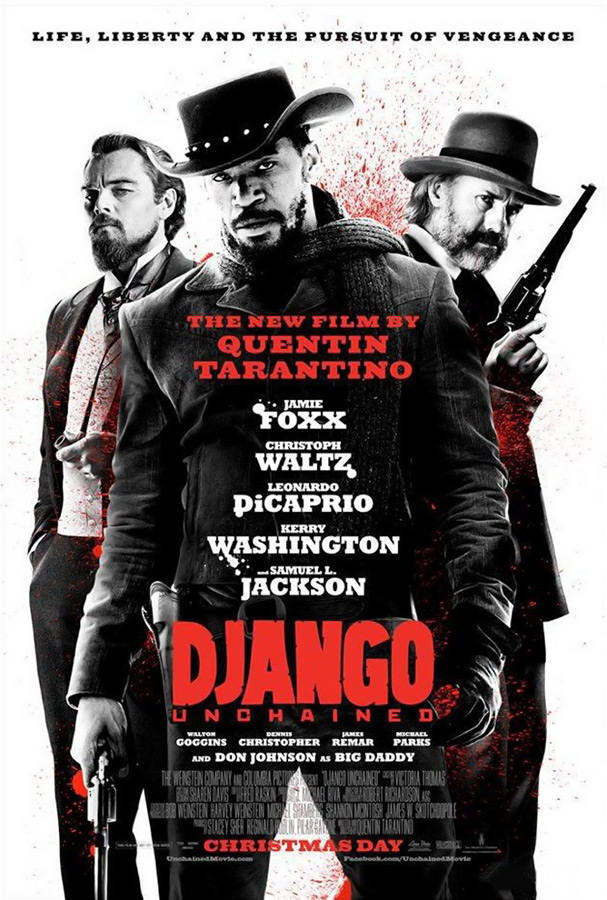 Django Unchained is a cross between a western and a buddy cop movie with an eccentric tone. Jamie Foxx stars as the lead character Django, a slave freed by a German bounty hunter (Christoph Waltz) to help him find some wanted men. They go into business together and then set out to locate and free Django’s wife from an evil slave owner (Leonardo Dicaprio).

Director Quentin Tarantino has mastered the art of film making with amazing camerawork, dialogue and storytelling. The energy and style are terrific and Christoph Waltz is excellent as usual, but this time as a good guy as opposed to the villain he played in ‘Inglourious Basterds’. Leonardo Dicaprio does the reverse here having fun playing a villain as he is usually in the role of the protagonist. Dicaprio is a perfect villain, intense and electrifying when the tension escalates.

Up until I saw this movie, I figured that Tommy Lee Jones had a near lock on the Best Supporting Actor Oscar but not any more. Samuel L. Jackson’s performance is unique and powerful without being over the top and he should and probably will win the award now. He plays a loyal slave and right hand man to Dicaprio and has turned on his own people. Jackson’s performance is menacing and haunting and is worth the price of admission alone.

This movie has a few very well done, stylized and extremely bloody action scenes. The violence is a mix of disturbing and cartoonishly funny. The film clocks 2 hours and 45 minutes which gives Taratino enough time to stage a suspense building scene reminiscent of the underground bar one from ‘Inglourious Basterds’. You know there is a payoff coming but you are not sure what is going to cause it and Tarantino plays with the audience knowing this is the case.

This is not Tarantino’s best movie as the story and pacing are not always satisfying, but it is still one of the best films of the year.

This is an amazing movie to look at with