MTV’s ‘Jersey Shore’ = Too Much of a Good Thing 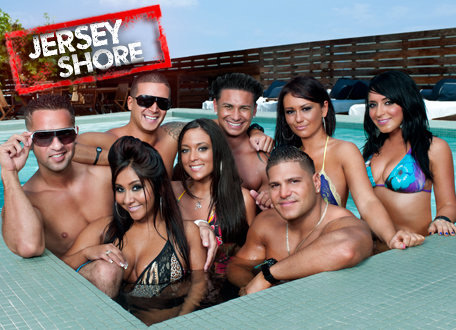 On Thursday, Jersey Shore completed its sixth season and is now officially over. Some people loved it. Some people hated it. I was thinking about it the other day and I realized that the show was simply too much of some otherwise good things.

Lets break the show down to its core elements :  Their signature GTL = Gym, Tanning, Laundry + Sex, Drinking and Makeup and Hair.

The Gym : There is obviously nothing wrong with going to the gym. Working out gives you energy, reduces stress, makes you look better and live longer so what could be wrong with that? Besides looking like a muscle bound oaf that can barely move their arms, studies show that exercising too much can lead to mood swings, fatigue, elevated heart rate, insomnia, fat gain and weakened immune system. This could definitely have contributed the the mood swings of some of the characters on the show. On top of that, it doesn’t leave much time for other interests and hobbies. It leads to having less character and being a less balanced and well rounded person.

Tanning : Getting some color in your skin from the sun looks healthy and cool… unless you tan so much that you look bright orange like the Jersey Shore cast or that crazy woman in New Jersey that got banned from tanning salons for making tanning look horrifyying. They just don’t know when to stop. A tan looks better than being pale but not when you go too far.

Laundry : I don’t know what to say about this. There is nothing wrong with clean clothes. I have no idea if they were washing them too much. Although that can cause the clothes to lose color and start fraying and wearing out faster.

Sex : Everyone likes sex so what could be the problem? How about when it is a one night stand with someone that you don’t care about and will probably never see again. On top of that, at least one if not both of the people participating are wasted and in a drunken stupor. And many times the target is disposed of after the act like a piece of garbage. Plus what were cast members thinking starting actual relationships when they had to know that they would wind up cheating?

Drinking :  A little alcohol can be a good thing to take the edge off and give you a buzz. But how many people stop there? Certainly about half of the cast members don’t know when to say when. They just get totally plastered and make an ridiculously embarrassing spectacles of themselves.

Makeup and hair : When going out to a club, nice restaurant or social event, many people put on some makeup and do their hair so that it looks nice. It can enhance features and give a polished and refined look. On Jersey Shore, the industrial strength makeup and hair treatment, some of which were the likes I have never seen, are way overdone and resulted in many of them looking like cartoonish and borderline scary.

The point is that many of the staples of the show are things that done in moderation and in the right manner can be very good things. But doing too much of them can be very, very bad. The funniest thing would be if we learn years from now the entire show was scripted and fake and these were just actors playing characters nothing like themselves to make fun of the ridiculous behavior, satirizing it in a subversive way.