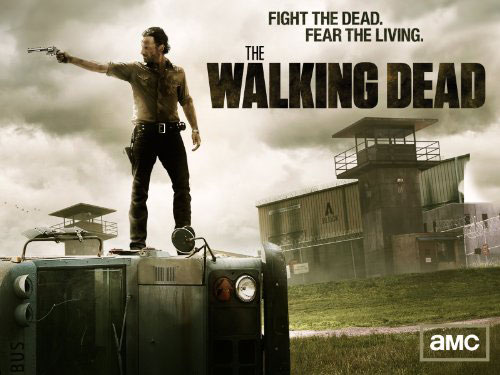 Say goodbye to the ‘Little House on the Prarie’ pace of last season, this season has sent The Walking Dead into overdrive.

The first season was excellent and got everyone hooked. During the second season, my interest began to fade and I began to realize I didn’t care much for any of the characters except for Daryl. The problem wasn’t the lack of Zombies, which is what most people complained about. It was the new characters and relationships not being that interesting and the existing characters losing their lustre. The second season was somewhat redeemed in the way it tied up its loose ends. It also had an action packed finale and set up the third season. However, the fact that there wasn’t a celebration at the news that Shane was dead was ridiculous. Even the characters that said Shane was dangerous were leery at Rick.

At the outset of the show, it was established that Rick was going to be the main character. One of the biggest problems of the second season is that the audience got away from him. They couldn’t relate to him anymore and that is a problem when he is the character that the viewer is supposed to experience the show through. He lost his hold on the audience. That all changed this season.

The backlash over him killing Shane turned him into a new Rick. Still not perfect, but angry and more of a character that doesn’t want to play games or take prisoners. Plus, he has experienced things this season that have the audience relating to him again. Other strong characters include Andrea. In the first season, she nearly committed suicide. She has come a long way since then. She was never really a dislikable character, but now she has become a great character. Bringing Michael Rooker’s Merle back ad making him a regular was a stroke of genius. He’s an edgy fun character and we finally find out what happened to him after being left on the rooftop. Although, he does seem a little too laid back this season. Michonne and The Governor are 2 more terrific additions to the show, for different reasons. And of course Daryl is my favorite character coming into this season and he never lets me down. Sometimes I wish he had more to do on the show, as he is still more of a supporting character. The deaths this season were inspired, shocking and fitting to the story.

The biggest accomplishment this season has been fulfilling the promise that the first season held. There was almost a year between seasons 1 and 2 and the first season left a good taste in your mouth of what was to come. The second season did not deliver, but this season delivered in spades. In fact I feel that so far, this season is better than the first. The story lines have been moving along at a healthy pace and the relationships between the characters have made the show everything it could be. The fact that the show has managed to incorporate so much action and so many zombies in to each episode while at the same time delivered the kind of writing, directing, acting and story that you expect from top level storytelling of any genre is simply amazing. Lets just hope that the show doesn’t burn itself out. It’s not easy to keep up this pace.

The Mid-Season Finale of the Third Season of the Walking Dead airs Sunday, December 2nd on AMC at 9:00 P.M.