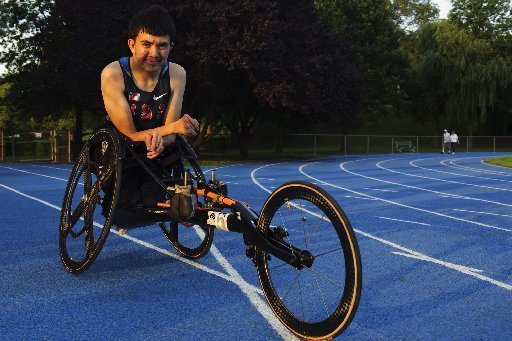 BP New York and New Jersey station owners have launched a fundraising campaign in support of four local Paralympic Sport Clubs by selling window clings for $1 at participating BP stations that began January 14th and will continue through February 28, 2013. The proceeds will help fund new equipment, participant outreach, training for coaches and competitive athlete scholarships, to further the Paralympic Sport Clubs’ mission of providing competitive and recreational sports opportunities for individuals with physical and visual disabilities.

All proceeds from the window clings being sold at participating BP stations will go to four local Paralympic Sport Clubs at the following locations:

We got a chance to ask Ray a few questions about his involvement with the BP Team USA fundraiser and his experiences in London.  Our Q&A follows.

What was it like traveling to and competing in London?

Being at the London Games was a breathtaking experience. From the village to the stadium I was just always happy and excited to be at the Games. This was actually my first Games and I won Gold in all four of my races. Being at the Games was just a humbling experience. Not every athlete that aspires to go to the Games can get there, and I remind myself every day that the London Games could easily be my last. I appreciated every minute I was in London and soaked in the entire elite athlete experience. I will never forget the 2012 London Paralympic Games.

Are you already planning for 2016’s Paralympics in Rio?

Rio is definitely on my list of goals to accomplish in the next few years. London was my first Games and it would be a shame to stop there. In the same capacity, a lot can change in sport in the span of four years. But as of now, I will continue my Paralympic career and shoot for the Games in Rio.

How is your first year of college going?

My first year at the University of Illinois is going surprisingly well. After missing two weeks of class because of London, I bounced back and achieved a 3.15 GPA for the semester. I just started my spring semester and I have a little more on my plate in terms of credit hours. Knowing I would struggle coming back from the Games, I opted to take only 13 credit hours. To stay on the four year plan (graduate in four years), I decided to take on a 17 credit work load this semester. I’m really excited to tackle my second semester and hope to do even better than the fall.

Can you elaborate on what made you interested in kinesiology and becoming an occupational therapist?

I’ve been an athlete my entire life. I started athletics when I was five-years old and I’ve stuck with it 14 years later. To some extent, the interest in kinesiology was embedded into me because of my athletic career. Recently I’ve been really interested in the science behind sport such as the biomechanics of the human body. On top of that, I can use the knowledge I will learn about biomechanics and bioenergetics to further improve my athletic ability. I decided I wanted to become an occupation therapist because I knew I wanted to give back to those who are injured or who have a disability.

What’s your favorite thing about New Jersey and is there anything you miss now that you’ve been living in Illinois?

My favorite thing about New Jersey is the whole environment. I was born and raised in Jersey City which is rich in ethnic diversity and has a real “city” feel to it. One thing I genuinely miss after being out here is the quality food there is in Jersey. I never realized how spoiled I was with how good the pizza, bagels, and even bread is. Sure, there is Chicago deep dish pizza, but after growing up in Jersey, I will never fully enjoy the pizza here like I did in Jersey.

How did New Jersey help you become a world-class athlete?

The North Jersey Navigators allowed me the opportunity to train regularly and ultimately provided me with the guidance I needed to help me succeed at the London 2012 Paralympic Games. I trained at their facilities to prepare for the Paralympics and really value all of the coaches and staff who helped me develop into the athlete and person I am today.

How did you get involved with BP and their fundraising campaign for NY/NJ Paralympic Sports Clubs?

BP is a partner of Team USA, which I’m a member of, and when they approached me with an opportunity to help give back to the Paralympic Sport Clubs that helped mold me into the athlete and person I am today, I was extremely excited to help out. BP stations in New York City, Long Island and northern and central New Jersey are selling $1 window clings from now until February 28. It’s a simple way to show your support for Paralympic Sport Clubs in the area.

How are you hoping to inspire future Paralympians?

I hope to give Paralympians the same opportunity that I had with the North Jersey Navigators. Paralympic Sport Clubs rely on limited resources to try and keep up with the growing number of participants. There are more than 21 million Americans with physical and visual disabilities and it’s important for them to know the opportunities they have with Paralympic Sport Clubs and so everyone understands the benefits they provide and why they should help BP donate to them. Additionally, if awareness for Paralympic athletes and the programs that support them increases so will interest for future Paralympic Games.

Ray is one reason we can be proud of New Jersey and the greatness that’s coming out of the Paralympics Sport Clubs.  So, make sure you stop in a nearby BP and get your window cling to support more athletes!