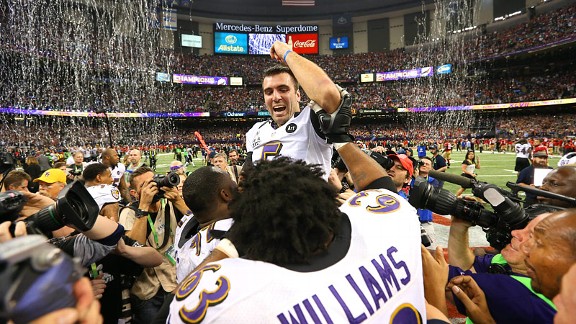 Audubon’s own Joe Flacco led the Baltimore Ravens to victory in Super Bowl XLVII over the San Francisco 49ers and picked up the MVP award as well. The quarterback had a big night in New Orleans going 22 for 33 and tossing 3 touchdowns. He did not throw an interception.

Can Flacco now be considered an elite quarterback? Is he in the same league as Brady, Brees and Rodgers? I’m not sure. One thing is true. He had an outstanding post season. Not every quarterback can go into Denver and New England and come away victorious against future certain Hall-of-Famers.

The victory could not have come at a better time for Flacco as his current contract is over. He hopes to stay with Baltimore but you never know.

These days no Super Bowl would be complete without a bit of a problem for the censors. No, no wardrobe malfunction or middle finger this year. But Mr. Flacco was caught on camera after the game saying the experience was “f*****g awesome” to teammate Marshal Yanda who first said to Flacco “Holy s**t, huh?” Someone must have been asleep at the wheel at CBS for that. Didn’t they just used to say “I’m going to Disney World!”

And of course the lights went out.