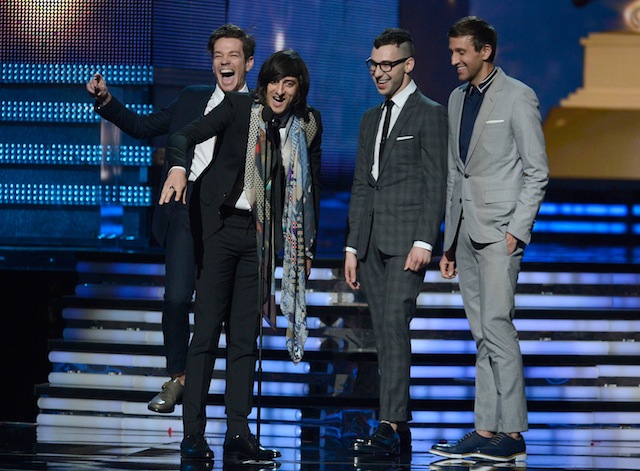 The band fun. won big at the Grammys last night.  They won Song of the Year for “We Are Young,” and also won the New Artist award.

What you may not know is that the band is one-third New Jerseyan.

Guitarist Jack Antonoff was born in Bergenfield and is the younger brother of fashion designer Rachel Antonoff. He grew up in New Milford and Woodcliff Lake and attended elementary school at the Solomon Schechter Day School of Bergen County. For high school, he and his sister commuted to New York City to attend the Professional Children’s School. During his sophomore year of high school, he and several friends from elementary school formed a punk rock band, Outline; the band was successful enough to tour in Florida and Texas. The band disbanded after several members left to attend college.

In 2002, Antonoff and his friend Scott Irby-Ranniar formed a new band, Steel Train, and secured a recording deal with Drive-Thru Records. Antonoff would be the new group’s lead singer. They soon recruited drummer Matthias Gruber and then convinced one of their friends from the band Random Task, Evan Winiker, to drop out of college to join the new band.

In 2008, Nate Ruess (formerly the frontman of The Format) asked Antonoff to join him and Andrew Dost (formerly of Anathallo) in a new band, which became fun. Antonoff was already well acquainted with Ruess and Dost because their former bands had all toured together.

Pin It
Previous post:
Seaside Heights – Recovery After Sandy Update Next Post:
Things to do in Jersey – February 15 16 17 2013