Welcome to our second article in a series we’re calling Take Me Out to the Ballgame! We’re visiting all of New Jersey’s ballparks this spring and telling you all about them. Two weeks ago, we told you about our visit to FirstEnergy Park to see the Lakewood BlueClaws.  This week we visited Arm & Hammer Park and the Trenton Thunder.  Yesterday we posted a sneak peek at all the pictures we took at the Trenton Thunder game and around the park. 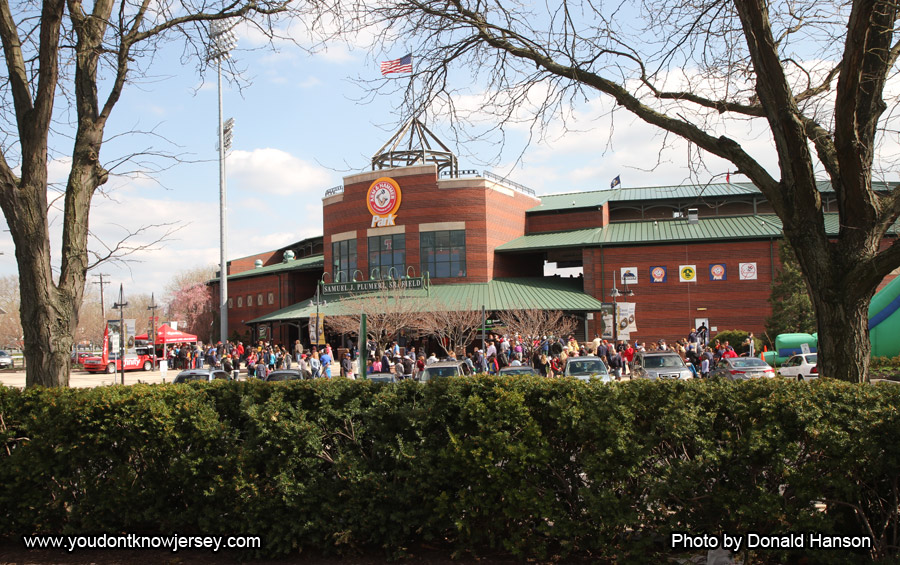 Arm & Hammer Park is located right on the Delaware River in downtown Trenton.  It’s a beautiful area of our state capital and nearby all the government buildings.  The Trenton Thunder are the Double A affiliates of the New York Yankees and they are in the Eastern League.  We saw the Thunder play the Richmond Flying Squirrels who are the San Francisco Giants Double A affiliates. 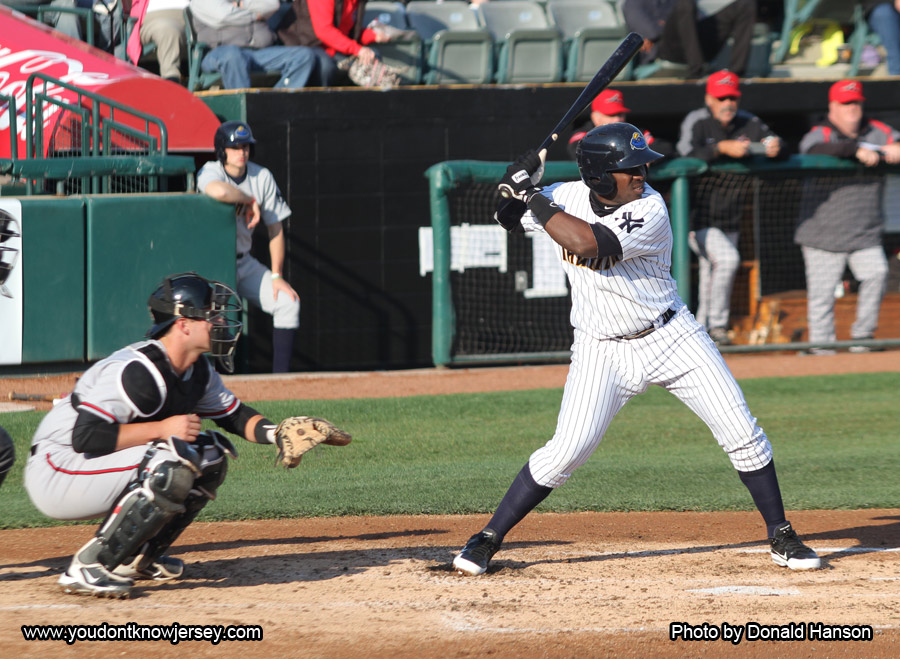 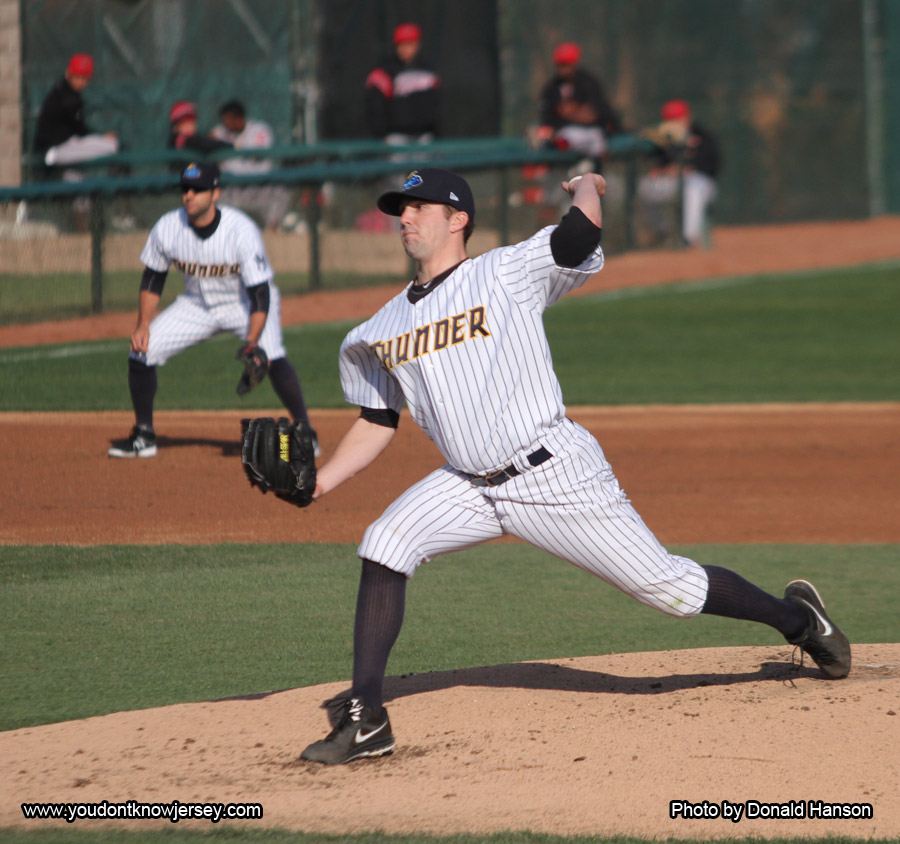 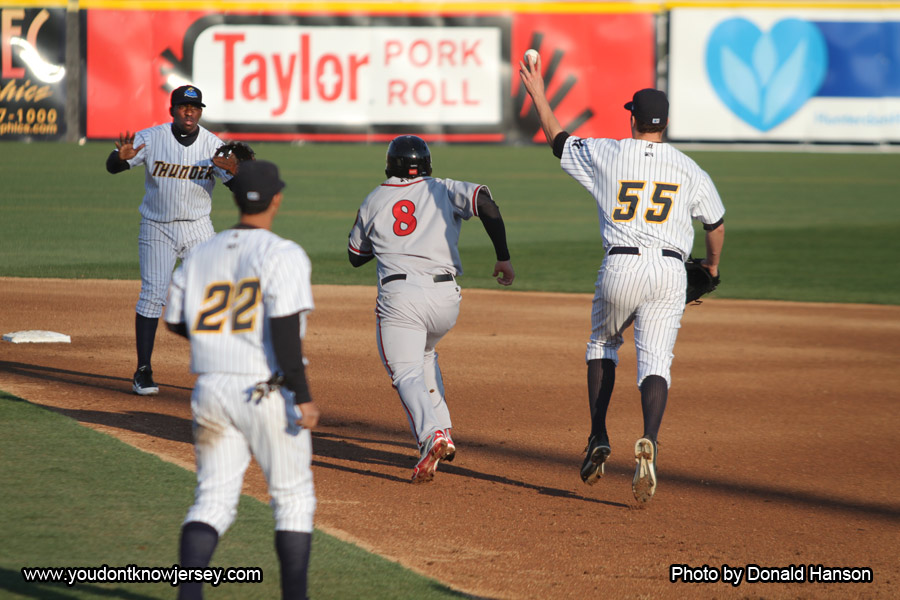 The park offers good viewing of the game from every seat in the house.  There are two tiers of ticketed seating along with picnic areas and luxury suites. Our seats were $12 each and we were about six rows away from the field.  That’s minor league baseball at its finest right there.  Plus, a bonus for a lot of New Jersey fans of the New York Yankees is that some of the players you’re seeing in Trenton could very well be future Bronx Bombers. In fact, the Thunder have a special deal with the Yankees to rehab all their injured players right in Trenton so there’s always a chance that you could even see a major leaguer coming back from injury and playing for the Thunder. 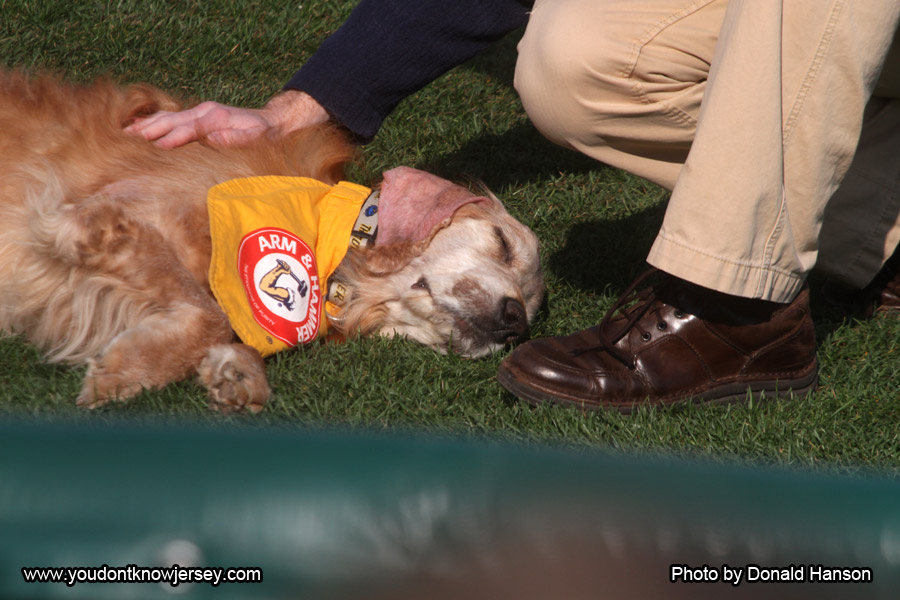 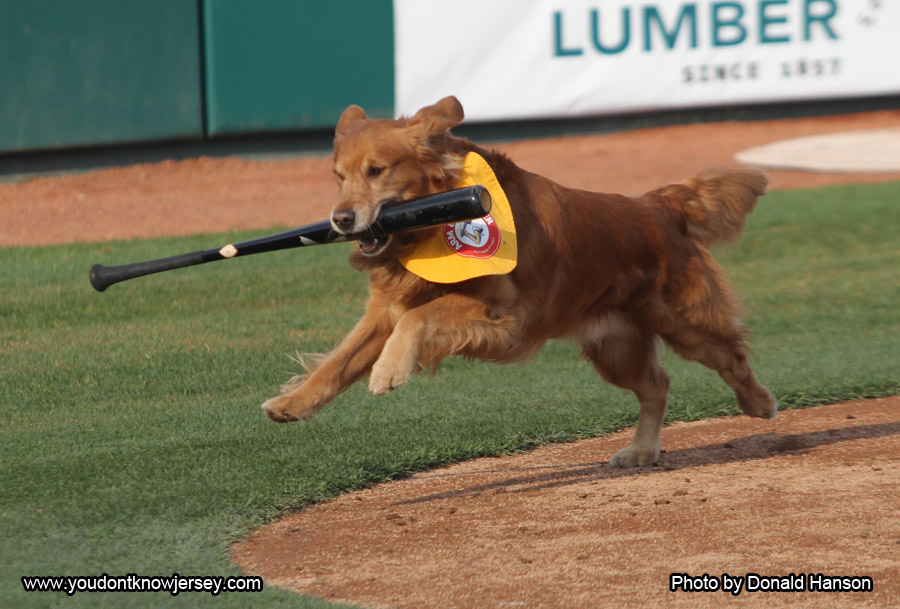 One of our favorite surprises at the Thunder game was the introduction of Chase and Derby, the ball and bat retrievers.  Chase (pictured above Derby here) seemed like he was in semi-retirement and spent most of the time on the field by getting pets from various Thunder staff members.  But Derby was anxious to get to work and we saw him snagging balls that were thrown out as the first pitch and retrieving bats from Thunder players who made it on base.  Chase and Derby are presented by Arm & Hammer Pet Care Products and are father and son.  They were awesome!

Along with Chase and Derby, there were mascots Boomer and Strike (the lightning bolt pictured second below). 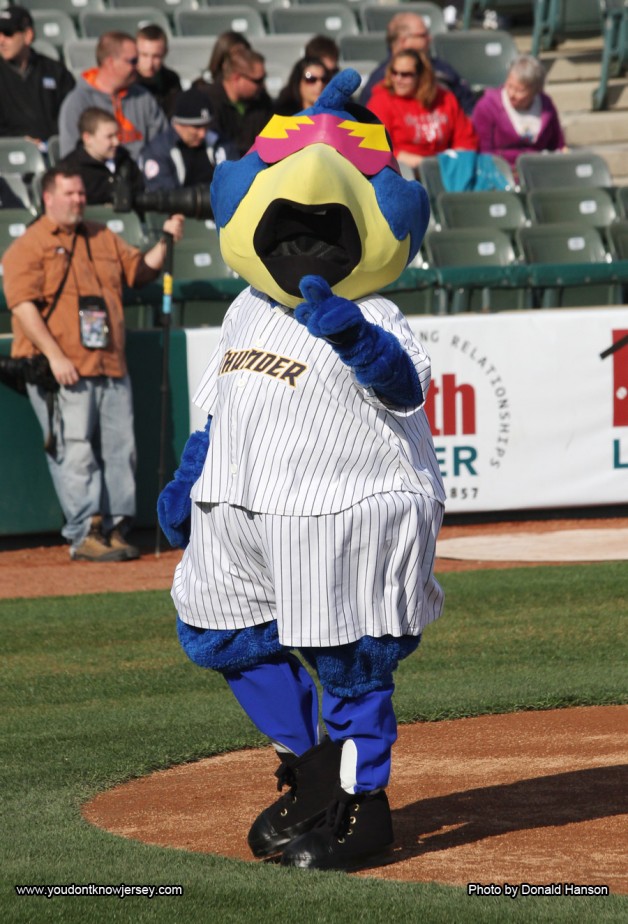 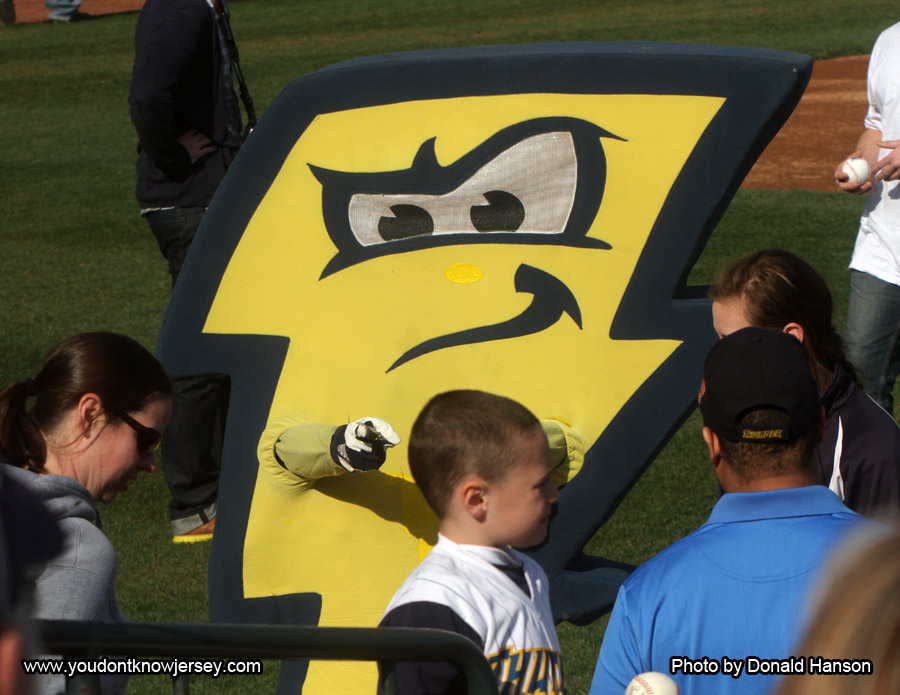 Boomer and Strike were involved with the crowd a lot.  They were especially busy in between innings when there were fun events that got the crowd involved.  Here’s a video of some of those events.

Along with the baseball food classics like hot dogs, cotton candy and Cracker Jack, there were lots of specialty food stands, too. 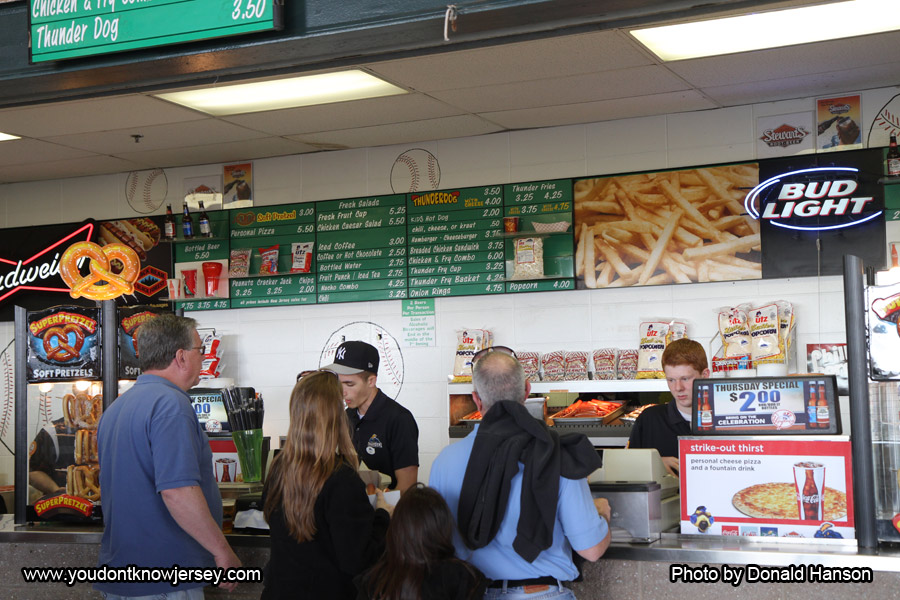 If you read our article about the Lakewood BlueClaws, you’ll remember that we mentioned the Horizon Healthy Plate concession sponsored by Horizon Blue Cross Blue Shield. The Trenton Thunder had the same concession and even had a ribbon-cutting ceremony for their Healthy Plate menu. 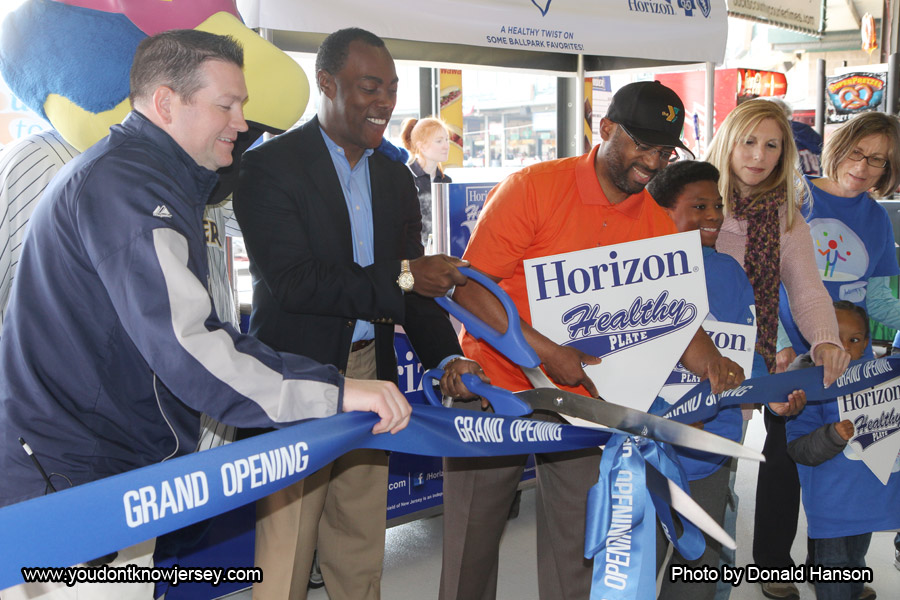 I just love this menu because they take the things that you expect at a game and make them a little healthier.  Plus, they add a few things in that you might not expect, too. 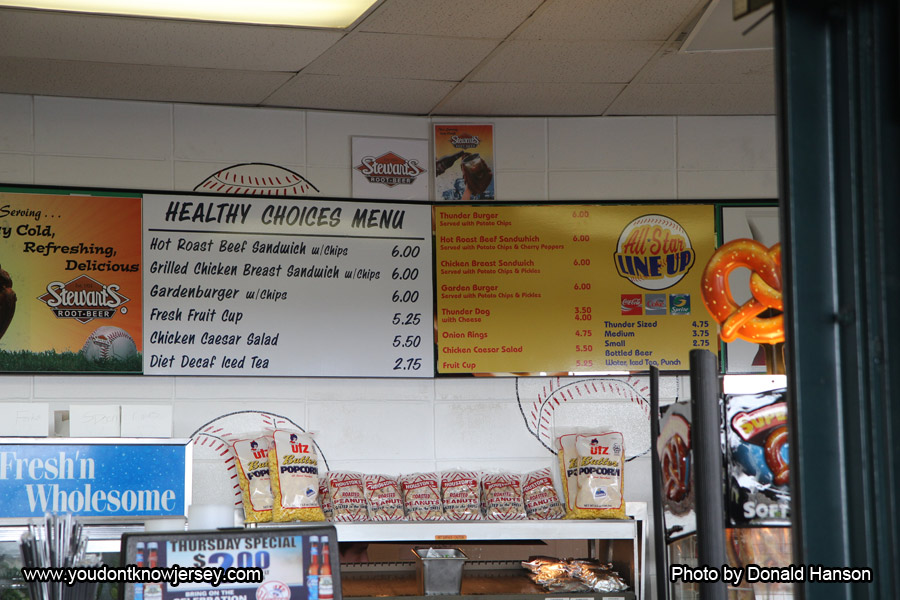 You can see the menu above has a roast beef sandwich, grilled chicken breast sandwich, Gardenburger along with fruit cup and a salad.   They also had a rolling cart which you can see behind the ribbon-cutters in the picture above which had a few more menu items.  Of course, we tried a few of these special menu items for you! 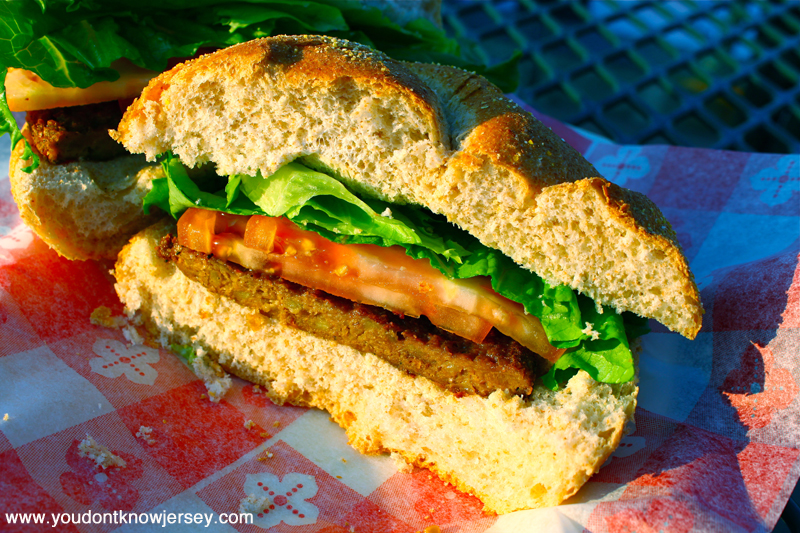 Here’s the Gardenburger on a whole wheat roll with lettuce and tomato.  It was very good but I wish either the roll had been smaller or the patty had been larger.  Luckily, the fresh veggies made up for the smaller Gardenburger in the few bites that didn’t include any burger. 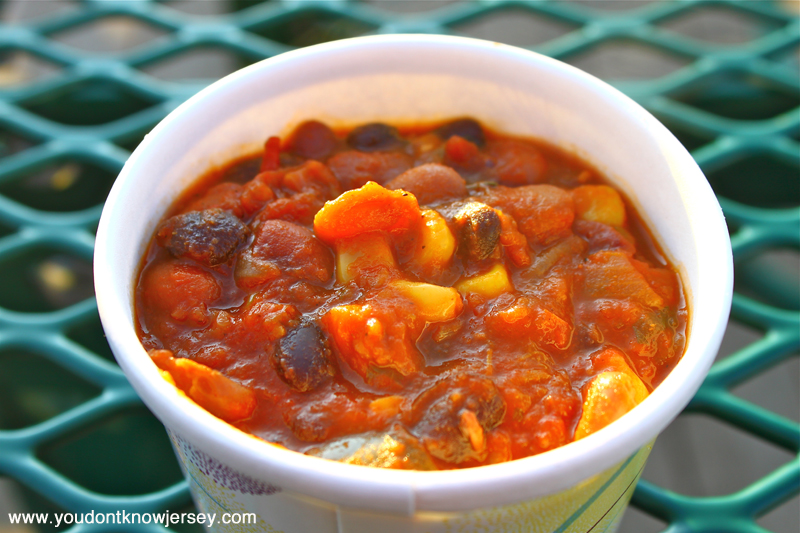 The star of the show on the Horizon Healthy Plate menu, though, was the veggie chili.  We didn’t miss the meat at all.  It was spicy and hearty with lots of beans to make it filling. The fresh corn added a nice sweet touch with the spiciness of the chili powder.  We’d come back to another game just for more chili! 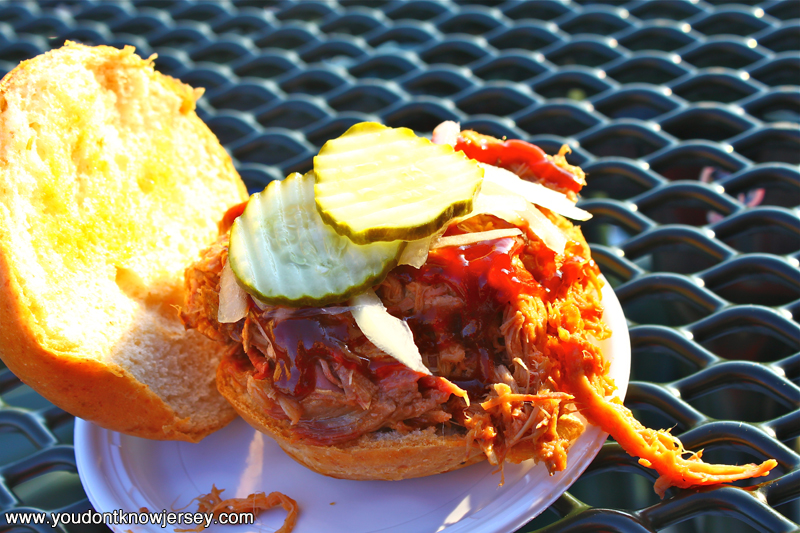 Another food highlight, this time away from the Healthy Plate menu, was the pulled pork sandwich from Boomer’s BBQ.  We’ve had a lot of pulled pork at a lot of BBQ places and this sandwich was no slouch.  The pork was tender and flavorful and you got a nice choice of additional toppings from a bar on the side of the cart with onions, pickles, peppers and extra sauce.  It all came on a nice brioche-type bun, too, which was a nice departure from the standard stadium bun. 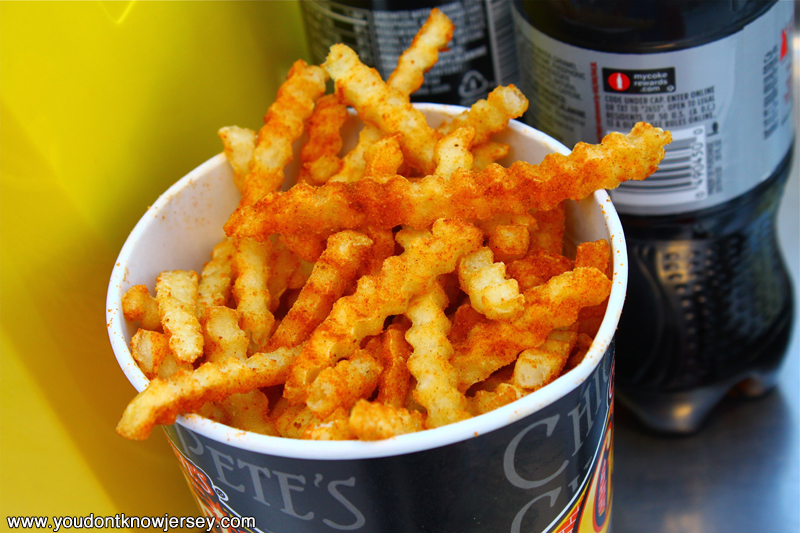 We also tried the crab fries from Chickie’s & Pete’s.  These things were seriously spiced!  The seasoning coated our fingers immediately and the fries stayed nice and crispy all the way down to the bottom of the cup.  It came with cheese dipping sauce which I thought was a really good creamy pairing against the grainy and spicy coating of the fries.  No wonder we saw so many people walking around with big cups of these fries! 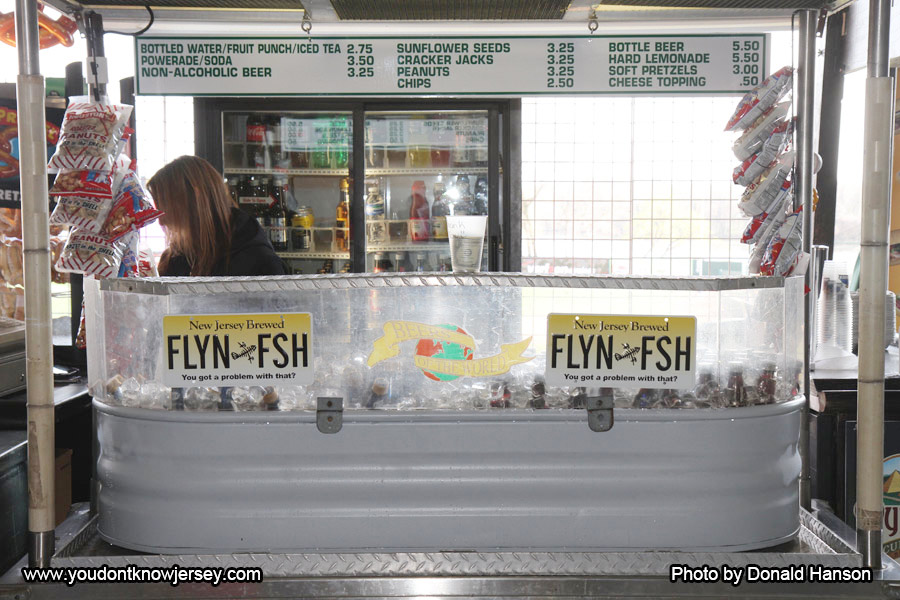 New Jersey’s own Flying Fish brewery had a cart of beers and snacks, too.  We love seeing NJ businesses represented at NJ events!

Another thing we love is minor league baseball and the Trenton Thunder was a great example of fun and exciting baseball action. All the ballparks in New Jersey are offering family fun at a great price.  The day we visited the Trenton Thunder, it was Kids Opening Day and there were lots of little leaguers that got to be on the field and run the bases.  The first 1,000 kids who entered got Andy Pettite replica jerseys and they had a showing of The Sandlot after the game.  During the game, actors from The Sandlot were signing autographs for  fans. 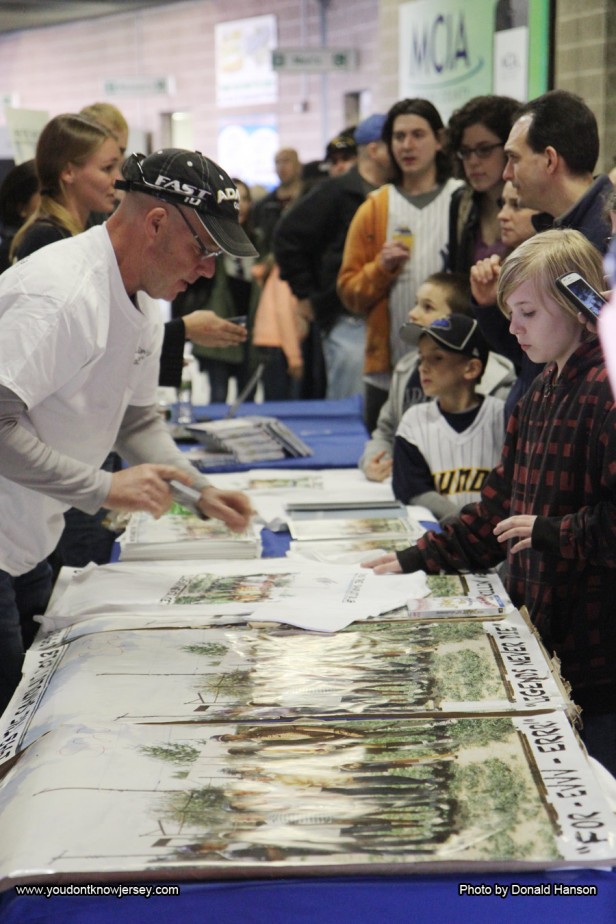 The Thunder really made a great day for these kids and their families and we’re sure that your family will enjoy a visit, too!