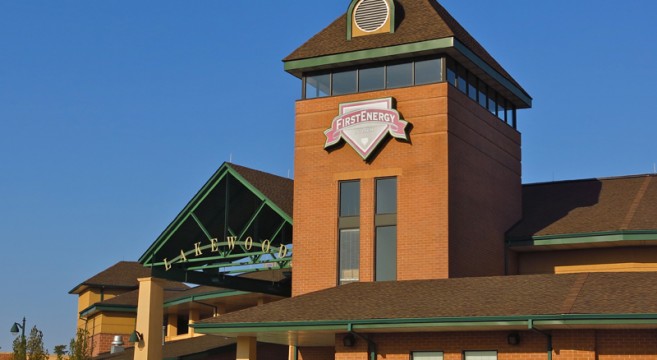 This is our first article in a series about visiting New Jersey’s ballparks.

On a chilly evening last Friday we headed over to FirstEnergy Field in Lakewood to catch the Lakewood BlueClaws play the Kannapolis Intimidators.  The BlueClaws are a Single A affiliate of the Philadelphia Phillies playing in the South Atlantic League. Kannapolis is a Chicago White Sox affiliate. 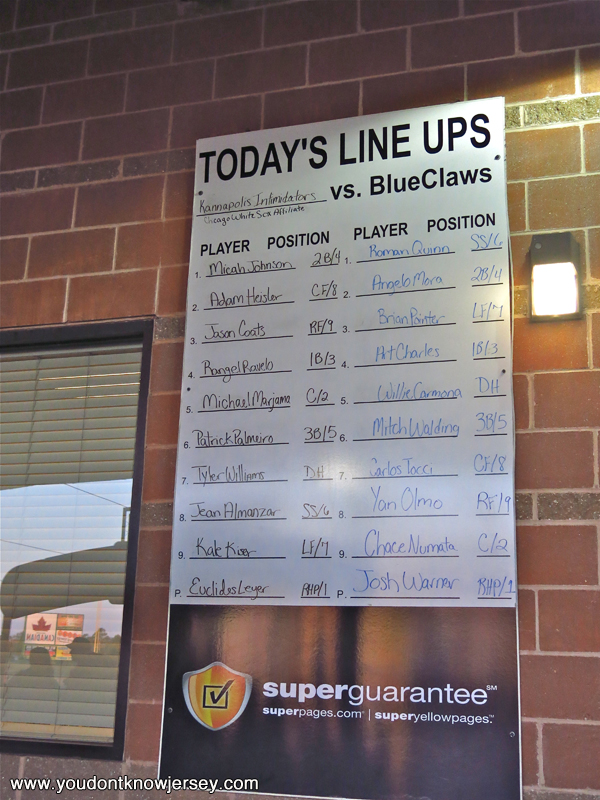 We were quite impressed with the stadium. There is not a bad seat in the house. In addition to the regular seats there were many general areas where you can sit at a table and have some food or spread a blanket and enjoy the game while relaxing. One thing we really liked was that you can walk around the whole stadium. Want to watch the game from deep center? No problem. There were even lifeguard chairs all around the outfield areas so you could be above it all and see the game from high above. 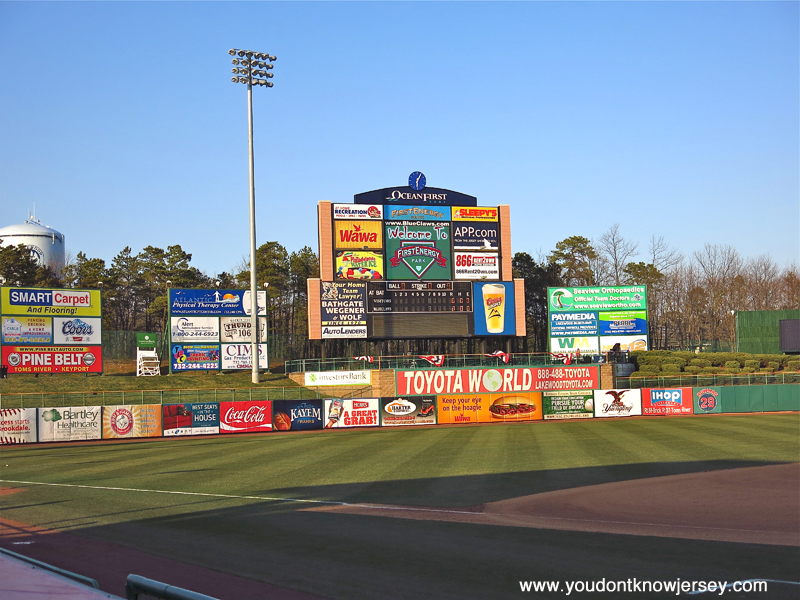 The BlueClaws are doing something really special this season. As we all know Hurricane Sandy had devastating effects on the Jersey coast. Given the ball club’s proximity to the shore, they are promoting the Restore the Shore program in an awesome way. The field has 2 large Restore the Shore logos painted near the dugouts. In a nice touch the players were all wearing special Restore the Shore jerseys this week that had the names of cities on the back instead of the player’s names above the number. Many staff were also wearing these jerseys. They also had an auction table set up where fans could bid on the player’s jerseys. The team announced that $15,000 were raised on opening weekend. Way to go BlueClaws!! 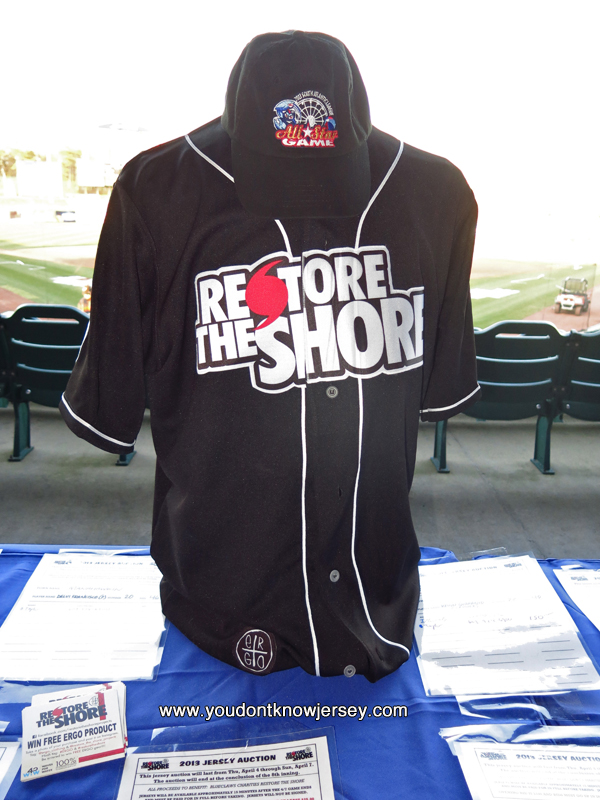 We thought this alumni report we found was a good idea.  It listed all the players who’d played for the BlueClaws and were now in the big leagues.  Check out the first name on there.  Ryan Howard, pretty impressive! 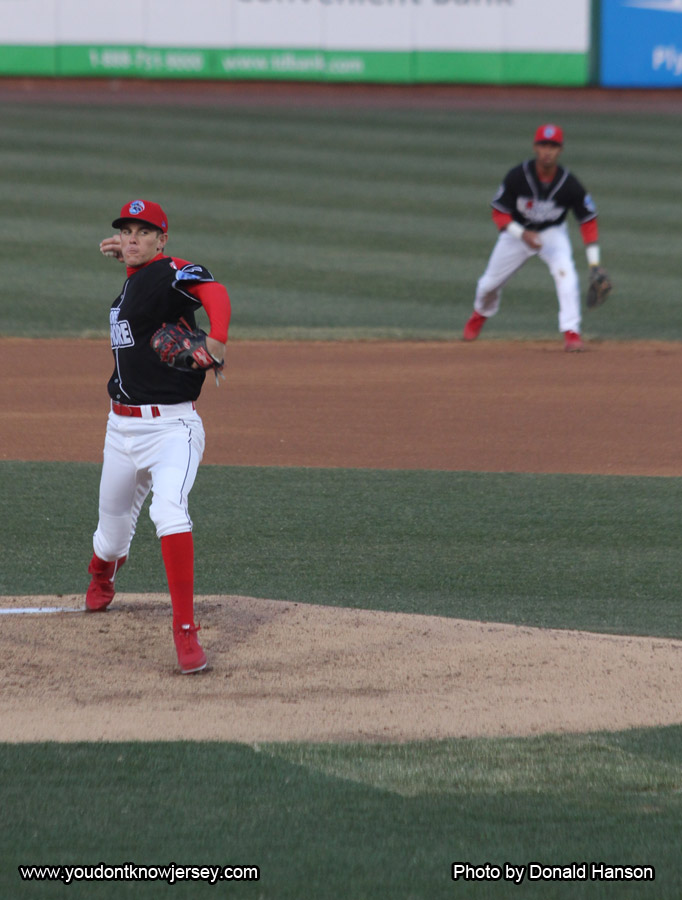 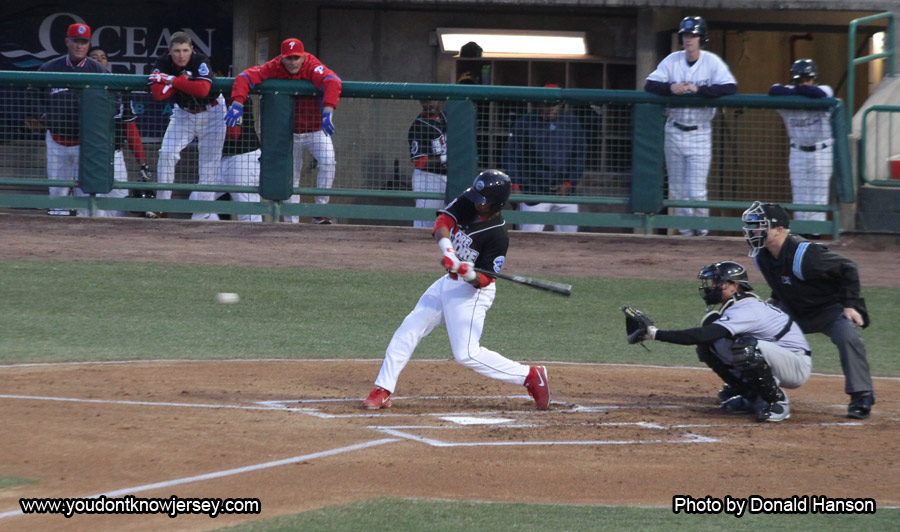 There were many fun events between the innings. There was a race between mascot Buster and a young fan. A race of different colored eyeballs and perhaps our favorite, a race between pork roll, egg and cheese. There was a contest between sumo wrestlers. Between one of the innings a conga line even danced down the promenade. 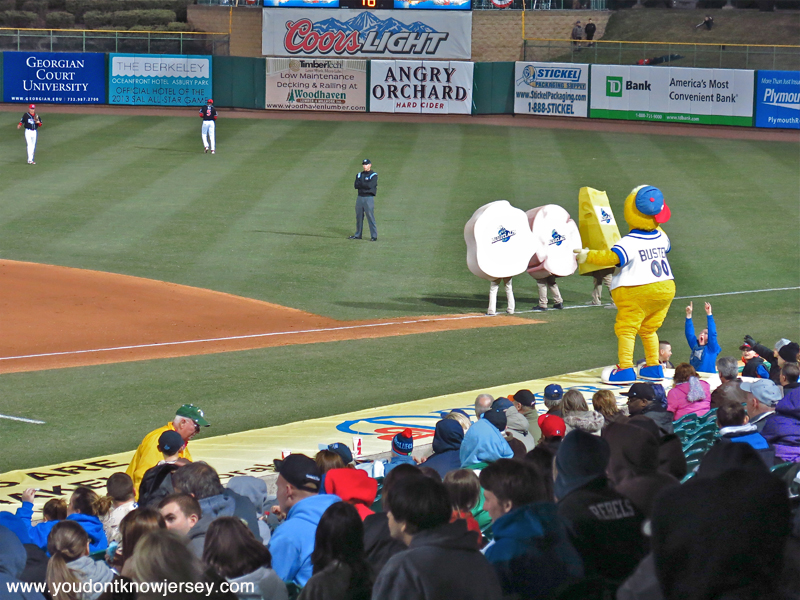 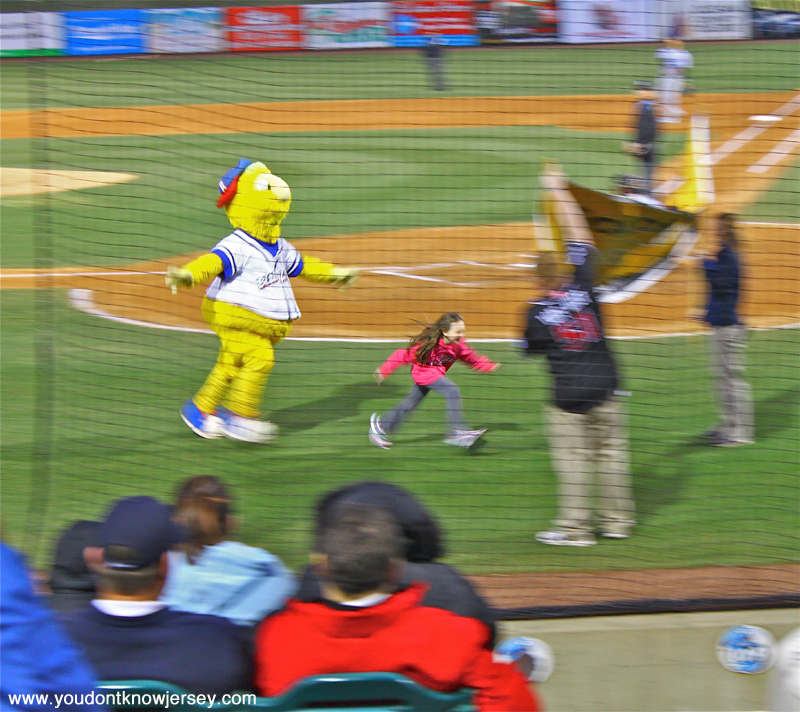 Here’s a little video of some of those events.

There were, as expected, many choices when it came to grub. From gourmet hot dogs, pizza, cheesesteaks and sliders, to nachos and Chinese food. Even turkey legs! There are the usual suspects as well; pretzels, cotton candy, and of course, Cracker Jack.

This is the Firecracker dog from the Dog House.  A red hot style dog that was really big along with chili, cheese and guacamole.  It was really good and very spicy, as advertised. 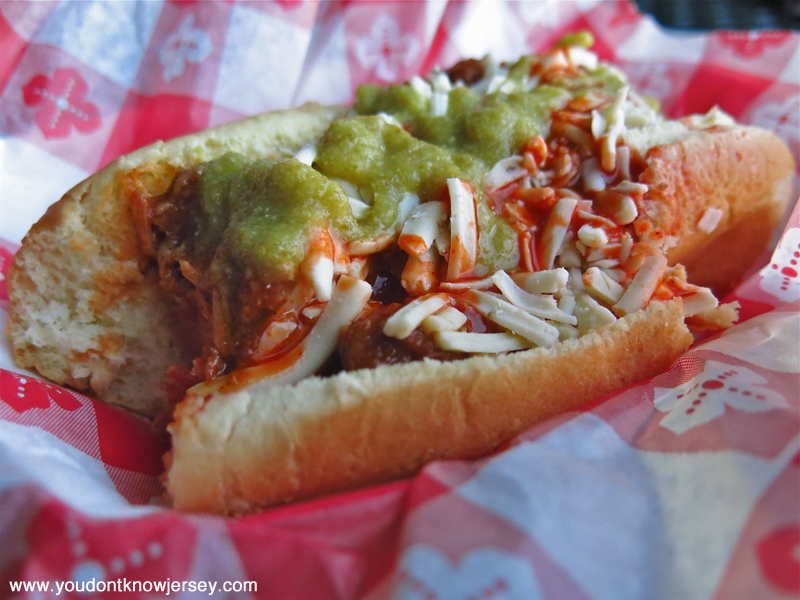 But our favorite surprise was a Surf Taco stand. Yum! 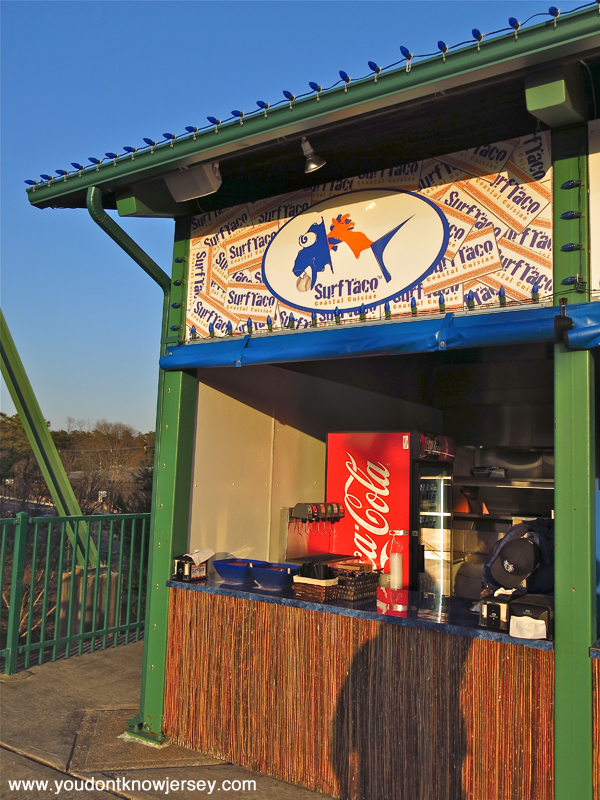 Check out this turkey burger.  This was part of the menu at the Horizon Healthy Plate concession sponsored by Horizon Blue Cross Blue Shield.  They had quite a few healthier options for dinner and everything was made fresh.  That meant that I had to wait a few minutes for my burger to be prepared but it was worth it because it was delicious.  Fresh turkey that was well-grilled on the outside but tender on the inside on a whole wheat roll with lettuce and red onion.  Really, really fresh and delicious and I didn’t hate myself afterward for having a greasy burger. 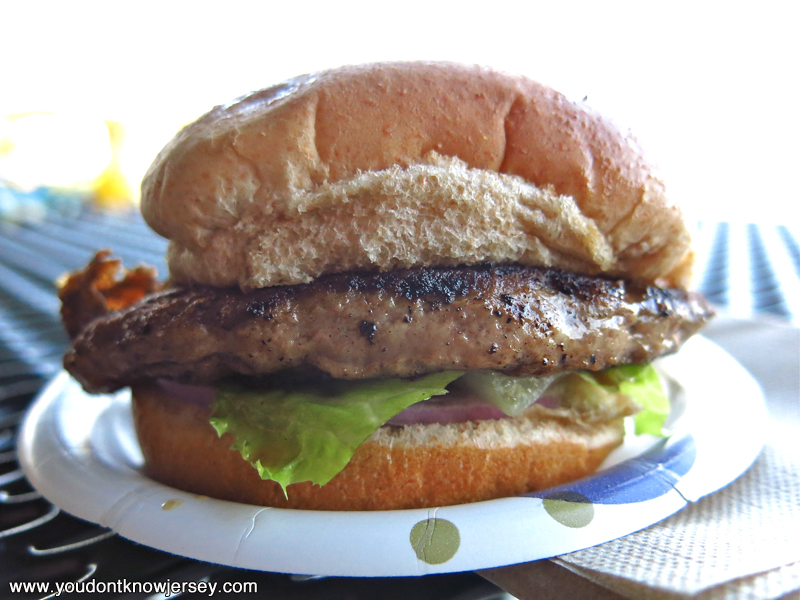 A local animal shelter even had an adoptable dog at the game.  He was a little nervous from all the attention but he was so popular that he’s bound to have found a home that night. 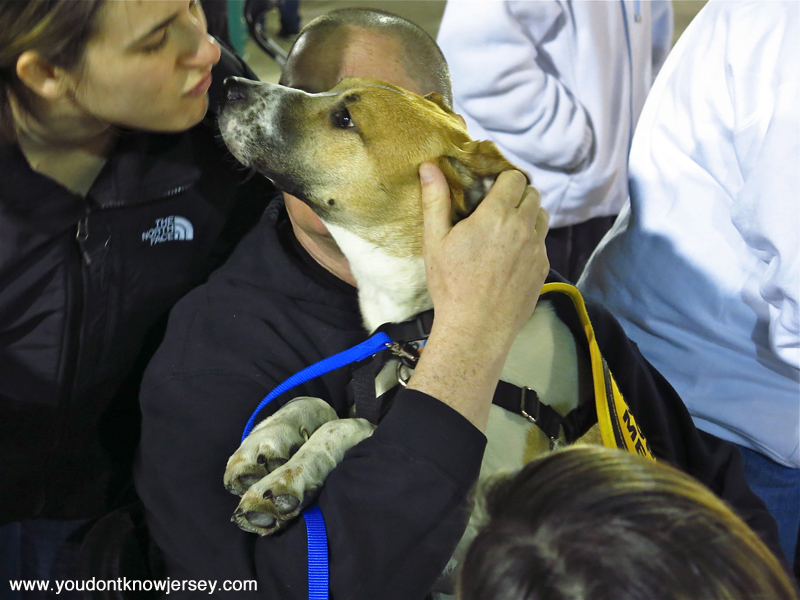 Did we forget to mention that there were also fireworks?  Every Friday night, they have fireworks after the game.

We have a more in-depth report on all the great food at the park here.  We also have a post with tons more photos, too.  We had such a great time visiting the BlueClaws that we’ve got tons more to tell you about so we have to split it up into multiple articles.

Pin It
Previous post:
Wine Tasting in Ringwood to Benefit the Edward J. Dalton, Jr. Music Scholarship Next Post:
Take Me Out to the Ballgame – A Visit to FirstEnergy Park and the Lakewood BlueClaws – More on the Food