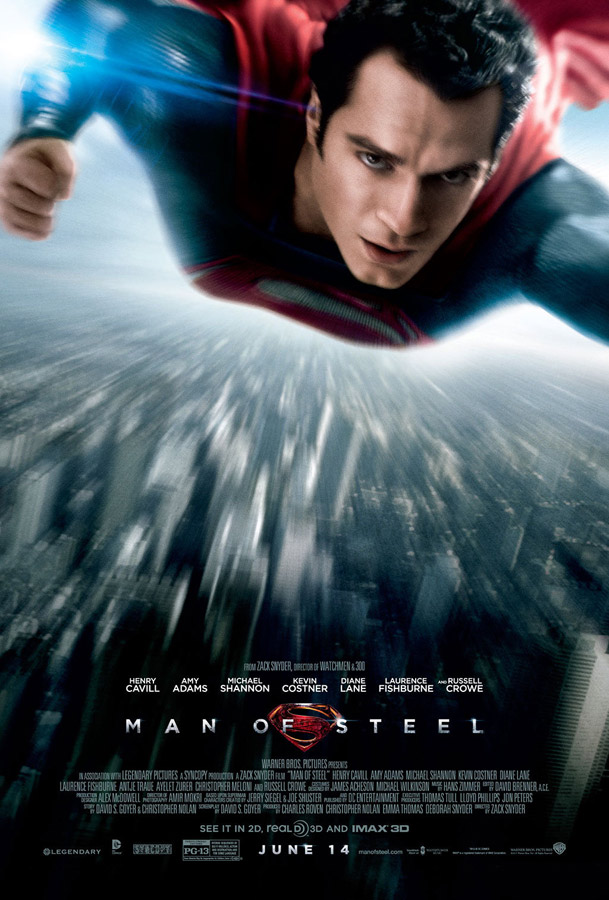 Man of Steel is directed by Zach Snyder (Watchmen) and produced and co-written by Christoper Nolan (The Dark Knight Rises). Considering that ‘Watchmen’ and ‘The Dark Knight Rises’ are 2 of my favorite superhero movies of all time, this movie should be a slam dunk, no problem. Instead, we have a problem, a big problem.

In the middle of this film there is a scene where Superman and Lois Lane are standing at opposite ends of the screen from each other in an open vista. At this point in the movie, I began to ask myself : Who are these people? Why are they in a relationship? Why don’t I care? Did I fall asleep and miss an hour of this movie? The reason why these questions were running through my mind is that Superman, Lois Lane, Perry White and most of the rest of the characters have little or no character development, personalities… or dialog for that matter. I didn’t know the slightest bit about these characters and consequently didn’t care at all about what happened to them.

This is so disturbing because such a terrific cast has been assembled and then given nothing to do. Amy Adams and Lawrence Fishburne are two of the best actors out there and they are given barely anything to work with. Not much screen time, a tiny amount of dialogue and only baseline personality traits that leave them as one dimensional characters. Michael Shannon, who brings an amazing presence and subtleties to every role he plays from ‘Revolutionary Road’ to ‘Premium Rush’ plays General Zod. Unfortunately, he is really only given one job here and that is to be angry and then at times to get a lot angrier. He does cool off a little at times but you know he could have done something great with the role but wasn’t allowed to. It is a huge let down from Terence Stamp’s beautiful execution of the role. In fact, Antje Traue as Faora-UI, the Ursa of the remake, comes across as much more menacing and effective by playing her character as more complex and not over the top. And finally, does Henry Cavill make a good Superman? Who knows. You could never figure it out from this film. He isn’t even given a chance to play Clark Kent.

The battle scene in Metropolis at the end of the film could compete with The Transformers as the worst waste of a big special effects budget. It is uncreative, repetitive and boring. In fact it is a difficult call as to which movie is more boring, this one or the previous movie incarnation of the man of steel, ‘Superman Returns’. My biggest fear about the recent Batman movies was always that they would have a dark tone but nothing else. That turned out not to be the case as the Batman movies were complete and had well developed characters and relationships. With the ‘Man of Steel’ those fears have been realized. There is nothing wrong with making Superman different. This movie wants to be darker so it removes the romance, fun and sense of wonder. But then it replaces them with absolutely nothing and that just leaves the viewer feeling empty inside.