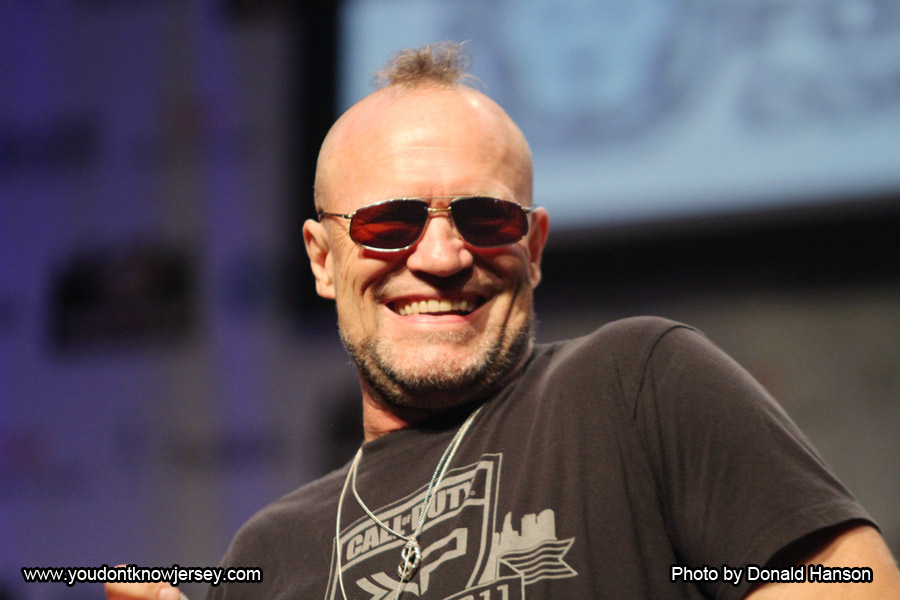 Multiple actors from the hit show ‘The Walking Dead’ were on hand at Wizard World Philadelphia signing autographs and taking questions from fans. In person, Michael Rooker is the most animated actor from the comic-based television show, which celebrated its highest ratings ever in its third season.

Upon hearing the host announce ‘Ladies and Gentlemen… Michael Rooker… he’s dead now, okay’ referring to his character’s fate at the end of last season, Michael replied in a sad tone “Don’t worry, Merle’s in a better place…” followed by a loud and bold “…..MARVEL!!!” which is a reference to his role in Marvel Comics new movie franchise, ‘Guardians of the Galaxy’. Do a Google search for Yondu and you will see the significance of Rooker’s haircut. Beyond that reference however, mums the word about that project. 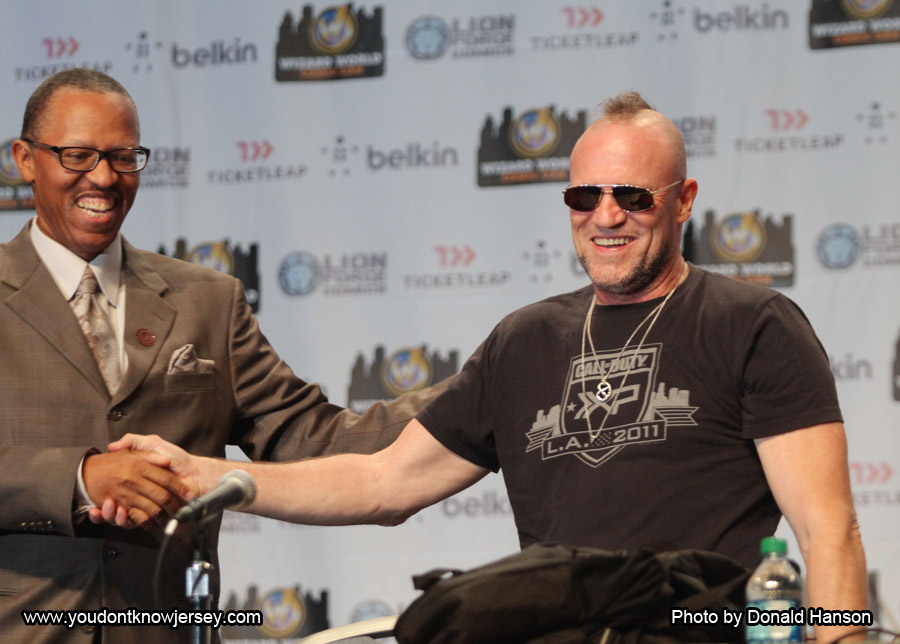 Here’s a hint if you are planning on going to Comic Con and asking a question about story line details of upcoming movies or television episodes… Don’t. Frankly, I don’t know why people want to ruin things for themselves anyway but it seems to be fairly common. As usual before the questions began the host made it clear that no one attempt questions of that nature or he will be sawing your legs off while the celebrity explains that they can’t comment on it. The crowd did a good job of asking thoughtful and interesting questions. Here are a few:

Q: How long before they kill (your character) off do you find out?

Q: What was the most challenging scene for you to do?

A: I think the most challenging scene was actually the monologue in season 1. The monologue was 4 and a half minutes or so and we shot it all the way through from beginning to end about 3, 4, 5 times without any breaks in-between. We had 4 or 5 cameras rolling at the same time each time we did the take and it was a killer scene. There was no stopping or going or any of that kind of stuff. We did everything in one and that’s always a challenge. And we were on the rooftop about 115 degrees as well, very challenging. 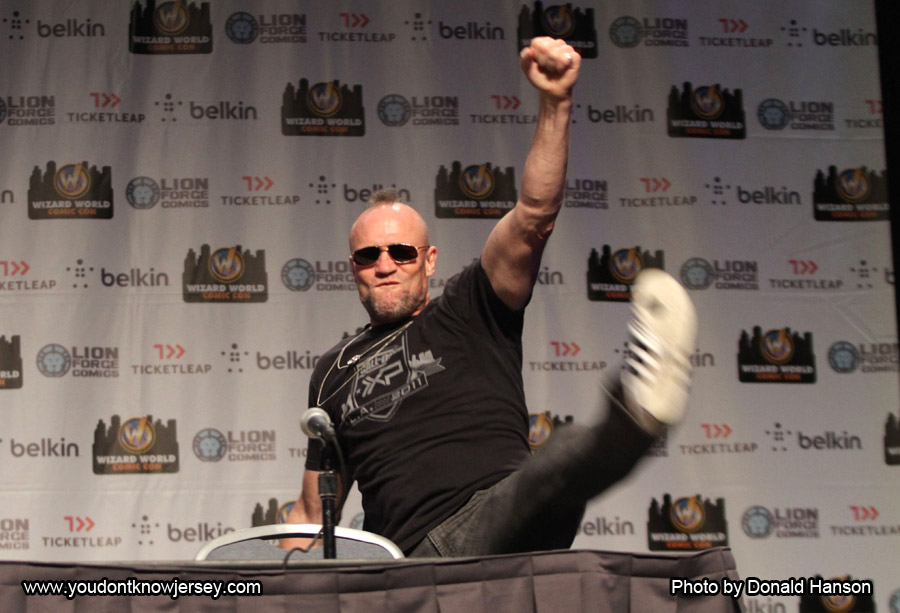 Q: If you could be any other character on the show, who would it be?

A: NOBODY, there aint nobody else! I’d say Carl but I’m only joking. I’d never wear that stupid hat.

Q: On a scale of 1 to 10 how badass would you rate yourself? 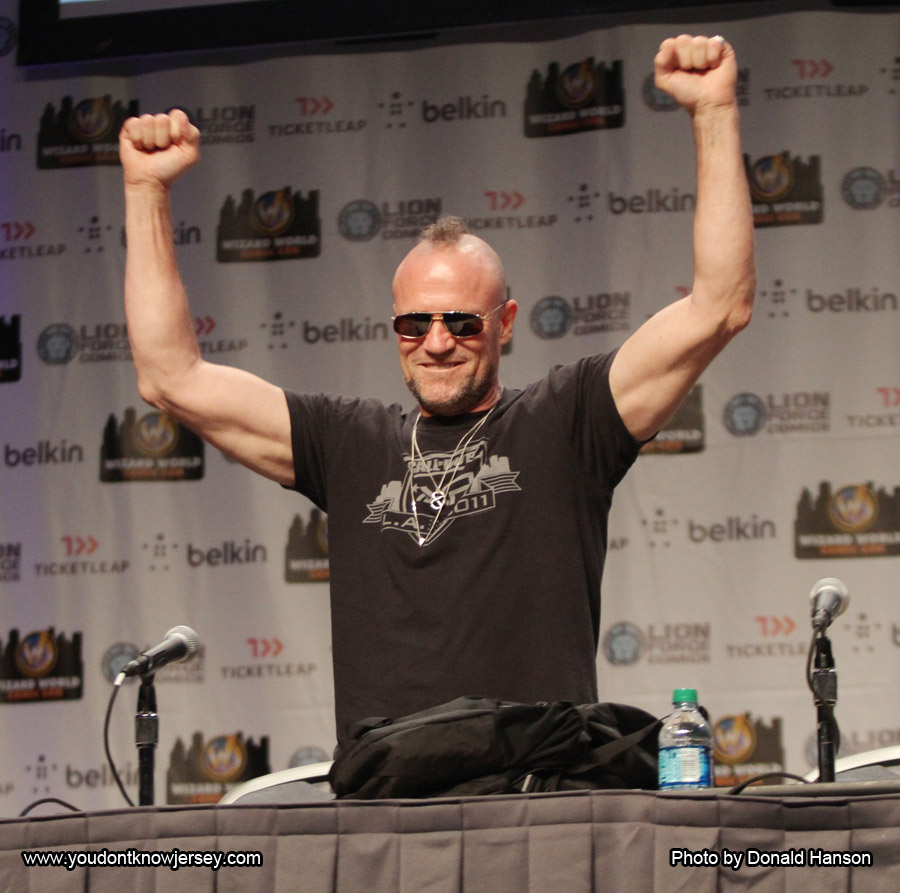 Q: What was the most fun scene for you to film as Merle?

A: There all fun my friend and the more challenging, the more fun so basically the most challenging was the monologue and that was the most fun. The second most fun was me talking to Norman Reedus in Season 2 and telling him if he doesn’t get up I’m gonna kick his teeth in and then watching the little bug crawl behind his head and biting on his skull and not saying anything. I was just wondering when he was going to get up and shake off. I was waiting and waiting and waiting He never did and after they cut he was like (running hands back and forth on his head to get the bug off). It was biting him the whole time and he was trying to stay cool. 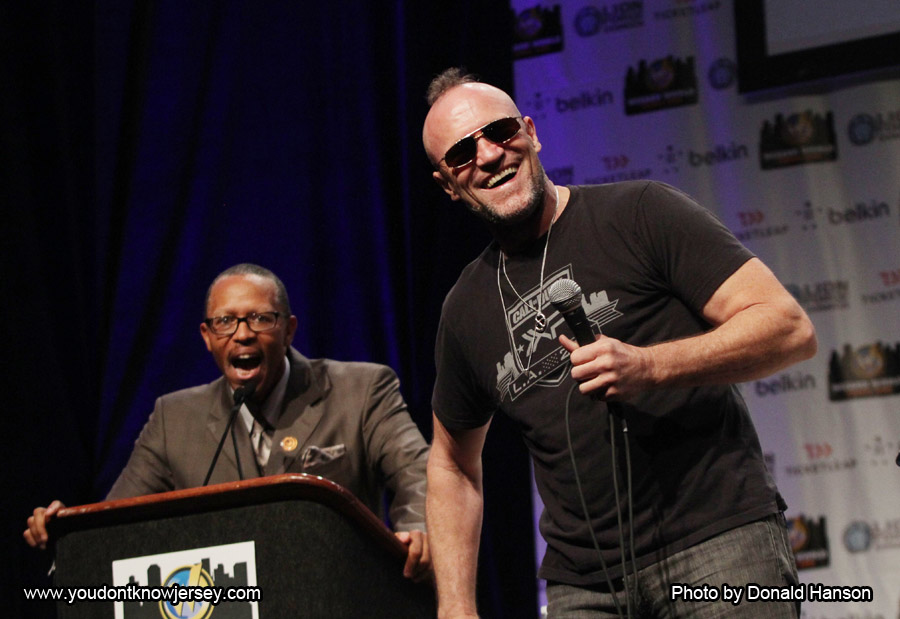 Q: Has Kirkman or anyone told you that you’re going to be in the comic book? 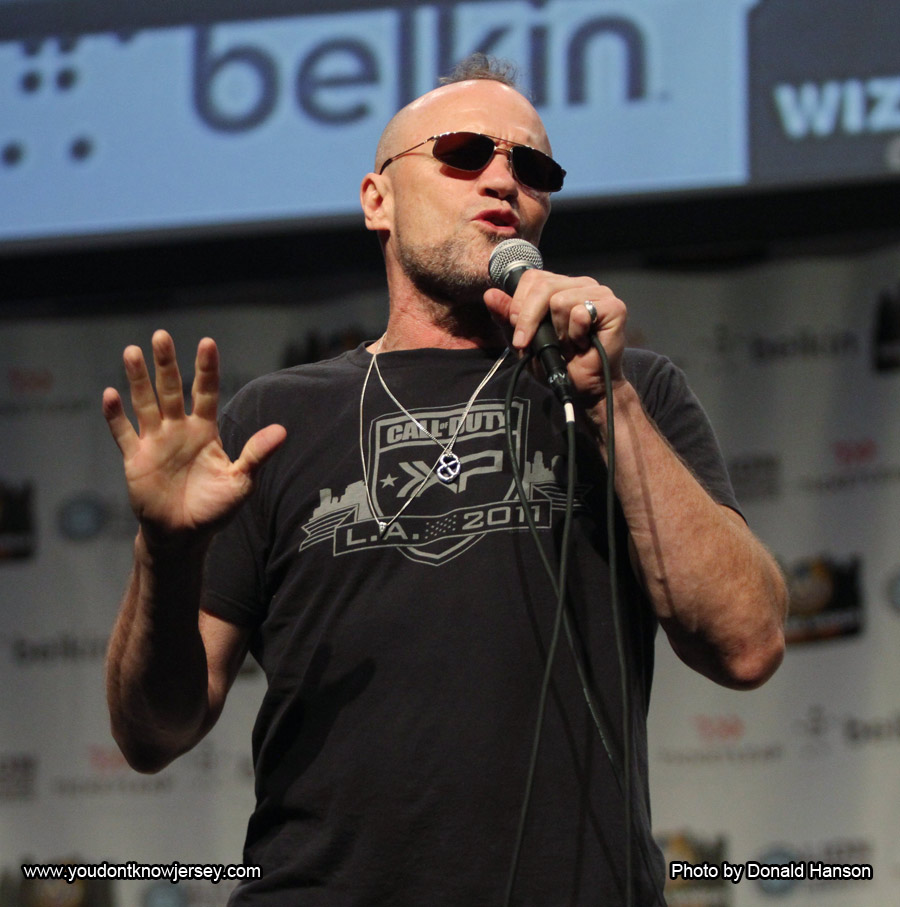 Q: What was your favorite walker kill?

A: Oh gosh, the first one dude! Remember when I go up.. (referring to when he jammed his “replacement arm” through the walkers head starting at the chin). That was so good, it was so great and the knife went right through that actor’s head, No never mind. (joking) 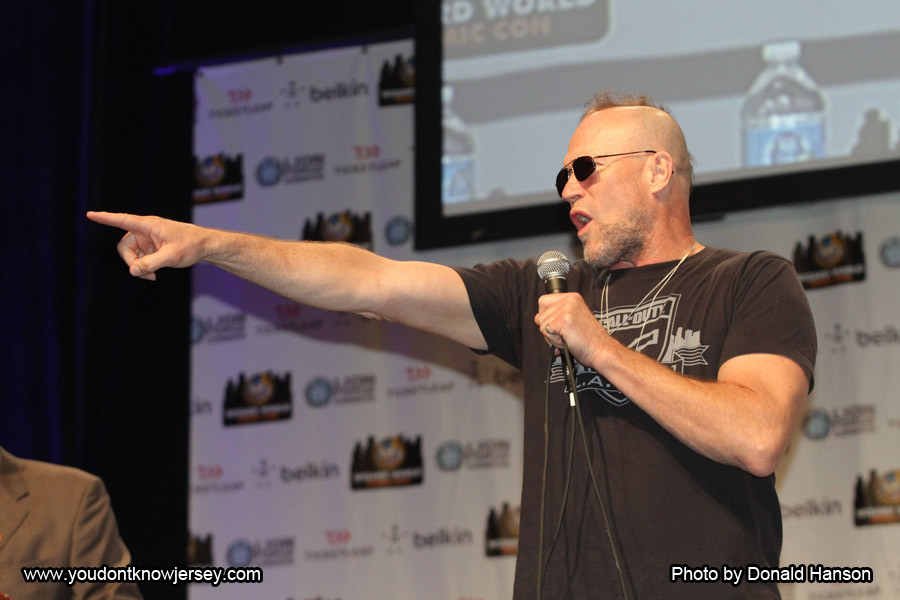 Q: Ho much did you enjoy beating up Glenn?

A: Totally enjoyed it. I was so pleasurable (laughs). I almost felt like having a coffee at the same time, coffee or tea while I smack him around. I’m telling you it was great, it looked real, it looked like I was really hitting him and he was selling it so well, and it was a great scene. 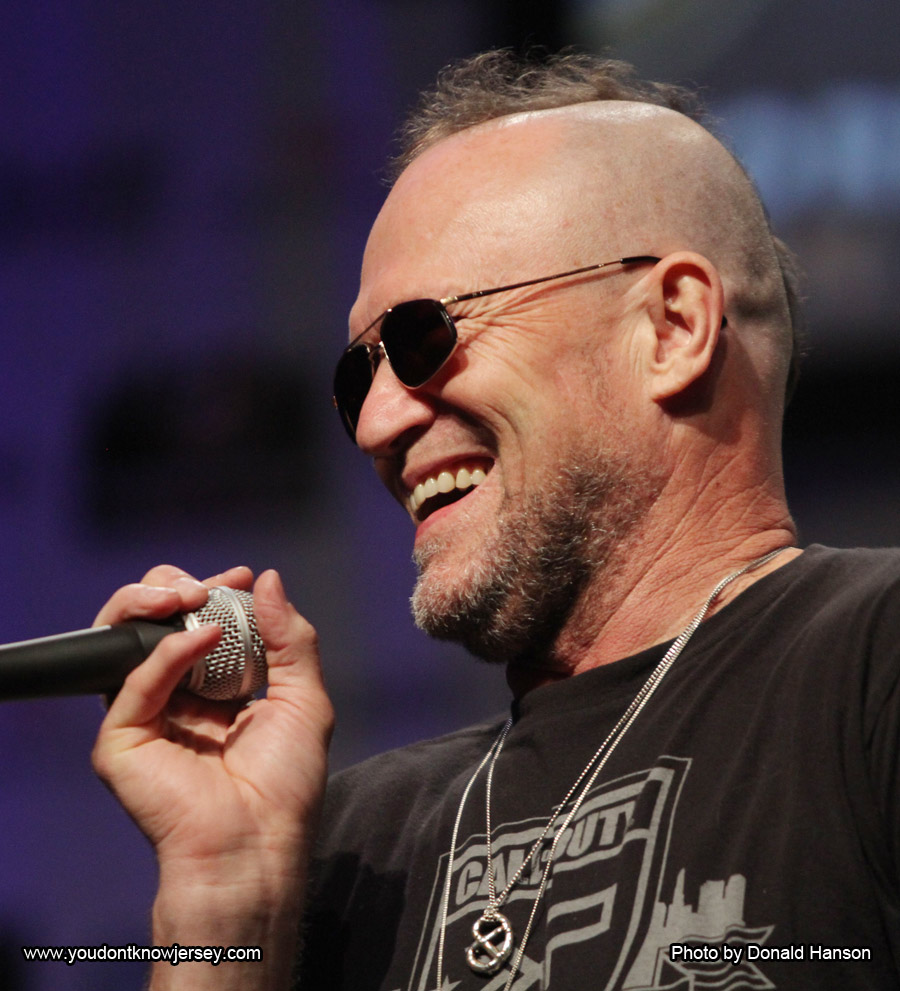 Q: What do you have coming up next? What can we see you in?

A: I don’t know… something, you have to go on the internet for that, I can’t talk about it.

If you want to see what Michael Rooker’s next project is, just type Yondu into Google Images.

If you missed Michael Rooker at Wizard World Philadelphia, he will be attending the Wizard World Comic Con NYC Experience June 28-30, 2013