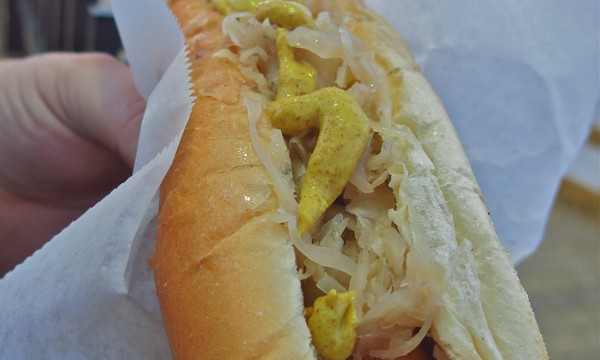 On the auspicious occasion of our fifth year of touring New Jersey’s best hot dog places, I asked Ed a simple question.  “How many hot dogs can you eat over the course of an entire day?”  He gave it some careful thought and replied, “Without getting sick? Eight.  I can eat eight hot dogs over an entire day.”

And, so the YDKJ Hot Dog Tour – Extreme Edition was born.  Vacation days were requested from work.  Websites, lists compiled from our travels around NJ and online message boards were scoured. Many prospects were researched for business hours and location.  We knew we couldn’t traverse the entire state—we’d need at least a long weekend for that and maybe a recipe for a post-tour juice cleanse. So, a crude map was devised and prospects were mapped out.  A clear route was seen down the east side of the state along the Parkway.  Next year, it looks like a route has already been discovered down the Delaware River side!  Within days, eight hot dogs were chosen. 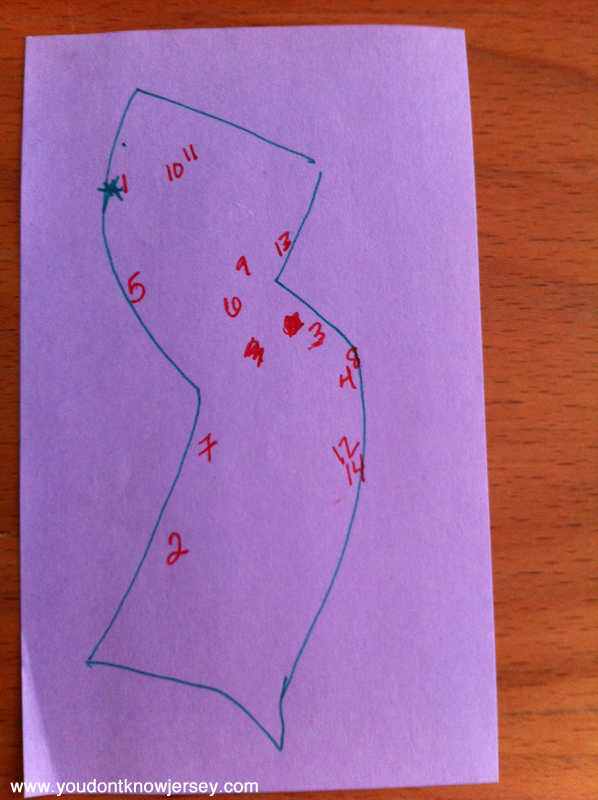 We skipped breakfast and headed out at 11:30am for Marci’s Dog House food truck.  Unfortunately, we checked two parks where she was supposed to be and we came up empty.  The second place we looked for her was in Linden and we happened to pass Pulaski Meat Products on our way there.  Coming up empty handed with Marci, we decided to see what Pulaski’s had to offer.  Surprise!  They have fantastic hot dogs! 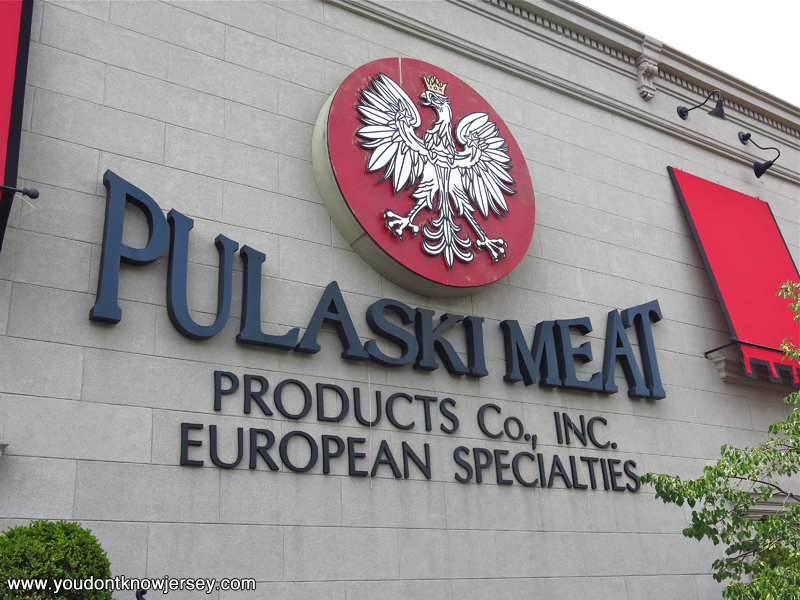 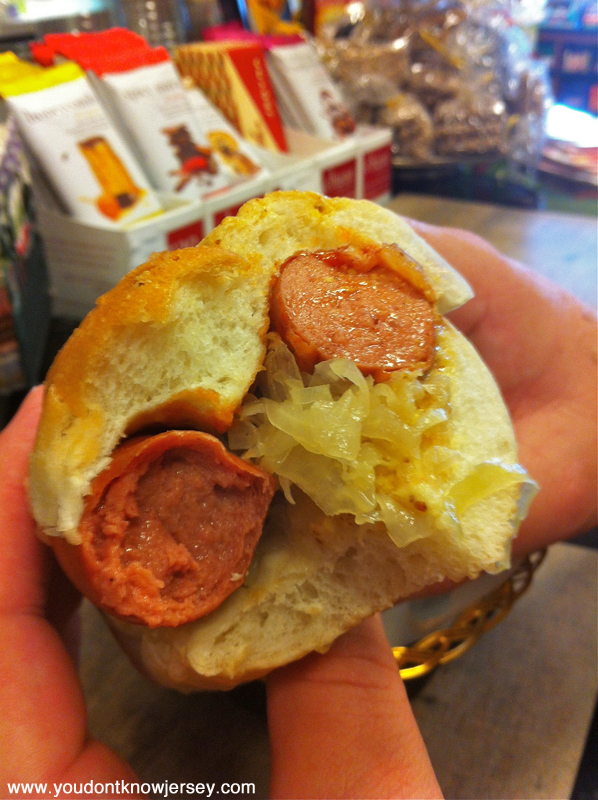 They offer a Double Down dog with your choice of two beef or pork franks.  We got beef franks in this one with kraut, onions and mustard. The beef franks were really spicy and had a great snap. 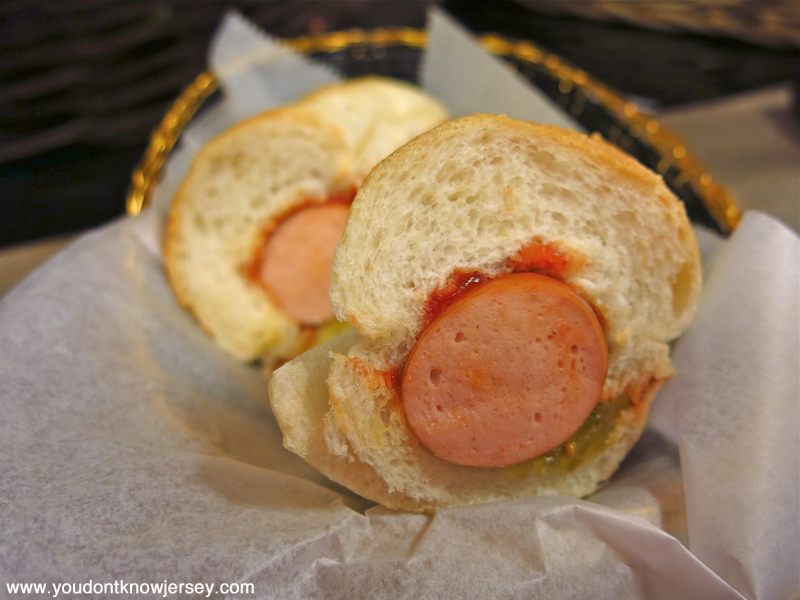 In the interest of being complete, we also tried the pork dog with relish and catsup.  The pork was tender and not as spicy as the beef frank.  It was our favorite but only by a small margin.  The pork frank was also thicker than the beef ones so it held up well against the large pretzel bread roll.  With visions of pierogi and stuffed cabbage, we had to physically pull ourselves away from Pulaski’s to get on to the next dogs. It was hard to not fill up at the first place!

Next on our list was Destination Dogs in New Brunswick. Their wide selection of different kinds of handmade sausages brought us here.  They have regular dogs on the menu but we were there to try the non-traditional ones on this day. 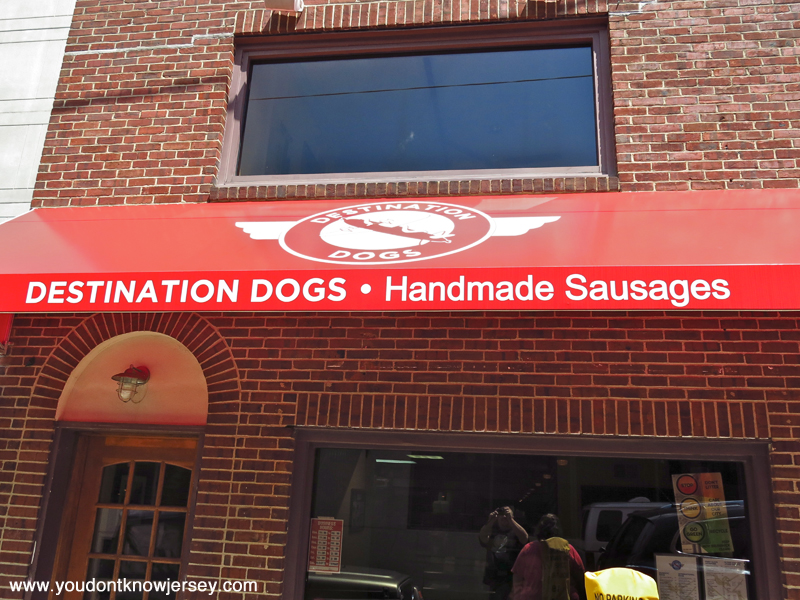 All their specialty dogs are named after an international or domestic airport complete with airport codes.  We had one from each category. First up, Spain’s Conquistadog (BCN) that was chorizo with fried potatoes, spicy mayo and scallions. The chorizo was not overly spicy and was lightly cured enough that you could easily bite through it.  Ed liked the spicy mayo so much that he wants to try and find some equivalent at a grocery store soon. 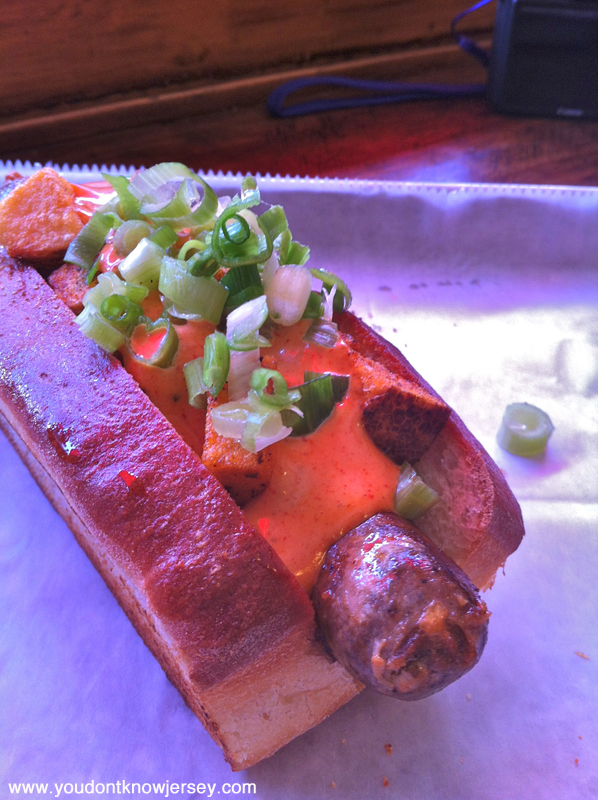 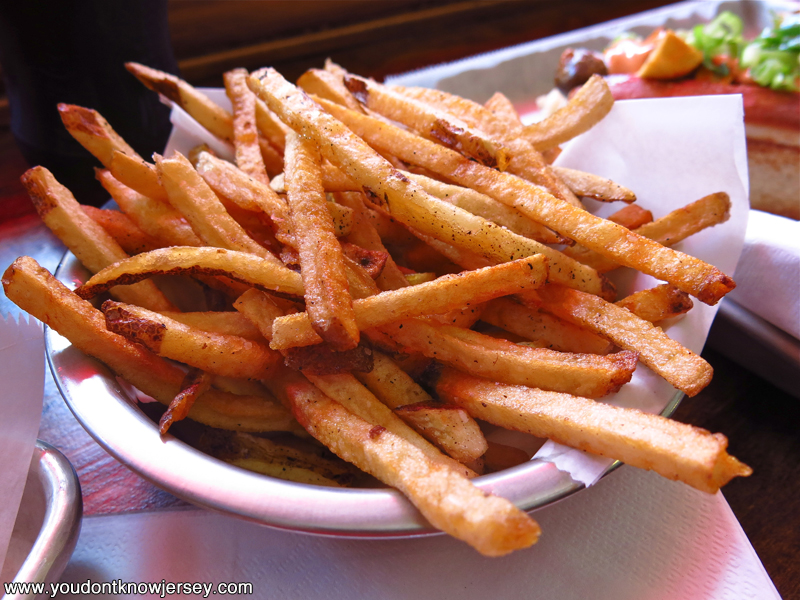 Friday is Duck Fat Fries Day at Destination Dogs so we took our one and only diversion from hot dogs for the day and had to get an order of those fries.  Glad we did!  The duck fat didn’t overpower the potatoes but enhanced them with a lard-like mouth feel and extra crispyness.  They’re totally worth waiting for Friday! 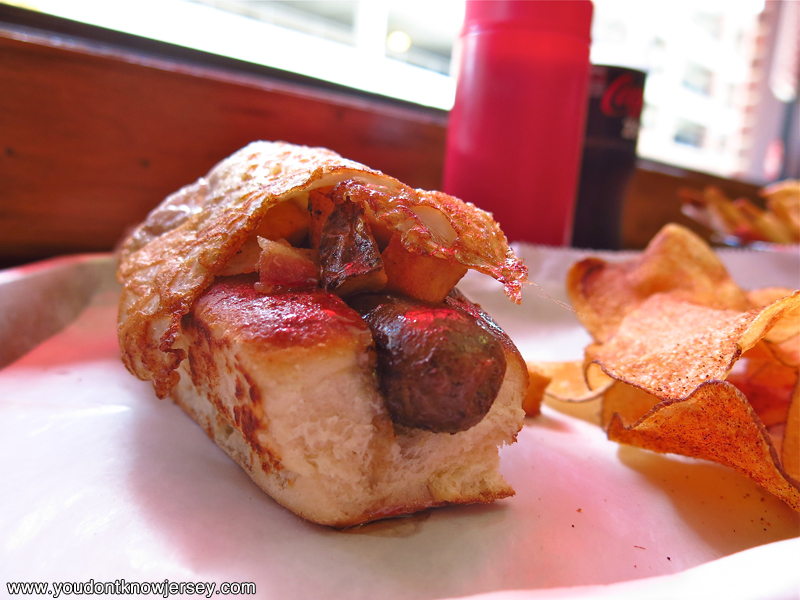 And finally, the Paul Bunyan (MSP) from Minnesota. Breakfast sausage with fried potatoes, a fried egg, bacon and maple syrup.  I want to eat this every day for breakfast.  The breakfast sausage was spiced but not hot and the bacon and potatoes were nice and crispy.  The maple syrup was applied in just the right amount to get all over my hands and be delicious but it wasn’t dripping all over me and ruining my shirt for the day.  I fully expected to get some mustard or chili on my shirt over the course of the day but not maple syrup.

Once again, we had to tear ourselves away from our current venue and get on to the next stop. We had to pace ourselves and be smart about how much we ate if we wanted to be able to eat anything later in the day and I was worried that the duck fat fries would be my downfall.  Luckily (?), the next place we tried to visit was closed so we had to call another audible along the way like we did with Pulaski’s in Linden.  Jersey Joe’s in Port Monmouth had Closed Indefinitely signs in all the windows.  So, alternates were put into place later in the day and we moved on to our next scheduled stop. 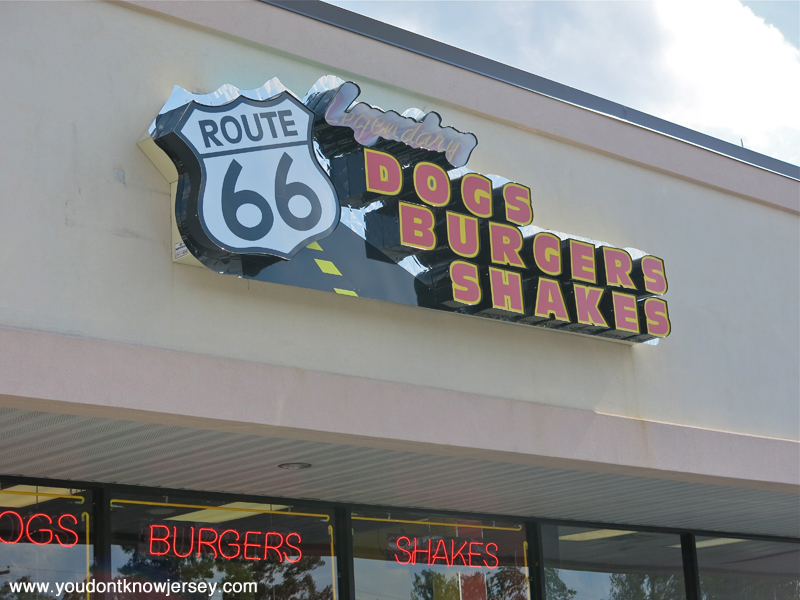 Classic chili dogs were on the menu at Route 66 Grill in Long Branch.  In fact, Long Branch was home to two stops for chili dogs on the tour.  This first one was a classic Plainfield style chili.  Dry and meat-only with some light spices.  Perfect classic “Texas Wiener” style dog with chili, onions and mustard. 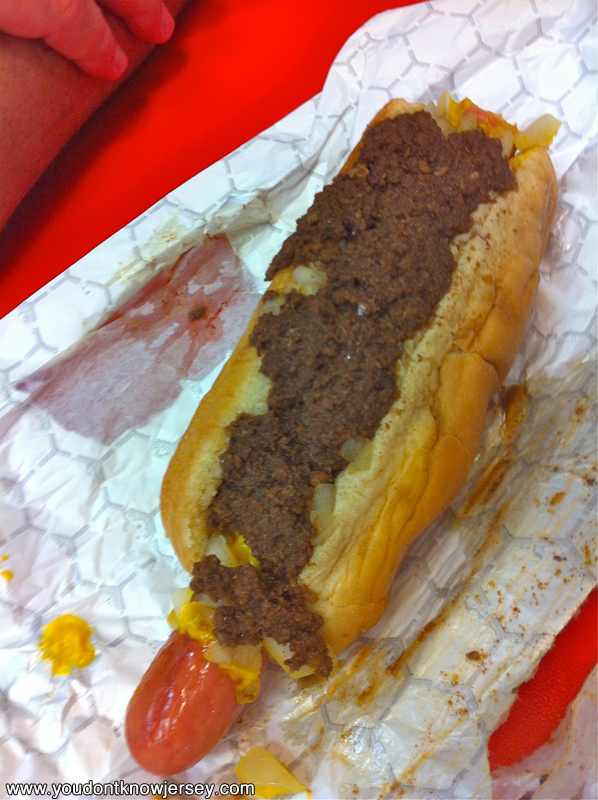 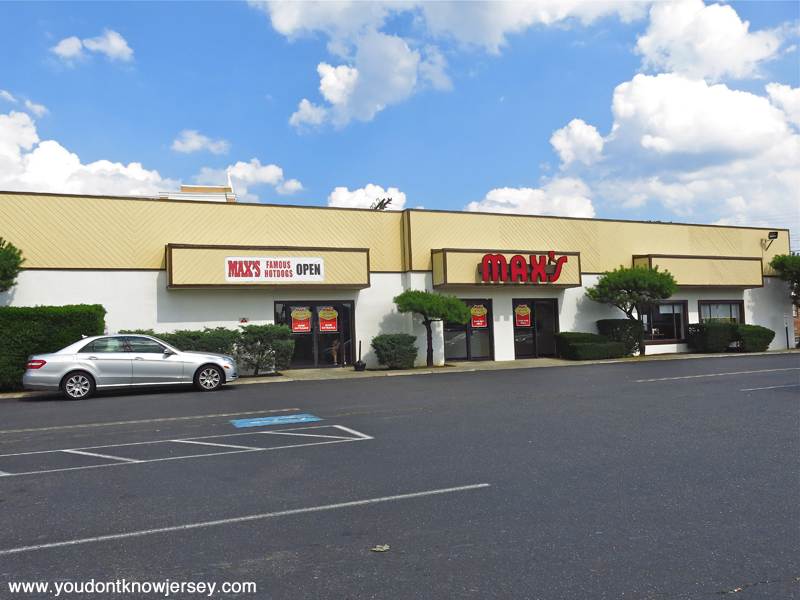 Their footlong dog with tons of amazingly homemade-looking chili made us order just one and share it.  If we both tried to eat one of these monster dogs, we’d be in trouble later in the day and it was only 5:00pm.  The frank is a special beef-pork blend made only by Max’s and is fried until it’s extremely crisp and kind of shriveled (in a good way).  It’s the perfect vehicle for that chili, though. Lots of surface area for chili and crisp enough to not wilt from the weight of the beans, meat and veggies in there.  Unbelievably, it tasted a lot like my homemade chili which made me crave more.  We’d go back just for more chili! 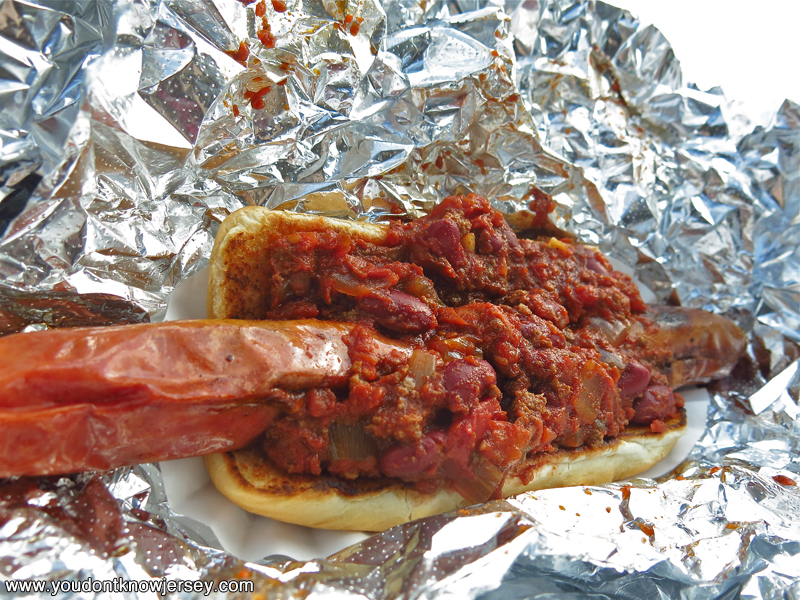 On to the shore where we stopped at Tony’s on the Asbury Park boardwalk thanks to Yelp.  This was our audible call after Jersey Joe’s was closed. 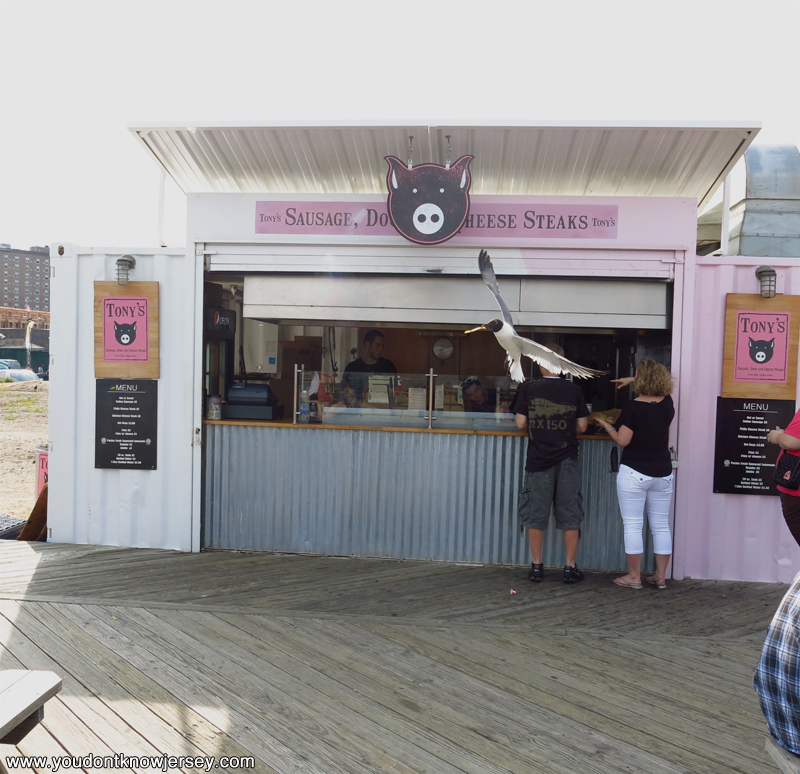 Many menu items looked good here as we waited in line to grab a dog.  The shore birds were plentiful as people got their fries and cheesesteaks.  We even caught this one in flight (above) flying off with his french fry booty. 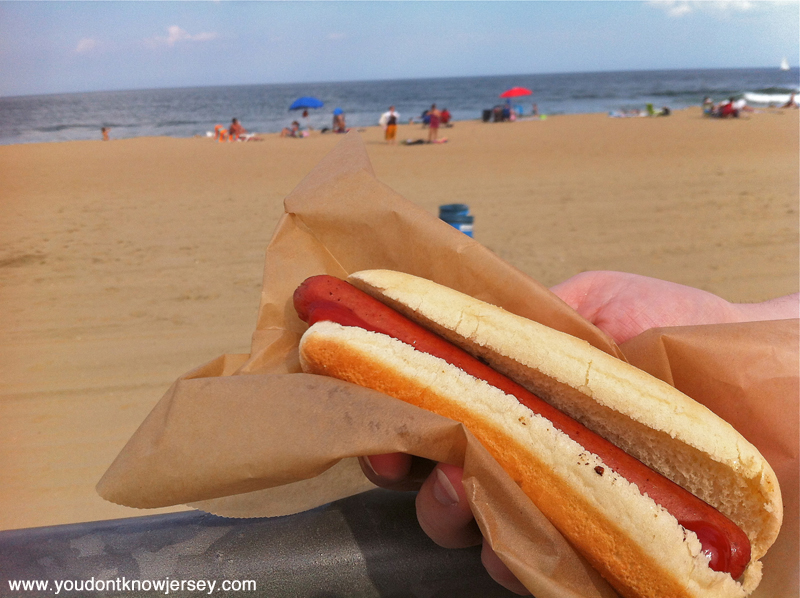 The hot dog was standard fare but the view was amazing.  Hey, all hot dogs can’t be artisan affairs with homemade sauces and fancy meat.  Sometimes, a plain dog with a great view on the boardwalk is exactly what you need.

Dinner time was closing in on us and we were only halfway through so we needed to get moving.  On to Toms River and Joe Joe’s Italian Hot Dogs. To be fair, we’ve tried many other Italian hot dogs so we speak from some experience.  We think this was the best one we’ve ever had. 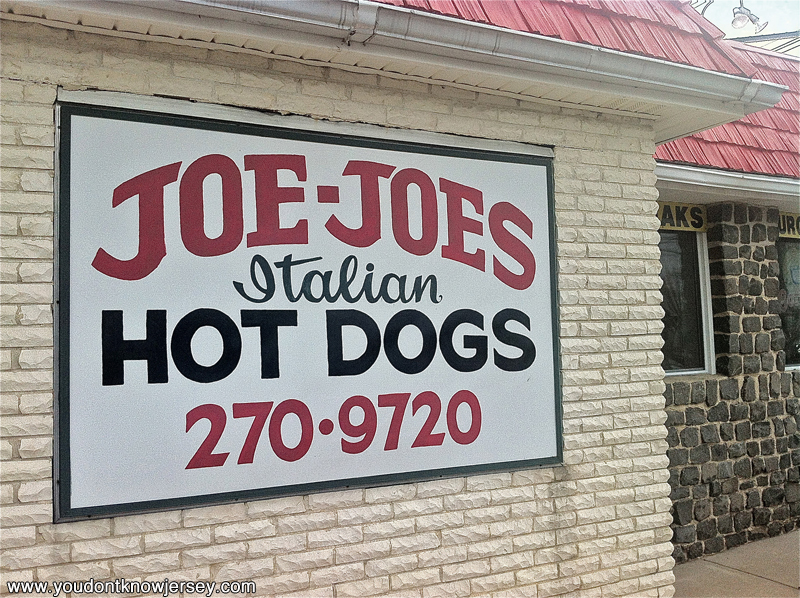 Delicious thick bread but not SO much bread that we couldn’t taste anything else like some other places.  Fresh and I mean FRESH potatoes, lightly fried.  Delicious hot dog and large pieces of chopped peppers and onions.  Even though we ate many many hot dogs yesterday, I could drive to Toms River today and have another one of these right now. 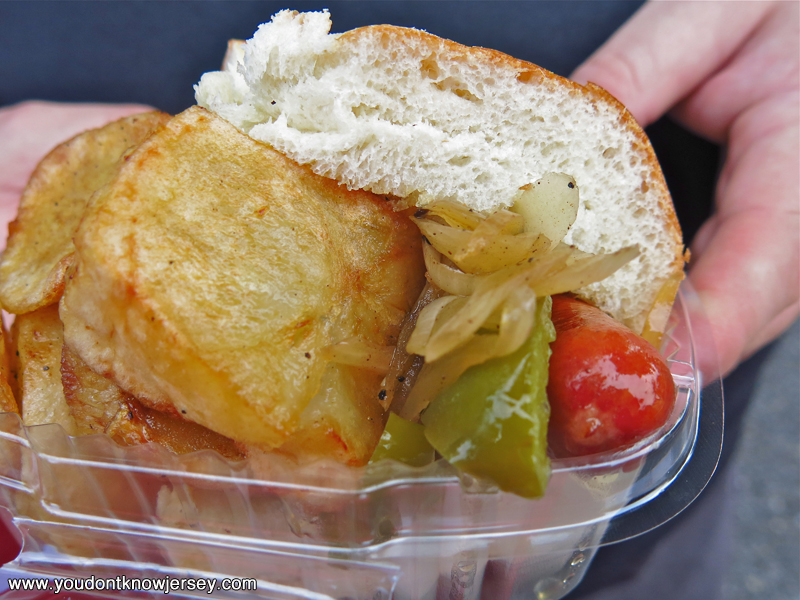 Down to Seaside Heights next where we were denied another planned dog at Bubba Dog House on the Seaside boardwalk.  TripAdvisor reviews indicated that it was open for the summer but when we arrived on Friday night, it was open looking but deserted. Doors open, lights out…  it didn’t look like we were going to get to try Bubba’s dogs.

So, we walked the new boardwalk looking for the best looking dogs around and Midway Steak House won out. 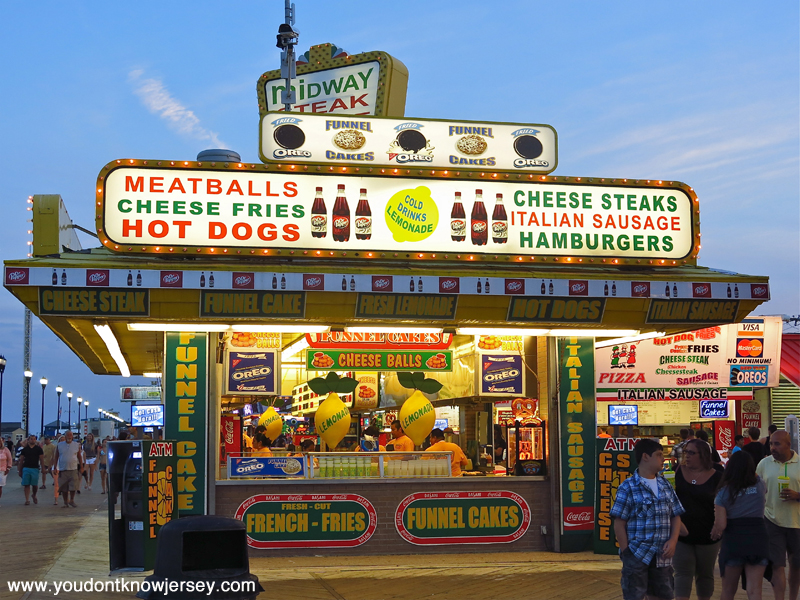 Was there really any other option?  It’s a Seaside Heights icon and their stand is a beautiful beacon as the sun sets. 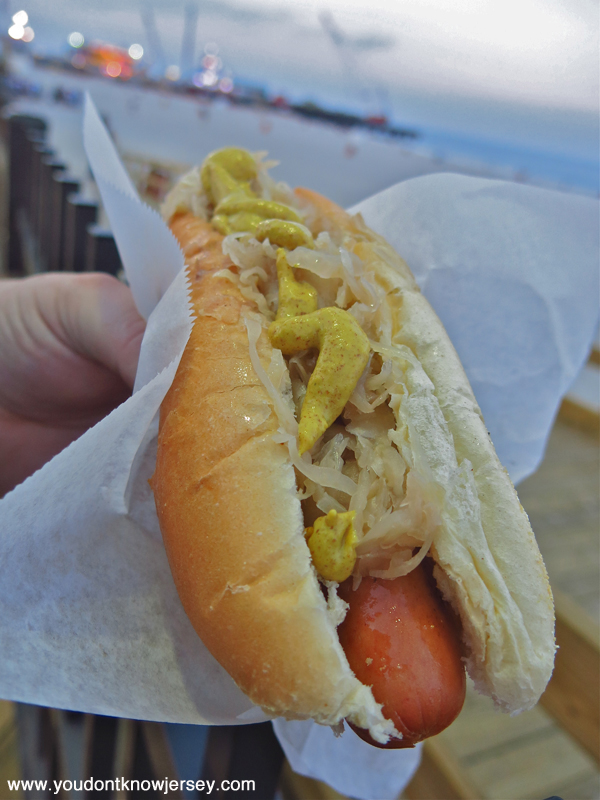 Even more beautiful was eating our frank with kraut and mustard overlooking the Casino Pier’s rebuilding effort that already has some rides up and running.  Seaside was such a part of so many people’s childhoods that regardless what you think of it now, it’s fantastic to see it back to life.

The sun was setting and it was time to start heading back home.  Back to one of our familiar haunts for the three dog special and a Yoo Hoo. 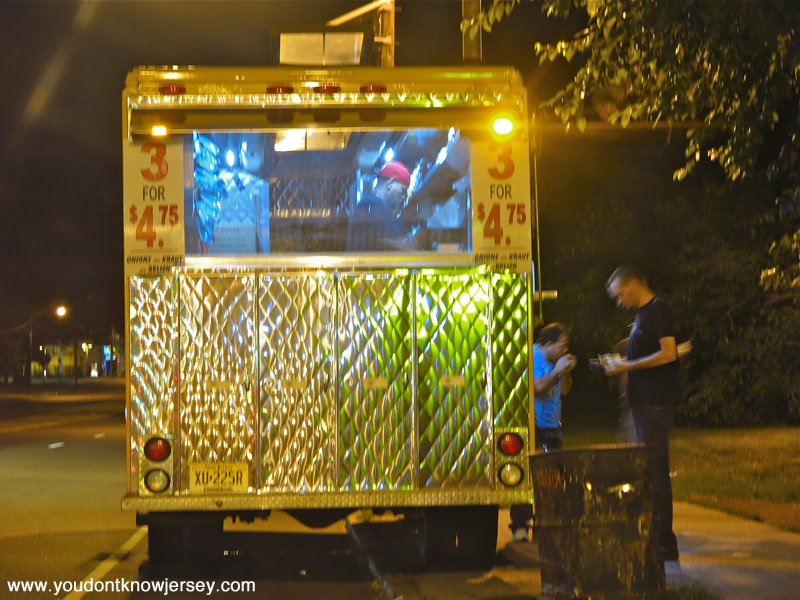 JJ’s Hot Dog Truck on Bloomfield Avenue in Newark.  Dirty water dogs with choice of kraut, relish or hot onions, three for $4.75.  Yes, they have lots of other toppings:  Pepperoni, mushrooms, cream cheese, etc.  But, how can you not get the classic at least once in a while? 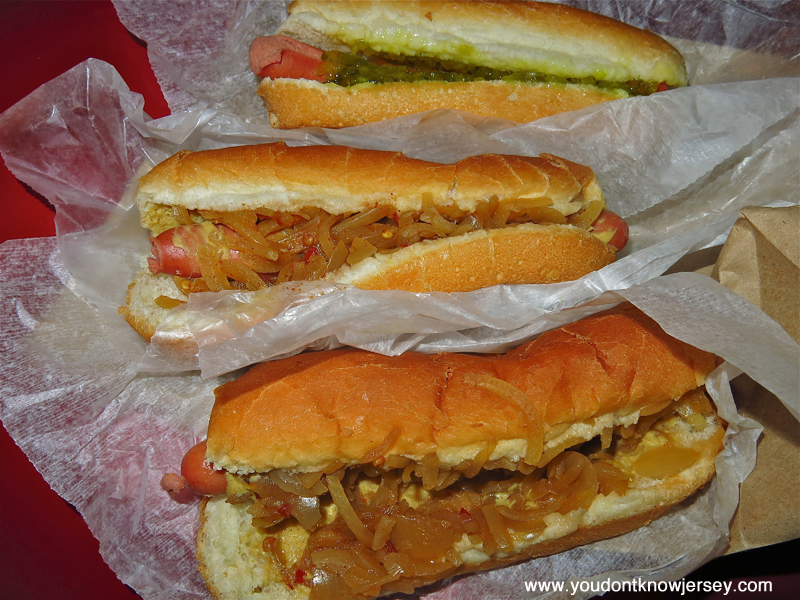 We rounded out the night on two with hot onions and one with relish.  Perfectly simple and delicious.

You’d think after eating all those hot dogs we’d feel terrible.  But, we felt surprisingly good that night and even the next day.  Not only was the food good but everyone we met was friendly and happy we were there.  New Jersey loves its hot dogs and we still can’t wait to try more!

Pin It
Previous post:
Movie Review – The Wolverine Next Post:
This Week in Veggies – What’s Fresh at Your Local Farmers Market