Welcome to our fourth article in a series we’re calling Take Me Out to the Ballgame! We’re visiting all of New Jersey’s ballparks this year and telling you all about them. So far, we’ve visited Campbell’s Field and the Camden Riversharks, FirstEnergy Park to see the Lakewood BlueClaws and Arm & Hammer Park and the Trenton Thunder.  This time around we visited downtown Newark’s Bears and Eagles Riverfront Stadium home to the Newark Bears. 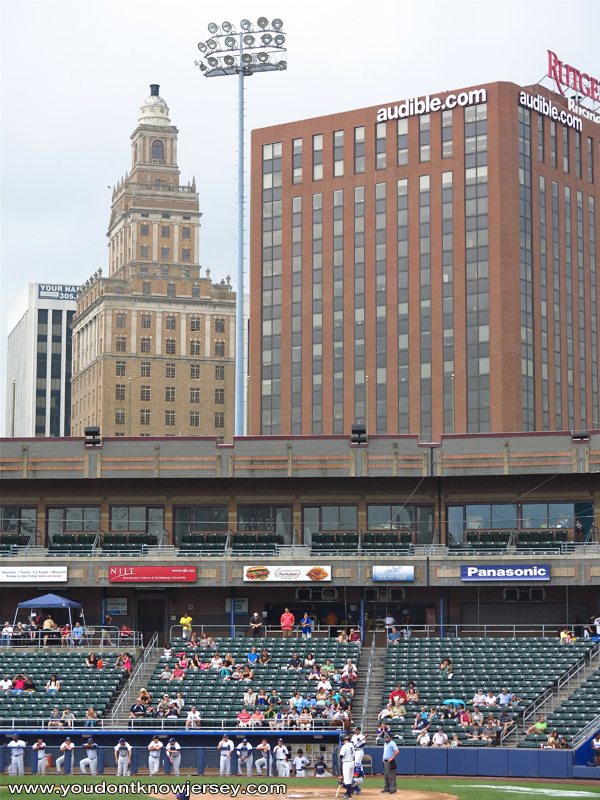 The stadium is nice but the real winner is the gorgeous city backdrop.  We moved around to a few different seating areas and we couldn’t find a bad seat.  We love that you can get so close up to the action in minor leagues.  The day we attended the game it had rained and was threatening to rain again so there weren’t many people in the stands.  No one seemed to mind that we moved around and sat in different places.  It couldn’t be easier to get to the stadium.  We took Route 21 right into downtown Newark and parked in the garage right next to the park.  We actually had a really nice overview of the field from the garage. 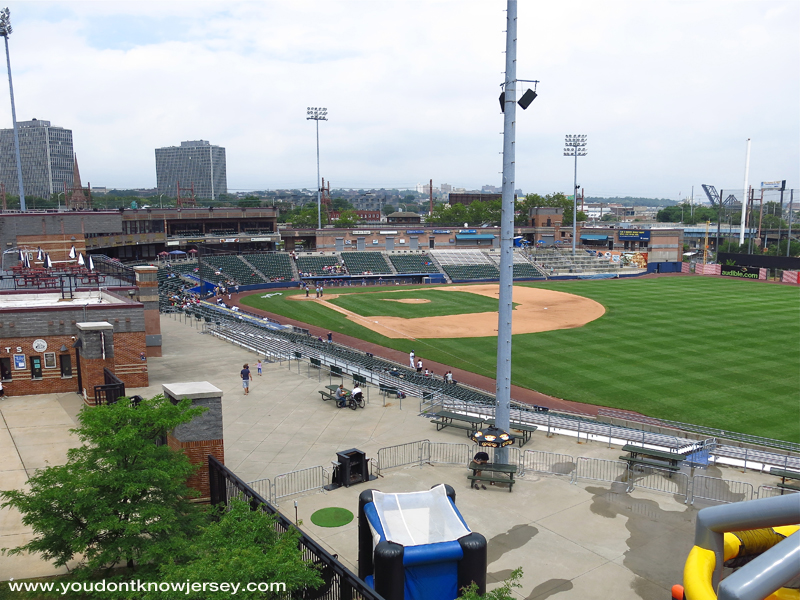 The stadium is also right outside Newark’s Broad Street Station so you can take the train, light rail or bus to the game and not worry about parking.  It really couldn’t be more convenient.

Action got underway soon after we arrived and it was a good game.  Plenty of runs scored and chances to cheer and scream. 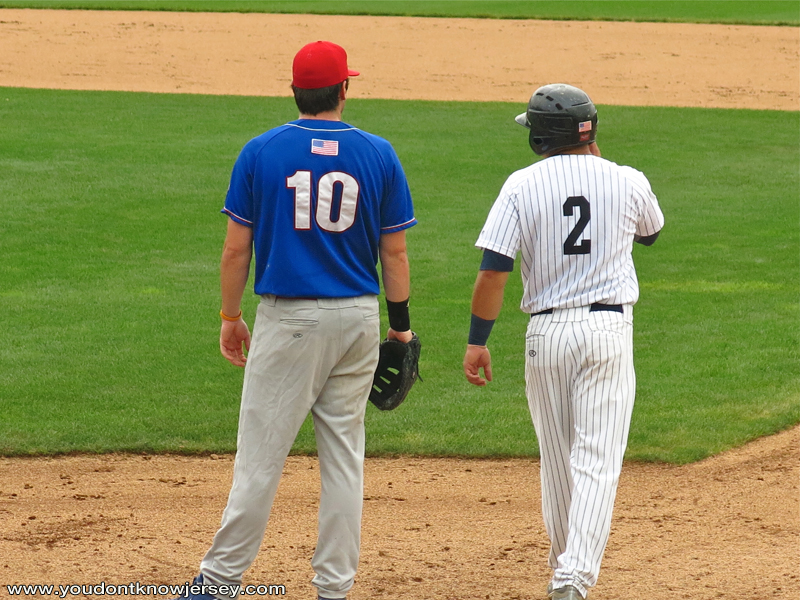 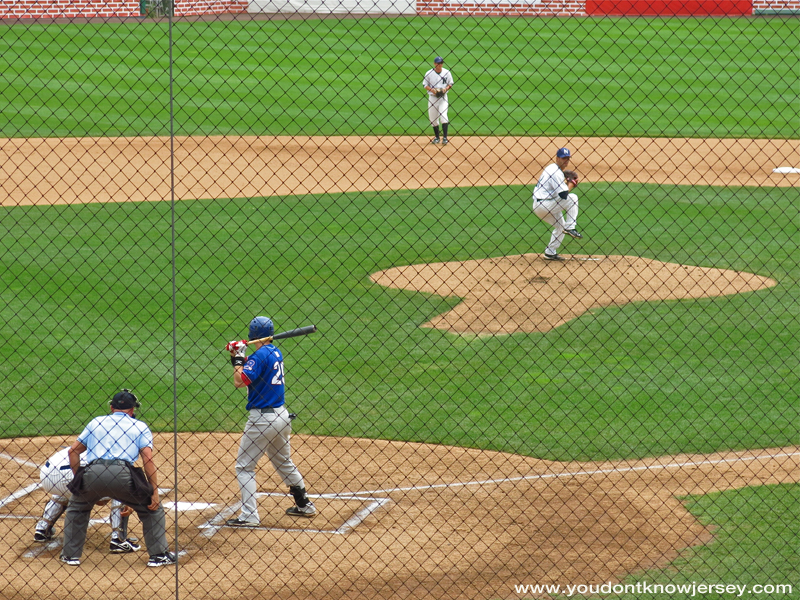 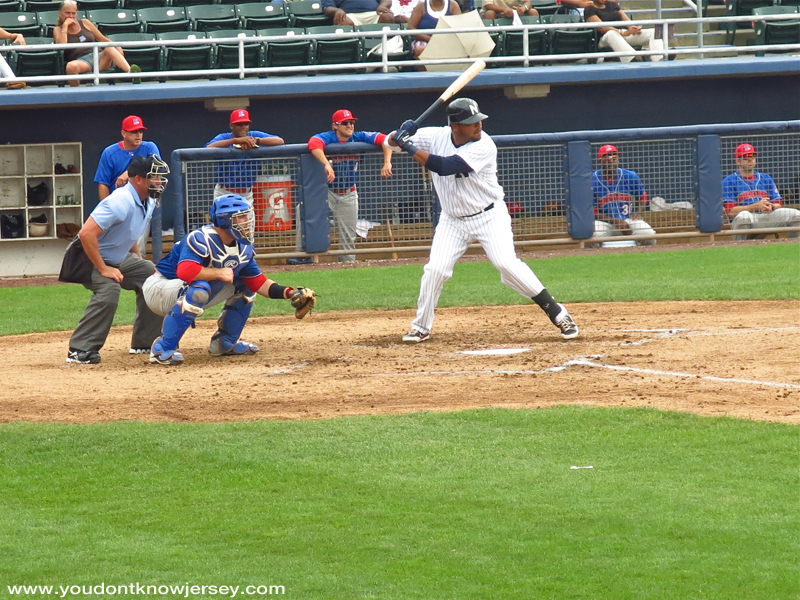 Of course, soon we were moving around the park and found the food stalls. Classic baseball fare was on the menu in Newark.  Camden and especially Lakewood spoiled us for amazing food finds but Newark sticks with the basics.  We tried the chicken fingers, hot dogs and a soft pretzel and found them all very good.  The soft pretzel was especially big and freshly made.  Sometimes those pretzels can sit around for a while and get stale. The pretzel was so good that we ate it all before we remembered to get a picture! 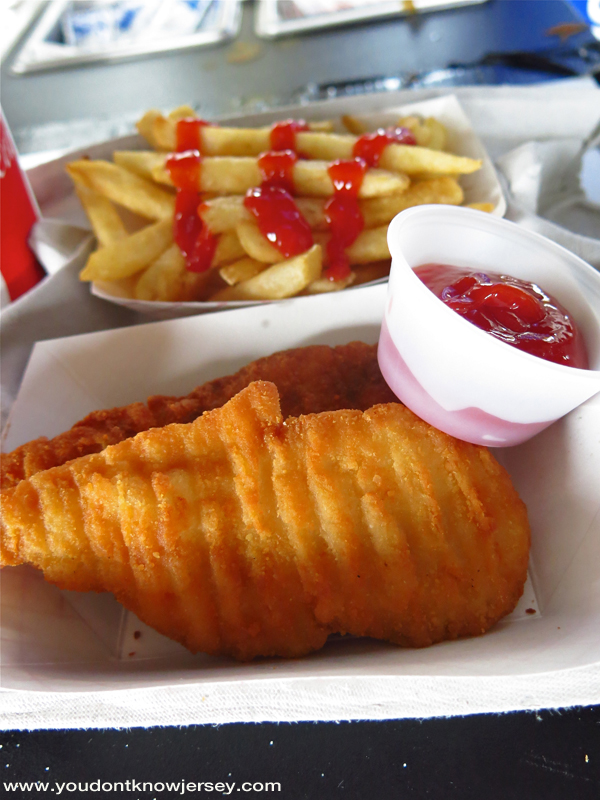 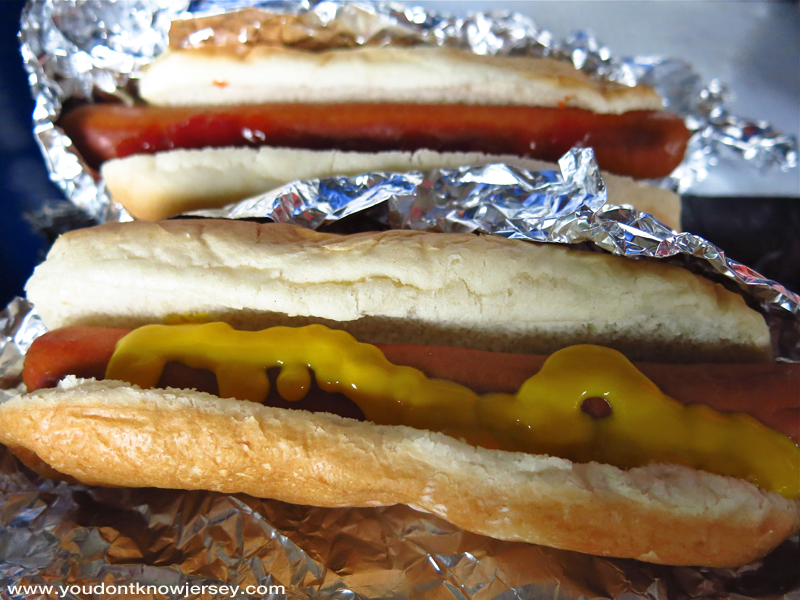 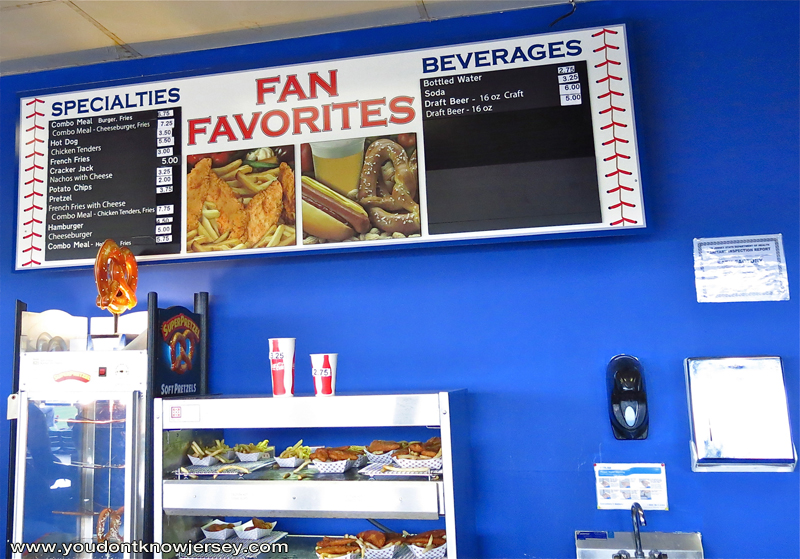 Ruppert the mascot was in attendance but we never saw his friend, Effa.  Ruppert and Effa are named after Jacob Ruppert, a 1930’s Newark Bears owner who is a celebrated man in sporting, political and business history, and Effa Manley, who was the first female owner and business manager of a professional baseball team – the Newark Eagles – and the only woman inducted into the National Baseball Hall of Fame. 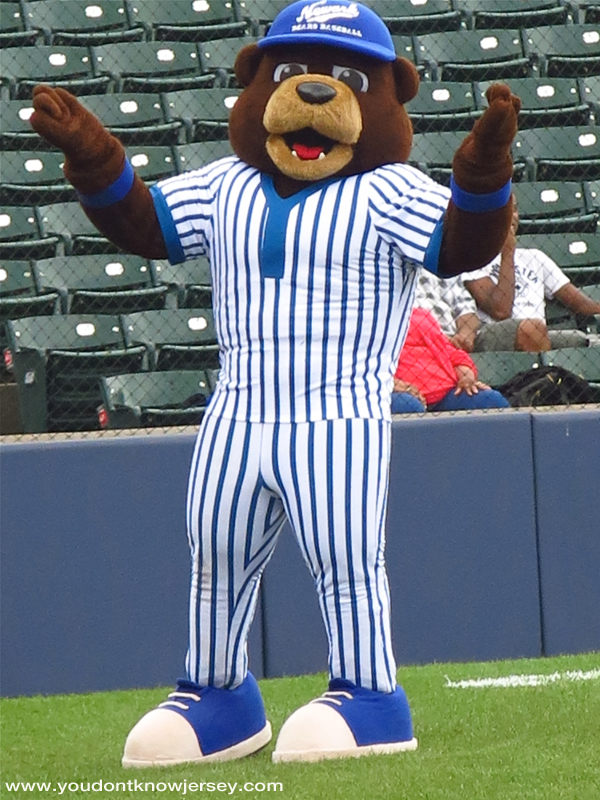 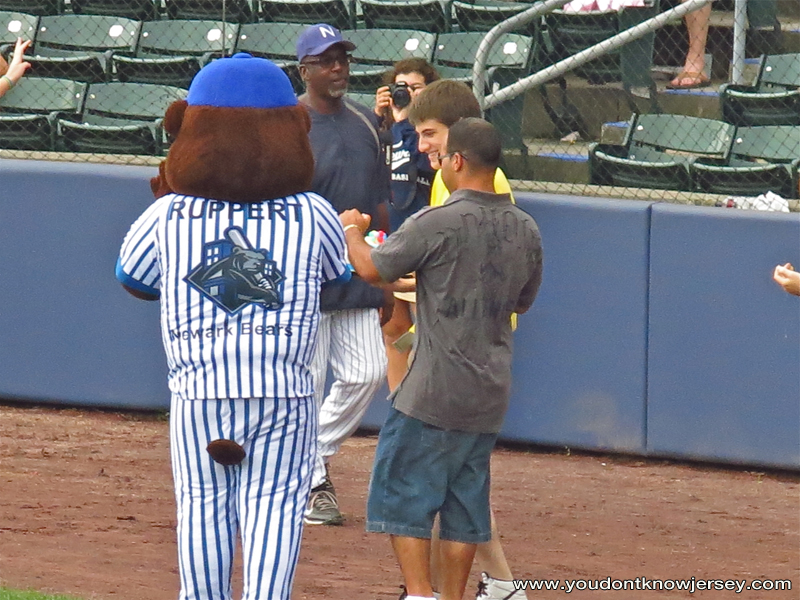 The Honey Bears were there, too!  A dance team that comes out between innings, the Honey Bears not only dance they also do giveaways and interact with the crowd.  This is the first team we’ve seen in NJ that had dancers and they were nice.  There should be more dancers! 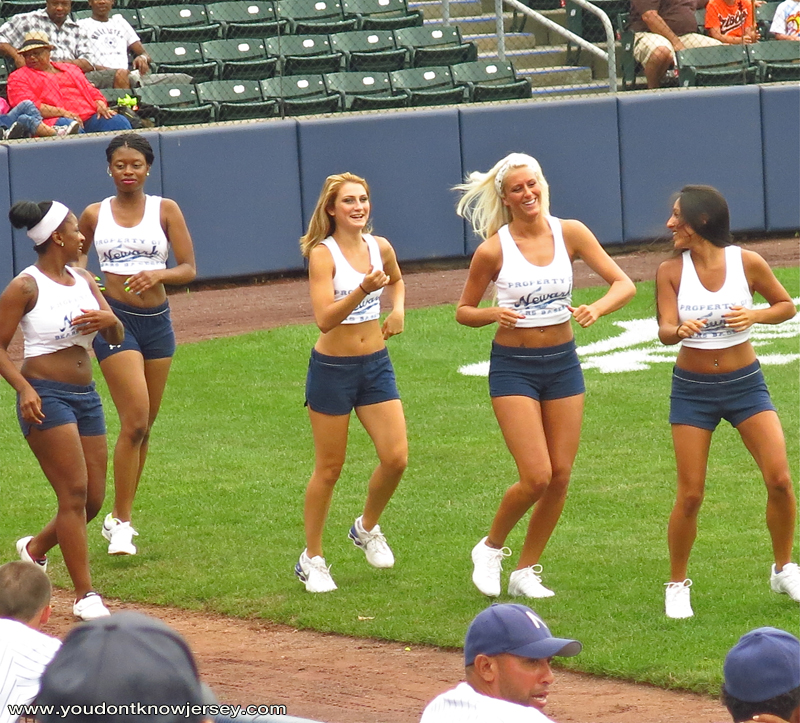 They had a few other intra-inning amusements like a birthday cake for a staff member and the “twirl around a baseball bat and then try to run” game. 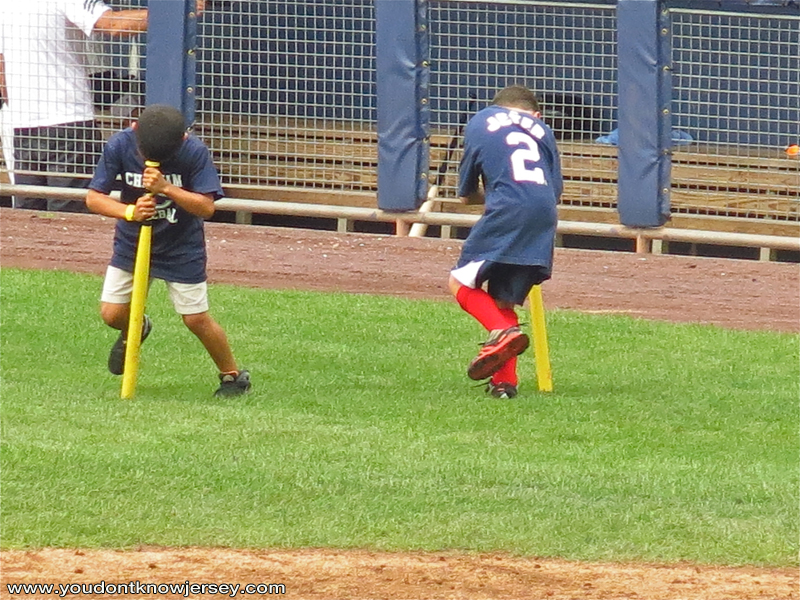 Newark has a rich history of baseball and we were happy to see that reflected in the stadium name and also in this mural commemorating the Negro League Eagles.  Inside the stadium there’s even a championship pennant up for the Eagles! 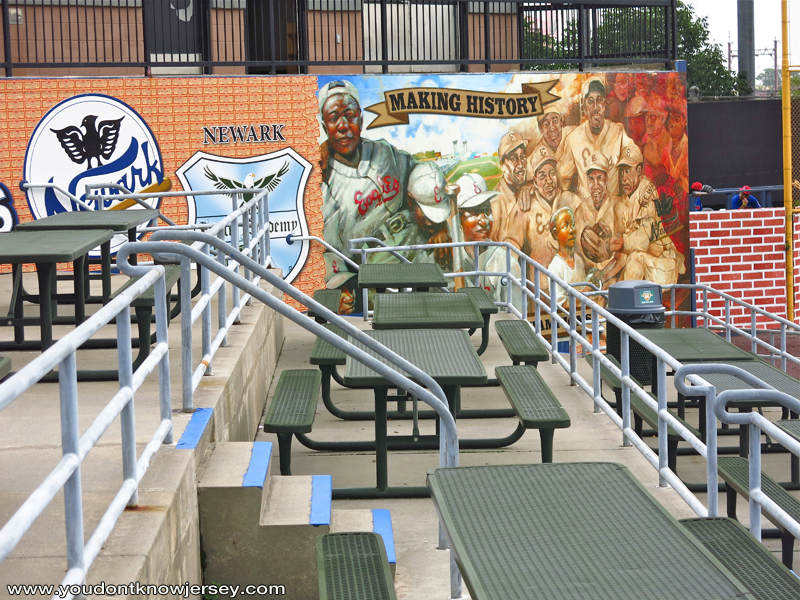 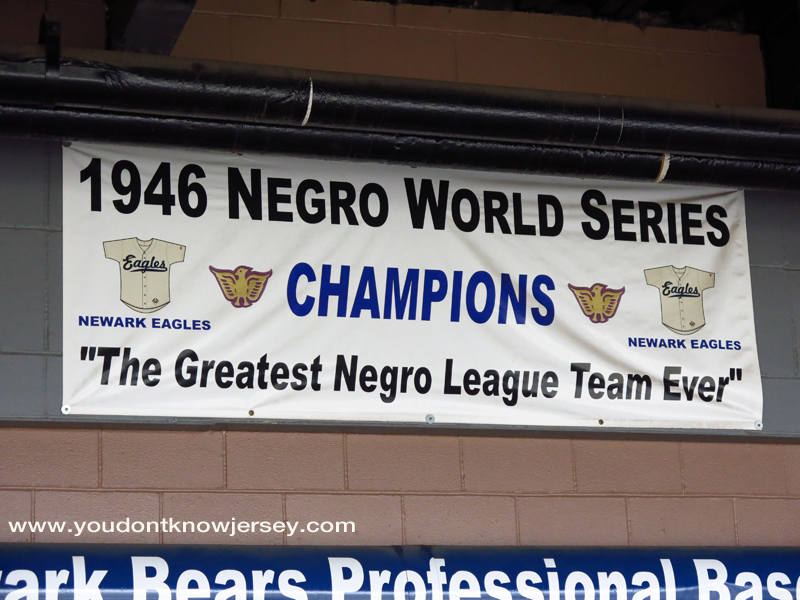 Unfortunately, near the end of the game the rain started coming down and the crowd moved behind the stands while the game continued. 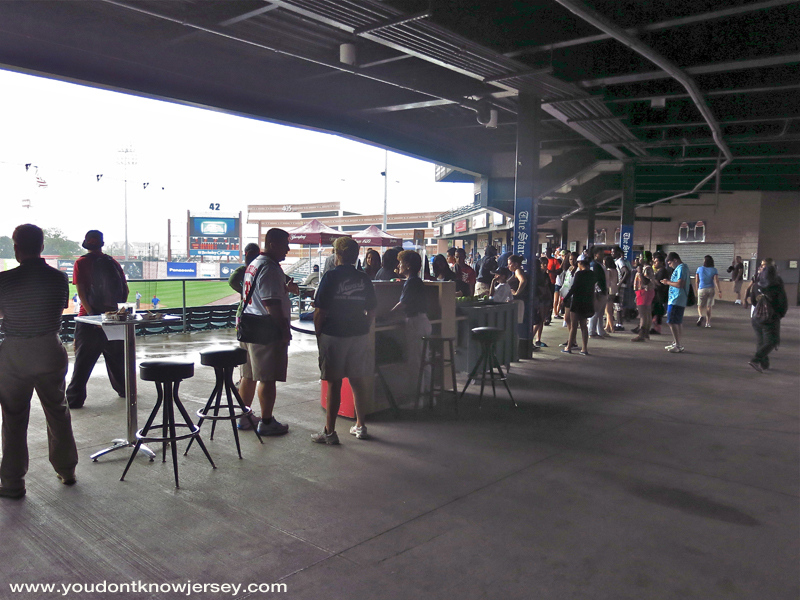 Shortly after we all moved out of our seats, the tarp came out.  The rain delay didn’t last long, thankfully, and the game was finished pretty quickly. 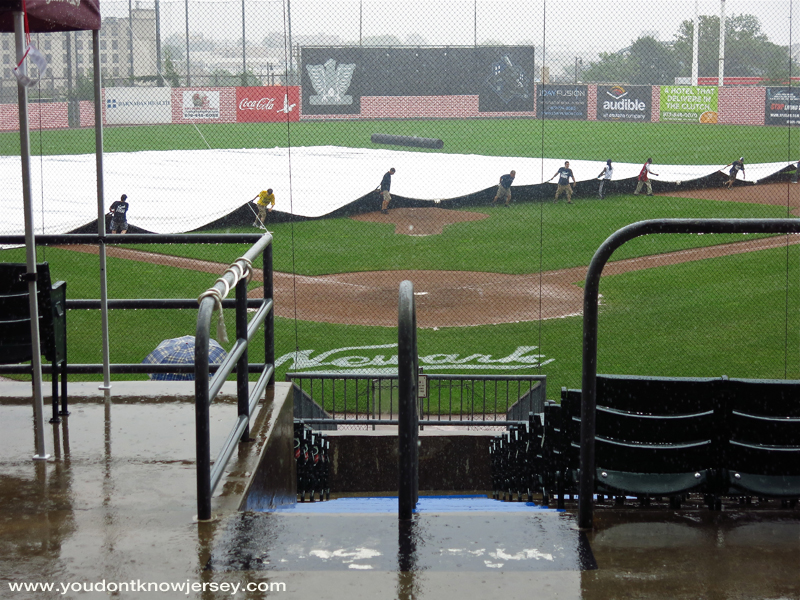 We enjoyed our day with the Newark Bears and you should go, too!  The tickets were very reasonably priced and the stadium is very easy to get to by car, train or bus.  Why not spend an afternoon watching some good old baseball to round out the summer?