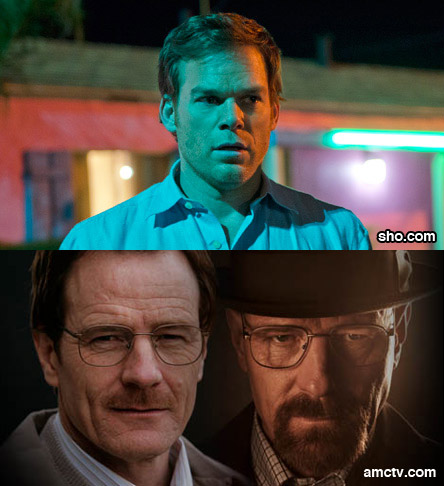 This article contains SPOILERS. Do not read if you haven’t seen all the episodes of Dexter and Breaking Bad!

Each show has a unique and complex main character : Dexter has Dexter Morgan, a serial killer that kills serial killers. Breaking Bad has Walter White, a science teacher that begins cooking Crystal Meth when he learns he is dying of cancer. Each show is centered around them.

1. Dexter/Walt have done bad things but with good intentions.

Walter White from Breaking Bad is a school teacher that learns he has cancer and is going to die and decides to cook Crystal Meth with an ex-student so that he can make enough money to make sure that his family is set after he dies. Although this season his motives have become a little twisted.

2. A character that has a close relationship to Dexter/Walt has a mental breakdown.

Debra, Dexter’s sister has a breakdown as a result of shooting and killing another police officer to protect Dexter from being caught. She is trying to live with shooting an innocent woman just trying to vindicate a falsely accused friend. Debra made an attempt to confess everything at the Police Station which would have exposed everything that Dexter has done.

Jesse, Walter’s Meth Cooking partner is having a breakdown as a result of some of the things that Walt has done like killing his friend Mike. It has only gotten worse since he realized that Walt poisoned Brock. Jesse is scared of Walt and is now a threat in that he may expose everything that Walt has done.

3. Dexter/Walter’s main goal is to not get caught for what they’ve done, put it behind them and move on with the rest of their lives.

Dexter has met his true love Hanna and just wants to move far away from Miami and start a family with her and his son. Dexter’s marriage to Rita was always messy because he had to lie about his killing but with Hanna he can be completely honest and everything is okay. He has found the perfect situation but it is in jeopardy from a variety of outside forces.

Last Season it looked like Walter had everything all tied up nice and neat. He retired from the Meth business after his wife showed him the truly ridiculous amount of money he had amassed. He eliminated all the loose ends that could talk and cause problems and he handed off the business to a new regime. He was honest with and mended his relationship with his wife and got his kids back. Everything was going fine and it looked like he was going to live happily ever after until Hank found the book and figured out who he was.

4. Will Dexter/Walt die at the end of the season?

I really don’t think Dexter will be die and I could go either way on him being found out. Dexter hasn’t really broken his code or done anything that would make the audience turn on him. The only reason why the writers may have him exposed would be to exonerate Doakes and Laguerta. That is really the only thing in the history of Dexter that seems unfair as a result of Dexter’s legacy.

Dexter has already made it clear that he is leaving Miami. He is trying to leave with his soulmate Hanna. I feel that he might get away but she may be killed before they can leave together. If the writers really like Dexter, they will let him get away and be happy but I don’t think he will be that lucky. It has already been talked about in interviews that the ending of Dexter will be open to interpretation whatever that means. It should be interesting.

As far as Walter White is concerned, he has done plenty of things to make the audience rightfully turn on him. Not quitting the business when he should have and killing multiple people unnecessarily including Mike which was unforgivable. Poisoning Brock was his first real misdeed even though he planned it out so that he wouldn’t die. I think that Walter will die, or that he will be forced to kill someone that he can’t live with killing and have a breakdown and either kill himself or turn himself in and confess.

If we are still supposed to like Walt and be on his side, I expect him to possibly make one final dramatic act that shows his humanity to redeem himself in the end before he dies. It really should involve his relationship with Jesse. Obviously we know he cares about and looks out for his family. That was never in question. The relationship that has always been rocky over the course of the seasons is the one between him and Jesse. If he has anything to prove about his character it must be to Jesse.

5. Dexter/Walt are going out on top.

While some television shows are produced for as many seasons as possible until their ratings wither and die, both Dexter and Breaking Bad are having some of their highest ratings late in their runs. Coming into its 8th and final season, Dexter’s Season 7 finale was Showtime’s highest rated original programming ever, period. Breaking Bad’s 5th Season Part 2 Premiere had 5.9 million viewers nearly double the previous season and 4 times the ratings that the first season was getting.

We should know the answers to all of these questions in a couple of weeks.

6. These were 2 of the best shows ever on television and now they are both ending around the same time.

This is obviously only a similarity and coincidence to me from my own subjective point of view. However it leads me to a personal viewing similarity. When I first heard about Dexter weeks before the first episode aired I thought that the concept was wild and ambitious. I knew that the only way it would work is if it was written well. Taking an outrageous idea and writing it in a way that makes sense truly turned out a masterpiece of a show and character.

Once I began to watch Dexter I soon realized that my anticipation of the next episode was greater than it had ever been for any other TV show that I have ever see, even LOST. Every Sunday night when the episode ended, I could not wait for the next episode to air. The show was so much fun, outrageous and crazy but at the same time serious and grounded with a great character and the full range of emotions that any good show has.

I remember the moment I knew that Dexter was a truly great show. It was when he had a husband and wife on his kill table and he was about to kill them for being in charge of an immigration ring where they were charging people money to help them in to the country and then just killing them when they got here so they didn’t have to make good on the rest of the deal. Dexter was having trouble in his own relationship with Rita and after noticing that they had been together for a long time, he asked them what the success to a long lasting relationship was. They threw in their 2 cents mentioning common interests and some other stuff I don’t remember. You could see their desperation as they answered his question as well as their feelings toward each other as they were facing death. Dexter then thanked them, told them that their advice was helpful and proceeded to kill them both. The mixture of humor and pathos was so amazing and set the tone for the great things to come.

I didn’t watch Breaking Bad from the beginning when it was on originally. I actually watched the first 3 seasons on Netflix over the course of about a week. I got the same feeling of anticipation as I watched Breaking Bad where right from the beginning I couldn’t wait to see the next episode. In this case of course I didn’t have to wait. I could gorge myself on episodes until I ran out and it was amazing. The show’s tone was exciting filled with tension and dark humor. Breaking Bad brought things to a fever pitch so often the show was at times exhausting to watch, but in a good way.

Losing these shows is going to leave a huge void in my television viewing. Yes, there are some interesting new shows like Bates Motel and Under the Dome but they are really not on the same level as Dexter and Breaking Bad. I am very sad to see them both go.

Pin It
Previous post:
This Week in Veggies – What’s Fresh at Your Local Farmers Market Next Post:
The Undead Will Rise Again for The New Jersey Zombie Walk – An Attempt to Reclaim the Guinness World Record