James van Riemsdyk is a forward for the Toronto Maple Leafs and will play for the USA Men’s Hockey team in Sochi. 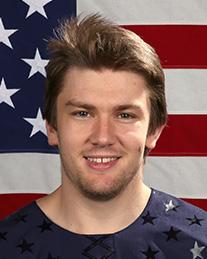 He goes by JVR and was born in Middletown. He attended Christian Brothers Academy in Lincroft where he played from Mite to first year of Midgets for the Brick Hockey Club in Brick. Before his sophomore year, he transferred to Ann Arbor, Michigan for his sophomore year to play for the U.S. National Team Development Program.

While attending the University of New Hampshire, he was drafted second overall by the Philadelphia Flyers in the 2007 NHL Entry Draft – following fellow American Patrick Kane, marking the first time in league history that Americans were chosen first and second overall in the same draft. On April 1, 2009, the Philadelphia Flyers announced that van Riemsdyk would forgo his final two years of college eligibility to sign an entry-level NHL contract for the 2009–10 season; he spent the remainder of the 2008–09 season playing for the Philadelphia Phantoms on an amateur tryout contract.

On June 23, 2012, Van Riemsdyk was traded to the Toronto Maple Leafs in exchange for Luke Schenn.

Pin It
Previous post:
It’s Official: Jeff Langum of Voorhees Has the Best Beard in the World Next Post:
Things to do in Jersey – January 17 18 19 2014