John Carlson is a defenseman for the Washington Capitals and will play on the USA Men’s Hockey team. 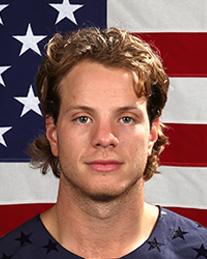 John was born in Natick, Massachusetts but lived most of this life in Colonia.  He began his ice hockey career with the New Jersey Rockets Youth Hockey Organization of the Atlantic Youth Hockey League. He attended St. Joseph High School in Metuchen for three years before he attended Cathedral High School in Indianapolis.

Carlson played in the United States Hockey League with the Indiana Ice in 2007–08, but signed to play for the London Knights of the Ontario Hockey League in 2008–09.

Carlson made his professional debut for the Capitals’ AHL affiliate Hershey Bears on May 2, 2009 in a Calder Cup playoff game versus the Wilkes-Barre/Scranton Penguins. The following night he scored his first professional goal in Game 2 of the series. Carlson made his NHL debut for the Capitals on November 21, 2009 against the Toronto Maple Leafs. On January 21, 2010, Carlson was recalled by the Capitals. Carlson would go on to score his first NHL goal against Cam Ward of the Carolina Hurricanes on March 25, 2010.

Pin It
Previous post:
Movie Review – Paranormal Activity : The Marked Ones Next Post:
It’s Official: Jeff Langum of Voorhees Has the Best Beard in the World