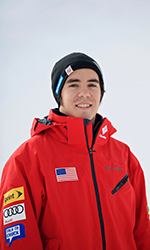 Mike Rossi is from Long Valley and is an aerial athlete in Freestyle Skiing on the U.S. Ski and Snowboard team. He’s 19 years old and last year was a major breakout year for him. He finished in third place at the Deer Valley World Cup event and finished the season with five top-15 results to catapult him from the C-team to the B-team.Rossi has been skiing since he was four but wasn’t actively skiing a lot until he tried a water ramp camp in Park City and found out he was pretty good.  When he’s not skiing, he likes playing guitar, writing music and recording songs.