In honor of today’s New Jersey Super Bowl, we bring you this New Jersey First. The first intercollegiate football game was played by Rutgers and Princeton in New Brunswick on November 6, 1869. Rutgers won 6 to 4. 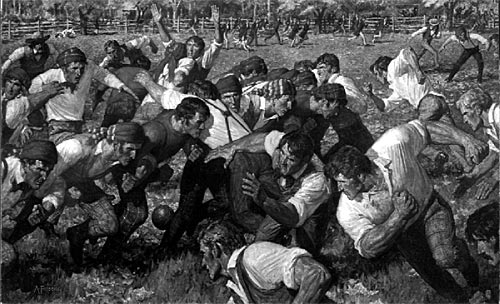 Rutgers University and Princeton played on a field where the Rutgers gymnasium now stands in New Brunswick.  The game was played with two teams of 25 men each using rugby-like rules. Rules were decided upon by the captains of each team, both of whom would later become very prestigious names in New Jersey. William J. Leggett, captain of the Rutgers team who later became a distinguished clergyman of the Dutch Reformed Church, suggested that rules for the contest be adopted from those of the London Football Association. Leggett’s proposal was accepted by Captain William Gunmere of Princeton, who later became Chief Justice of the Supreme Court of New Jersey.

At 3 p.m. on a November Saturday, the 50 players and about 100 spectators gathered on the field. Spectators sat along a wooden fence and Rutgers students and players turned their scarlet-colored scarfs into turbans to distinguish themselves from the Princeton group.

Read more about the game here.