The zipper was invented in Hoboken and was first manufactured by Hoboken’s Automatic Hook & Eye Company. 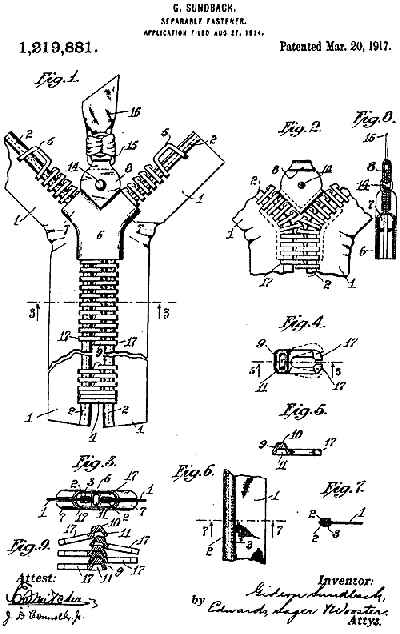 The modern-day zipper was developed by Gideon Sundback, a Swedish-American engineer employed by the Automatic Hook and Eye Company. Sundback improved on previous attempts at a zipper several times before coming up with his “Separable Fastener.” He won the patent for his zipper on March 20, 1917. After developing the machines needed to mass-produce the device, he established the Hookless Fastener Company, based in Meadville, NJ.

The first orders for the “Separable Fastener” came from the U.S. Army Air Service and the U.S. Navy. It first came to the public’s attention in 1921, when the B.F. Goodrich company used them on a line of rubber galoshes, which were marketed as “Zipper Boots.”

Zippers were used primarily on boots and tobacco pouches for the first twenty years or so of their existence, but in the 1930’s a sales campaign began for children’s clothing featuring zippers, praising them for promoting self-reliance in children by making it possible for them to dress themselves.