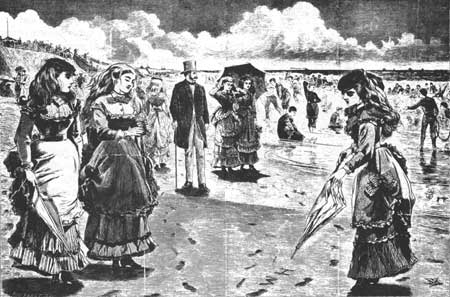 The late 18th and early 19th Centuries brought the first seashore resorts in the United States in Cape May and Long Branch well before the Civil War.  Cape May claims 1761 as their founding year and Long Branch is a little lax on official dates but also claims its birth in the 1700’s.

The towns used their proximity to Boston, New York, Philadelphia and Washington DC to their advantage and built the first communities specifically geared toward tourists. Tuckerton and Long Beach Island also include themselves in some of the earliest resorts.

From the National Park Service’s history of resorts and recreation:

Guidebooks advised that the Jersey Shore was part of a well-established resort industry, by the end of the Civil War. In 1868, vacation planners could consult The Book of the Summer Resorts to determine which destinations corresponded with their desires and budgets. … Guests of the best hotels at Niagara, Long Branch, (Fig. 1) Newport, or Cape May could expect to spend $50 per week.

Cape May and Long Branch may claim precedence as the “first Jersey shore resort,” but nineteenth-century historians considered Tucker’s Beach the earliest resort in the area. According to Woolman and Rose, publishers of an 1878 atlas, “it is supposed that Reuben Tucker’s house on Short Beach was the very first and oldest house on the coast of New Jersey that was opened for the entertainment of health and pleasure seekers.” Tucker acquired the property at the southernmost part of Long Beach, known as Short Beach, sometime between 1725 and 1765. His popular boardinghouse for sportsmen was described as “a one-story house with a hipped roof and front piazza, standing 500′ from the shore” and “elevated on a heap of sand and shells.” Fishermen and game-bird hunters from Philadelphia took stagecoaches to Tuckerton and then sailed to the beach. After his death, Tucker’s wife supervised the business, which continued to operate as “Mammy Tucker’s Inn.”

Around the turn of the nineteenth century, wave-action separated the beach from the “mainland” forming a four-mile island. Because of its harbor location and proximity to Long Beach, Tuckerton became the mainland stop for visitors traveling to Tucker’s Island and Beach Haven. “In the early days of the summer boardinghouses on Long and Tucker’s beaches, city boarders to these houses by the sea, reached Tuckerton by the stages, and then embarked in sailboats for the beaches.” [7] When the Pennsylvania Railroad completed its bridge across the bay to Long Beach, Tuckerton was annexed from the main line. Baymen solved their transportation problem by navigating the abandoned tracks in “Clamtown Sailcars,” railroad flatcars rigged with masts and sails.

We think Long Beach and Tucker’s Beach, in point of earliest attraction as a seashore resort for Philadelphians, must claim the precedence. They had their visitors and admirers long before Squan or Deal or even Long Branch itself had got their several fame. To those who chiefly desire to restore languid frames and to find their nerves new braced and firmer strung, nothing can equal the invigorating surf and genial air.

Pin It
Previous post:
Governor Christie Pays a Lawyer $1 Million of Our Tax Dollars to State that He is Innocent Next Post:
El Matador Mexican Deli, Bloomfield – Review