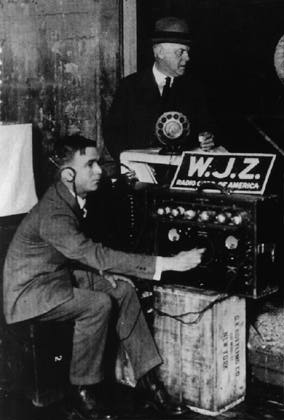 The first radio broadcast of the World Series was transmitted live on radio station WJZ in Newark in 1921. The NL New York Giants beat the American League New York Yankees 5 games to 3 (and one tie).

On October 5th, a Newark sportswriter arranged for a telephone hookup from the Polo Grounds in Manhattan and phoned in balls and strikes to WJZ Newark. The game was broadcast from a tiny shack atop the Westinghouse building in Newark at Orange and Plane streets. 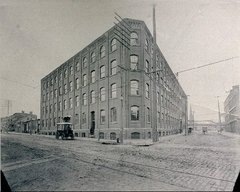 WJZ was among four pioneer stations that Westinghouse set up in 1920 and 1921. The World Series idea was employee Tommy Cowan’s. He worked for Thomas Edison in West Orange and came to Westinghouse to learn the new art of broadcasting. As the New York Giants took the field against their rivals and stadium mates, the New York Yankees, Cowan hustled to the little shack on the roof of the Westinghouse building at Orange and Plane streets and pressed a telephone to his ear. Harry Nash of The Sunday Call delivered the play-by-play into the phone and Cowan repeated it into the microphone.

Pin It
Previous post:
Things to do in Jersey – March 14 15 16 2014 Next Post:
Tesla Being Forced to Close Stores by NJ Car Dealership Lobby Group