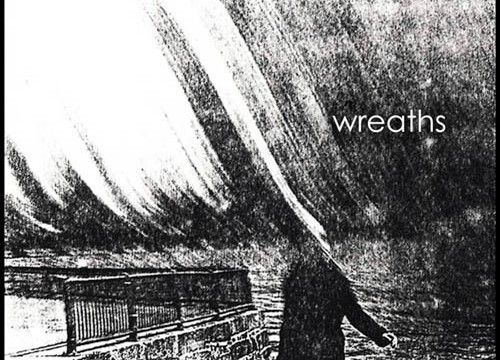 We first heard of Wreaths when we saw they were on the bill for the Asbury Music Awards last year. While they were setting up, fog machines filled the Stone Pony stage with a dense cloud of white haze. Under deep red lights the stage took on a slightly sinister appearance while they warmed up. What exactly was this band—who had won that night’s award for Top Avant-Garde Act—going to sound like? We were greeted with a huge wave of guitar sound that flowed from the stage and seemed to wrap around us like the fog that was by then flowing steadily from the machines. The groove-heavy base was strong and the drums were loud. And that was just the first song. We were floored.

The Asbury Park band’s music has been described in a multitude of ways. Fuzz, drone, space, experimental, shoegaze and more. Though there are certainly elements of all these genres in the music, don’t be misled by those descriptions. This band can rock as well. Having three guitarists that let their instruments mesh, meld and overlap each other contributes to the big sound. The rhythm section holds all of this together. The keyboard adds many textures of space rock and psychedelia. With all of this going on you think the music would slide into chaos but it doesn’t. One song could have a noisy, kinetic, seemingly free-for-all vibe and the next can take the same instruments and create a subtle, drone, chill-out tune.  I would describe the Wreaths sound as an aural melange of harmonious discord. 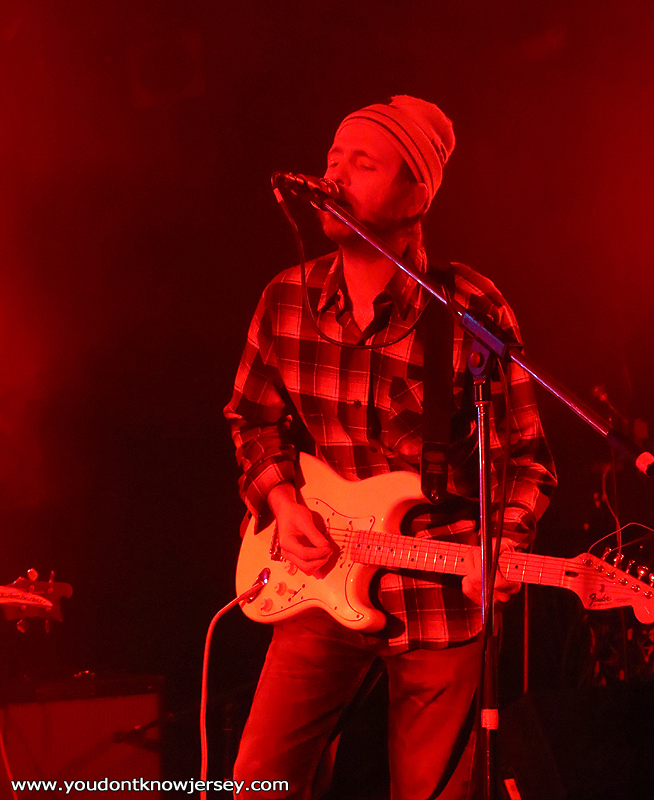 The band just released their eponymous debut album on Killing Horse Records and it is an amazing, spacey, road trip of a record. The opener “Coke Straw” sets the tone for what follows.  The song begins with lush guitar work and steady drum beat before the laid-back, dreamy vocals lure you in. “Goin’ Back to Haiti” is a 13 minute jam that slowly builds from a funky, fuzzy bass and keyboard riffs to full out guitars and pounding drums until all of these sounds entwine together and roll around leading to a blistering finish.

“Piedmont Aire” sounds like it could be a single with its quiet intro segueing into an uptempo beat. All of the songs are excellent. “The Designing Women of Asbury Park” is an interesting instrumental that begins with a sample of what sounds like an ominous argument between two dudes over a sinister bass and twinkling guitars moving into a wah wah keys and intricate guitar work. The heavier slinky closer, “I Love Me, Dark Wizard” reminds me of some of the groovier tunes from The Stone Roses and is a great song to end the album with. 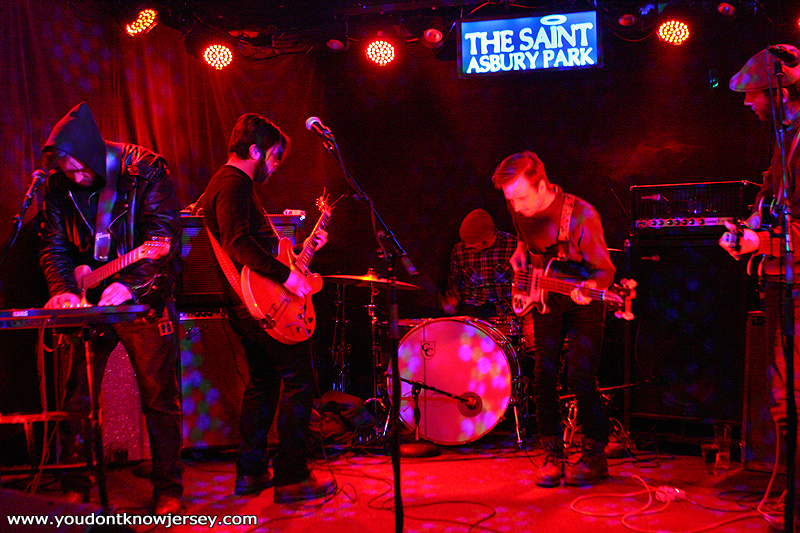 We caught Wreaths at Lot 13 in Bayonne last weekend. The venue wasn’t as big as the Stone Pony or Asbury Lanes and there were no smoke machines on this night, no brilliant red lights. In fact, they band pretty much played in the dark, the only light being from the neon beer signs that lined the windows. No matter. They were still as powerful as when we first saw them live. That says a lot about the talent here. Can’t wait to see what Wreaths come up with next.

Shaun was cool enough to answer a few questions for us:

How did you guys get together and how did the name Wreaths come about?

Long story? Why not? Ralph had a band called SPARKS FLY FROM A KISS and I (Shaun) filled in on a tour on bass down to North Carolina where we somehow ended up back at Colin’s (drums) house to party. There’s an album called the Swell they made that got lost in the mixing stage that I would like to hear one day. Anyway, Ralph & I always got on playing together and became better friends and when I finished the first GLASS TREES record I moved out to Joshua Tree to chill out and make some sun baked music and Ralph moved to Laguna Hills for a job, my house flooded in JT so I moved in with him for a few weeks and there we made the first cassettes of a collaboration. That was short lived as we both moved back to Jersey for life reasons then Ralph moved to Chicago and a few months later I joined him. Ralph was giving me a ride to work one morning and we drove by a hand painted red sign that said WREATHS on it. Nothing else. Just somebody selling wreaths on the side of the road. It looked pretty mean so we chose the moniker. We got a Hammond organ with a Leslie speaker off Craigslist, bought cheap guitars and effects and a cassette 2 track and started making drone tapes. At the time we were also playing Glass Trees shows since that record had started to get some press (though very minimal), with Ralph on drums and our new friend Aaron Roemig on bass. We did that for about a year and then both found ourselves down at the Jersey shore separately, so Ralph came over one day and we recorded ‘Sundown’ by Gordon Lightfoot on a newly acquired 8-track and we had fun so we booked a show in Asbury to get things moving and get us in gear, started writing some songs…then as the show approached we thought a full band would be more fun then playing to our drum machine. Lo and behold Ralph came to have dinner where I was working (Langosta Lounge) and Colin was bartending and recognized Ralph from WEfest from years earlier, and we had our drummer. I had recorded Kevin Beegs awesome garage band BOYFRIENDS in the basement and thought he was a great bass player so we got him into the mix, we were looking for some keys to bring out the drones we had began with back in Chicago and Colin introduced us to Jamison Lauer who we hit it off with, who also had just gotten back from having a record store in San Diego, and the band stuck. Long story, warned you.

The album was recorded over 2 years and in 4 different studios yet it still sounds cohesive. How did you manage that?

Well, we don’t do anything fancy. We have always recorded live in a room together and we all love gear and studios and so when we make a few bucks from some shows, we go record. We like checking out new places so it keeps us trying new things but at the end of the day it’ll be us in a room.

There is a lot going on in the songs sonically with many layered vocals and instruments. Can you tell us a little about your recording process?

We do basic tracks live then overdub the vocals and add textures as we hear them in our heads. We try to minimize the overdubbing process because it is a rabbit hole you can end up doing forever, but it’s fun so we do dabble.

We’ve heard the band described as drone, shoegaze, dream, and psychedelic rock among others. Do you mind these attempts to classify the music?

Not at all. Bring em on.

Wreaths is based out of Asbury Park which is blessed with a thriving scene at the moment. What does Asbury Park and the music community there mean to the band?

It’s great to have places to play. It’s definitely great to be around a lot of musicians and we have made a lot of friends. I’m thankful our band got on our feet here. Thank you Asbury Park.

We’ve read you are currently heading into the studio to record a follow-up to this debut. How is that coming along? Any experimenting with new sounds?

I’m excited. We went in and recorded 11 songs in a day. We have a lot of combing through and we probably are going to break those 11 songs into 2 records because I was doing some editing and 5 songs clocked in at 51 minutes, so some decisions need to be made, but those are fun decisions. So we will probably take 7 or 8 songs and focus on them for now. We are trying to knock this one out quick because we took our sweet time with the debut on KILLING HORSE RECORDS. We definitely are experimenting with new sounds all the time. We all buy and trade new gear all the time and anytime we go into a studio we use what’s around. If anyone would like to donate old synths or have gear laying around, bring it on.